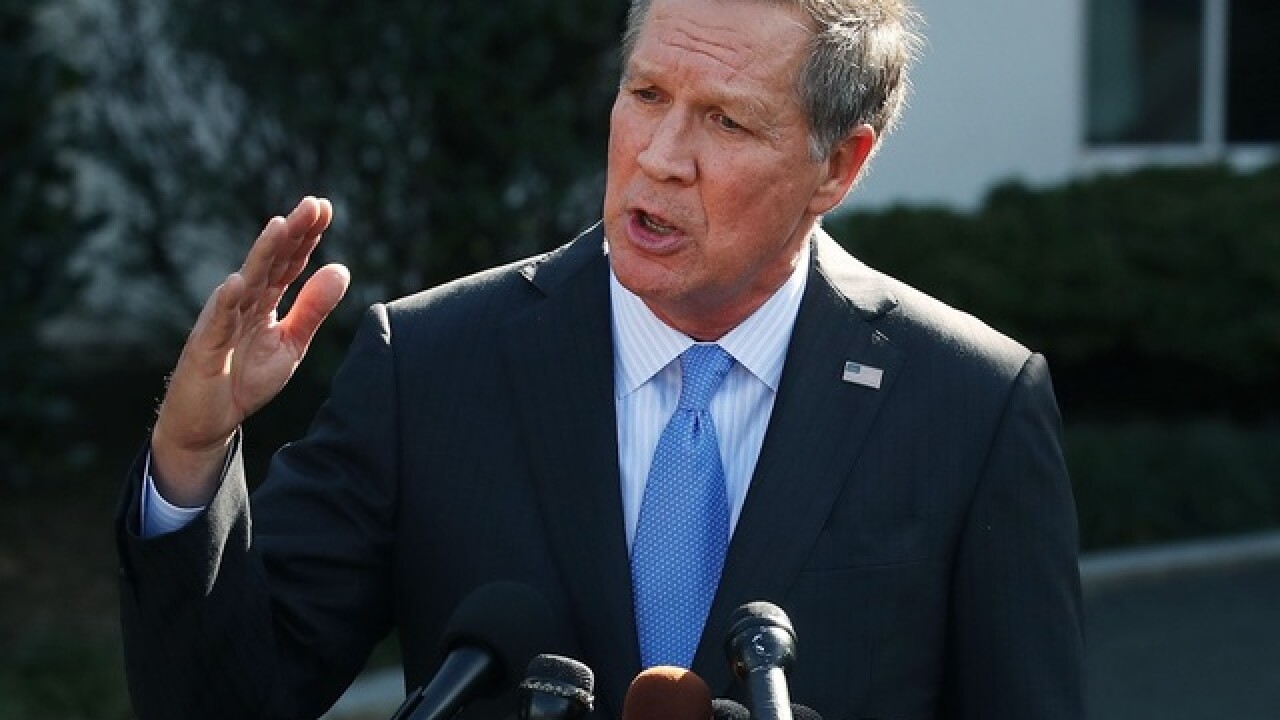 CINCINNATI -- One Ohio politician wants to help teachers with concealed carry training. Another wants President Donald Trump to take some leadership -- and then abruptly changed a campaign website that touted his own pro-gun bona fides.

Both men waded into the debate over gun violence Sunday, less than a week after a former student killed 17 people at Marjory Stoneman Douglas High School in Florida.

"I was talking to a friend of mine this morning, he's a big gun collector," Kasich recalled. "I said, 'If all the sudden you couldn't buy an AR-15, what would you lose? Would you feel as though your Second Amendment rights would be eroded because you couldn't buy a goddarn AR-15?"

Kasich made it clear he wasn't looking for "some outright ban" but urged small steps, such as background checks. The term-limited governor is a frequent guest on Sunday morning talk shows, where he often criticizes Trump. He urged the president, his former rival in the Republican primary, take leadership on the issue.

"This is a great opportunity for common sense steps that can be taken. ... Mr. President, I ask you to do this. You don't have to boil the ocean, but take some steps now," Kasich said.

As Cleveland.com reported in early December, Kasich's words on gun control frequently contradict his past actions as governor.

While The National Rifle Association gave him an "F" rating for his time in Congress -- when he voted for the federal assault weapons ban -- he later said he didn't think the ban worked.

As governor, he's signed bills allowing gun owners to carry concealed weapons in bars and other places that serve alcohol, on college campuses that permit them and in the public areas of airports. He also signed legislation that reduces the amount of training people need to take to get a concealed handgun license from 12 to eight hours, according to the Buckeye Firearms Association. The NRA endorsed him in his 2014 gubernatorial race.

State Sen. Cecil Thomas, D-Cincinnati, told Cleveland.com most of the recent gun bills have come from the pro-gun lobby.

Many people speculate Kasich could challenge Trump for the 2020 nomination by running as a moderate Republican. A "Second Amendment" page on Kasich's campaign website abruptly changed Sunday, after his CNN appearance. Previously, it outlined how he'd "signed every pro-2nd amendment bill that has crossed his desk to defend this basic, constitutional right." By Sunday evening, it referred to him as a "pragmatic conservative" who believed Americans should learn from the uptick in school shootings and evolve:

John Kasich has spoken out on the need for reasonable reforms to prevent future massacres – including the potential of expanding background checks on gun sales and limiting the ability to sell weapons that have often been used in mass killings. As Governor, he recently challenged a bipartisan working group of gun owners and gun control advocates to find common ground that will protect the 2nd Amendment and save lives.

In Ohio, districts must authorize teachers and staffers to carry concealed weapons in the building. Edgewood City Schools adopted a concealed carry policy in 2013, according to the Dayton Daily News. It was not immediately clear Sunday evening if other county districts have similar policies.