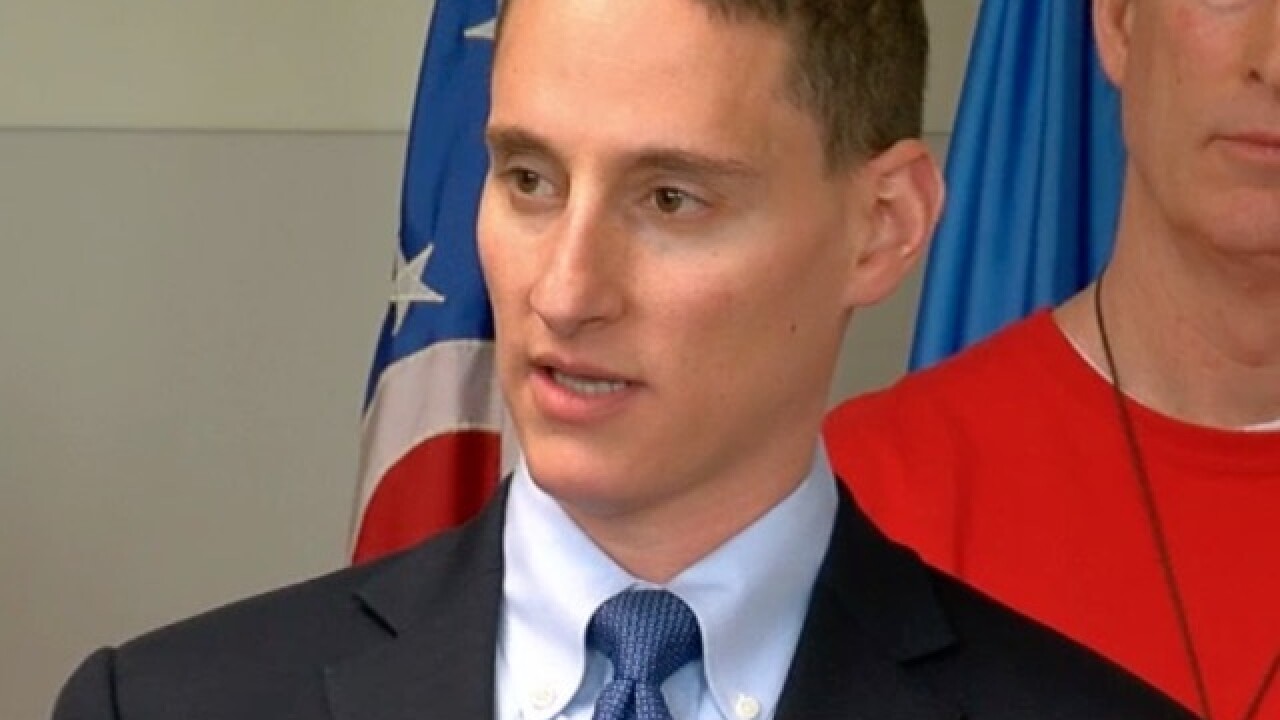 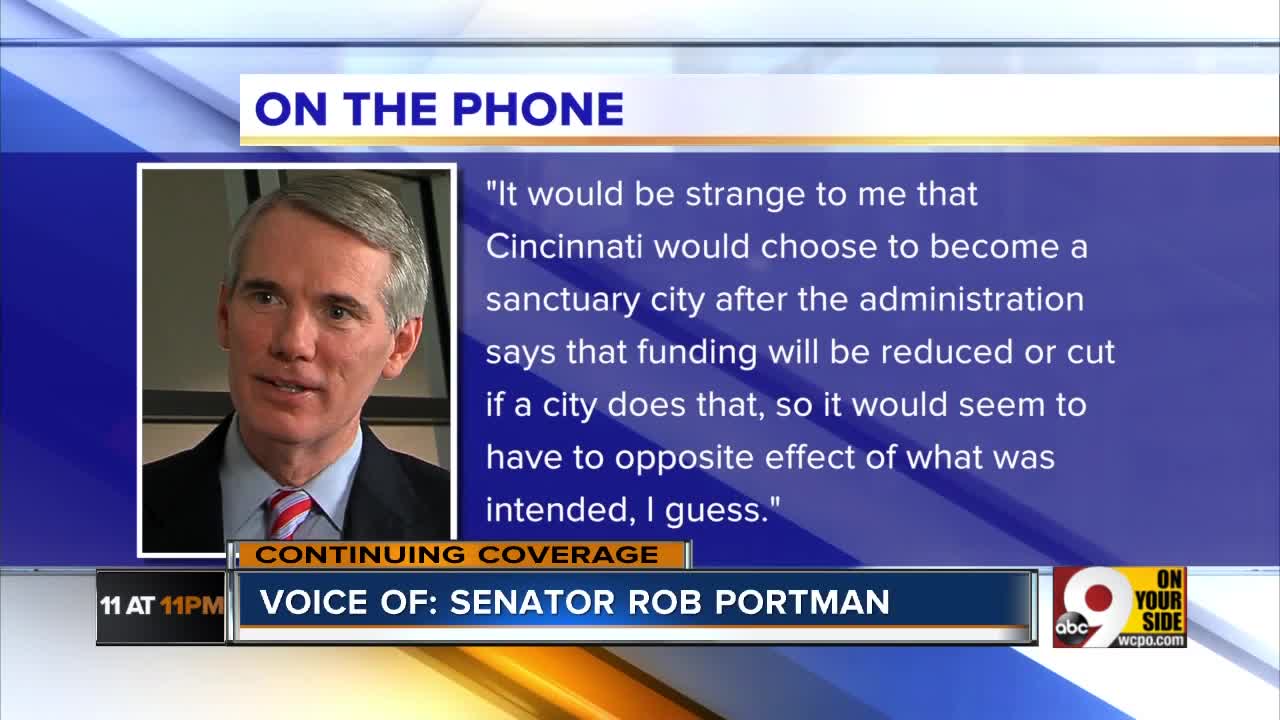 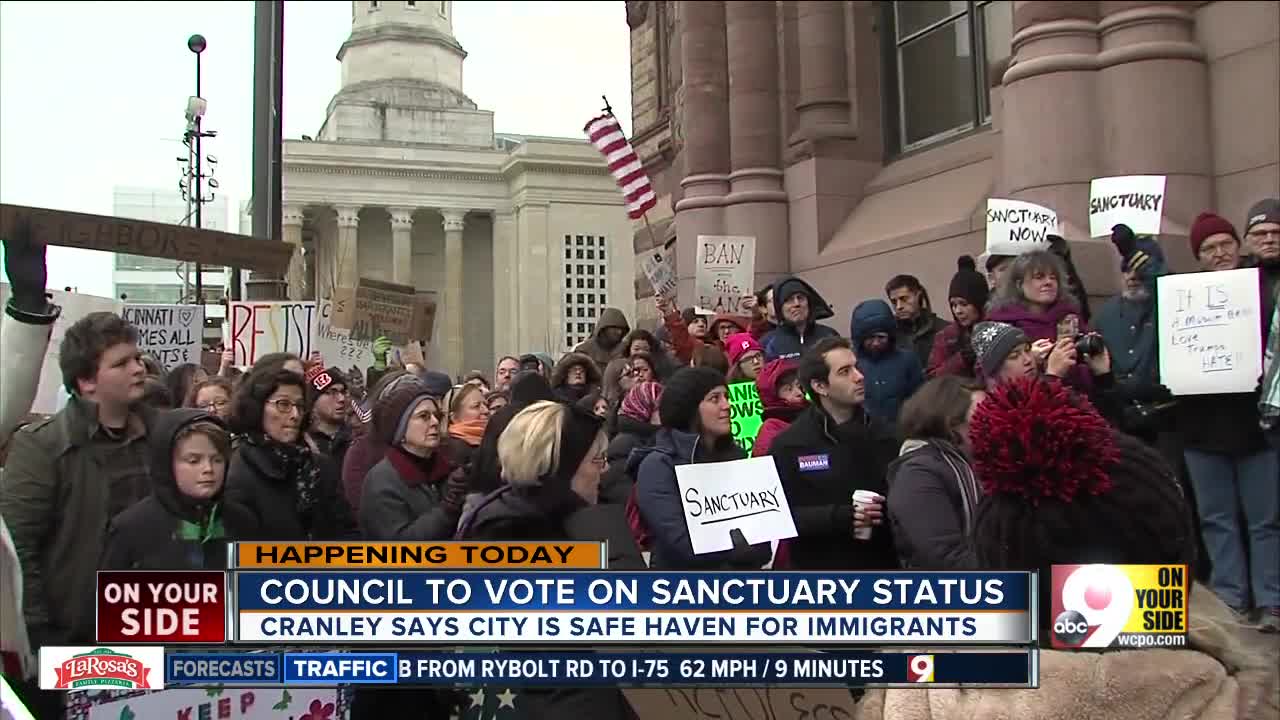 CINCINNATI -- Three Ohio Republicans -- one each from the city, county and state levels -- challenged local Democrats Tuesday over Mayor John Cranley's claim that Cincinnati is a "sanctuary city."

Ohio Treasurer Josh Mandel, running against Democratic Sen. Sherrod Brown, first turned his focus to Muslim refugees, an issue he tried to link to illegal immigration. He called out a recent attack at The Ohio State University committed by Abdul Razak Ali Artan, a Somali refugee.

"Although Mr. Artan, the perpetrator of the attack at Ohio State, was a legal resident, eliminating law enforcement will allow other terrorists to go unwatched and unnoticed while future attacks are planned," Mandel said.

He also said cities shouldn't be allowed to disregard federal law and questioned what message Cincinnati might send to immigrants who came to the United States legally, calling to mind his grandparents who'd immigrated here.

"Unfortunately, we have people like John Cranley and others who are trying to play politics with this great tradition we have of immigrants coming here in a legal way and building our country to be economically strong, to be religiously strong and to have strong communities," Mandel said.

This weeks's dueling news conferences came from two politicians vying for elected office -- Mandel to the United States Senate, Cranley for a second term as Cincinnati's mayor. And both were a response to President Donald Trump's executive order withdrawing funding from sanctuary cities that decline to cooperate with federal immigration authorities. The president signed a separate order temporarily banning citizens from seven Muslim-majority countries from entering the U.S.

At his event Monday, Cranley announced no changes to how the city operates ; for nearly two years, he said, Cincinnati police have had a policy that they're not in the business of enforcing immigration law -- a position experts say is perfectly legal.

Still, Hamilton County Commissioner Chris Monzel, a Republican, said he was working to ensure the county didn't lose any funding based on Cranley's declaration.

And it became clear Monday afternoon that the county and city weren't exactly on the same page: Hamilton County Sheriff Jim Neil, a Democrat, said he'd continue to detain undocumented inmates at the request of federal immigration authorities -- a move the crowd at the Republicans' event applauded.

"People are asking me whether I'm taking the conservative or liberal side, and I tell them I’m taking the side of the law," Neil said in a statement to WCPO. "I was elected sheriff, and as sheriffs we don’t write the laws like legislators, we enforce the laws, whether federal, state or local."

Suspects arrested by Cincinnati police officers for serious crimes are typically processed through the Hamilton County jail. If deputies are unable to identify a person in custody, they can contact Immigration and Customs Enforcement for help. ICE may then request the county jail detain the person to await immigration hearings, said Michael Robison, the media director for the sheriff’s office.

There is no legal definition of a "sanctuary city," and the term has been used widely and loosely across the nation. But often, a sanctuary city is defined as an area that does not honor ICE detainer requests.

Asked what he might do as Ohio's treasurer to stop Cincinnati from being a sanctuary city, Mandel didn't offer a direct response.

"I'm here today, we're trying to rally the people of Cincinnati to call, to email their city officials, Mayor Cranley, the City council to show up at the meeting and convince them that making Cincinnati a sanctuary city is bad for the city, bad for the residents and bad for our country," he said.