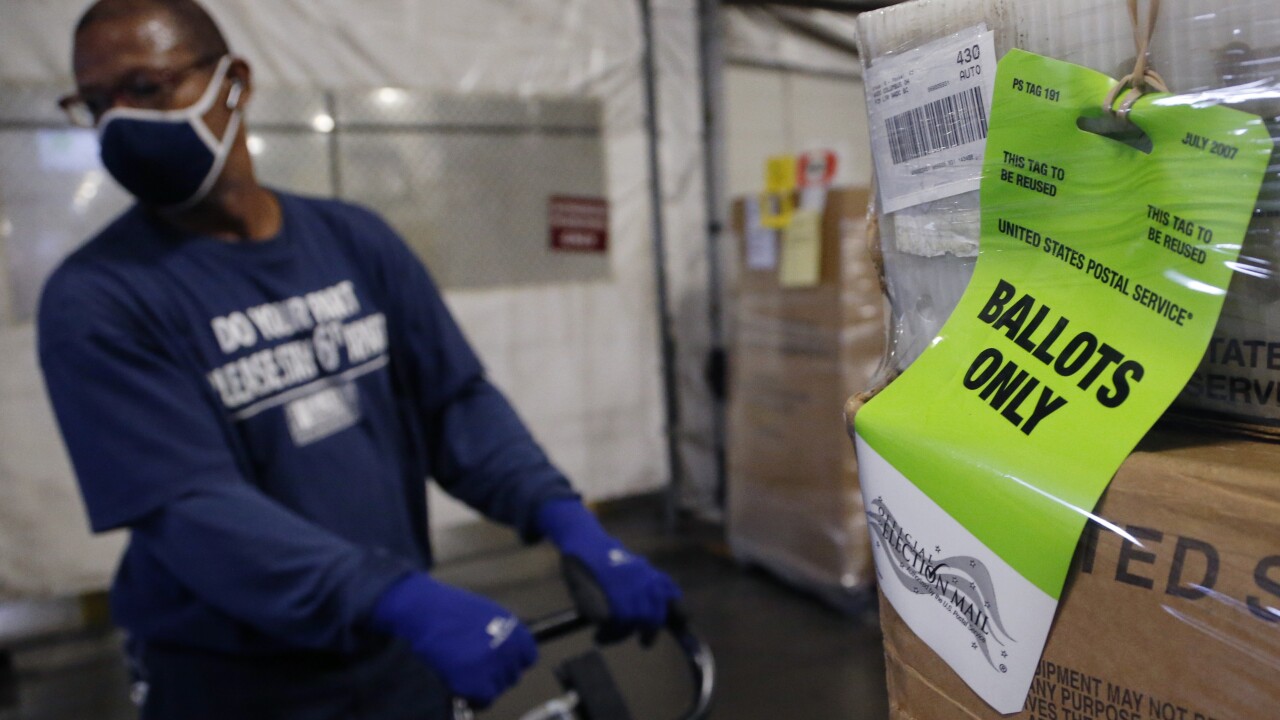 (Copyright 2020 The Associated Press. All rights reserved. This material may not be published, broadcast, rewritten or redistributed.)
Jay LaPrete/AP
E.E. Ward Trucking employee Danny Crawford delivers blank absentee ballots to the U.S. Postal Service Monday, Oct. 5, 2020, in Columbus, Ohio. The ballots are being mailed on Tuesday, the first day of early voting for Ohio in the Nov. 3 election. (AP Photo/Jay LaPrete)

COLUMBUS, Ohio (AP) — Ohio’s secretary of state adjusted his one-box-per-county restriction Monday to say counties may collect absentee ballots both at their buildings and at locations outside, an update to an order that has landed him in both state and federal court.

Republican Secretary of State Frank LaRose characterized his revised order as a “clarification” in a case that has highlighted the interest in access to ballot drop boxes amid coronavirus concerns, cuts at the U.S. Postal Service and President Donald Trump’s baseless assertions that mail-in voting is rigged.

LaRose said his order always allowed Ohio’s 88 county boards to collect ballots at various locations around their own property — though that is not how Democrats and voting rights groups who sued had interpreted it. It is often the more urban, Democrat-heavy counties that lean toward drop boxes.

The new directive requires Ohio’s 88 county boards of elections to accept absentee ballots around the clock at secure receptacles at their central offices and also clears them to set up “convenient drive-through ballot drop offs” outside.

“Outside” is not defined, but LaRose’s office said it means on the board’s property. The order does not mention the word “property,” however, which may ultimately cause some confusion. In Cuyahoga County, for example, LaRose gave special approval to a second drive-thru drop box that’s located across the street from the board, on property owned by Cleveland State University.

Another board, in Athens County, said it needed special permission from his office just to offer drop boxes at both its front and back entrances.

Ohio Democratic Party Chairman David Pepper accused LaRose of not keeping his word to allow counties to spread out their drop-off locations, a convenience for voters amid the coronavirus pandemic.

“Frank LaRose pledged publicly that he would allow expanded drop box locations if he were allowed under Ohio law,” Pepper said in a statement. “We proved our case, and he lost, showing that drop boxes are permitted in multiple locations in Ohio counties. Now he’s going back on his word with a transparent, cynical ploy.”

A state appellate court made clear Friday that LaRose was free under Ohio law to rescind his earlier order and issue a new one.

In its decision, the 10th District Court of Appeals found that if LaRose wanted to expand the number of ballot drop boxes beyond a single location per county, he was within his authority, but that it wasn’t appropriate for a court to order him to.

The three-judge panel agreed with a lower judge that LaRose’s directive was not reasonable, a victory for Democrats who had brought the legal challenge. A separate challenge to the one-drop-box-per-county directive was filed in federal court in Cleveland.

However, they also said the order didn’t violate state law and so did not deserve to be blocked — a victory for LaRose and Republican groups, including the Trump campaign, that supported the limitation.

LaRose pledged to work with the Legislature to clarify the law — but not before this year’s election, for which voting begins Tuesday.

The decision to simply clarify the order was in the spirit of not causing chaos so close to the election, LaRose said.

State Republican Chairman Jane Timken commended LaRose for a move she said will protect the integrity of the election.

“With just 29 days standing between now and Election Day, Ohio Democrats want to cause confusion amongst voters and chaos at our boards of elections,” she said in a statement.

Elections officials in Hamilton County, which includes Cincinnati, on Monday showed off a new, expanded voting center as they prepared for early voting to begin Tuesday. They leased a neighboring 15,000-square-foot space, more than double the usual center’s space in Norwood, Ohio.

“We feel that we are well prepared,” Sherry Poland, elections director, told journalists.

Voters will be greeted by a sanitizing station that includes masks if they don’t have them, and then will be directed to lines with markings 6 feet apart.

Officials are encouraging early voting ahead of Election Day on Nov. 3 and are urging people who are voting by mail not to wait until the final days and risk their votes not arriving in time to get counted.

Poland said strong turnout is expected, although she pointed out there is no history of what voting is like during a pandemic.

(Copyright 2020 The Associated Press. All rights reserved. This material may not be published, broadcast, rewritten or redistributed.)
Ohio