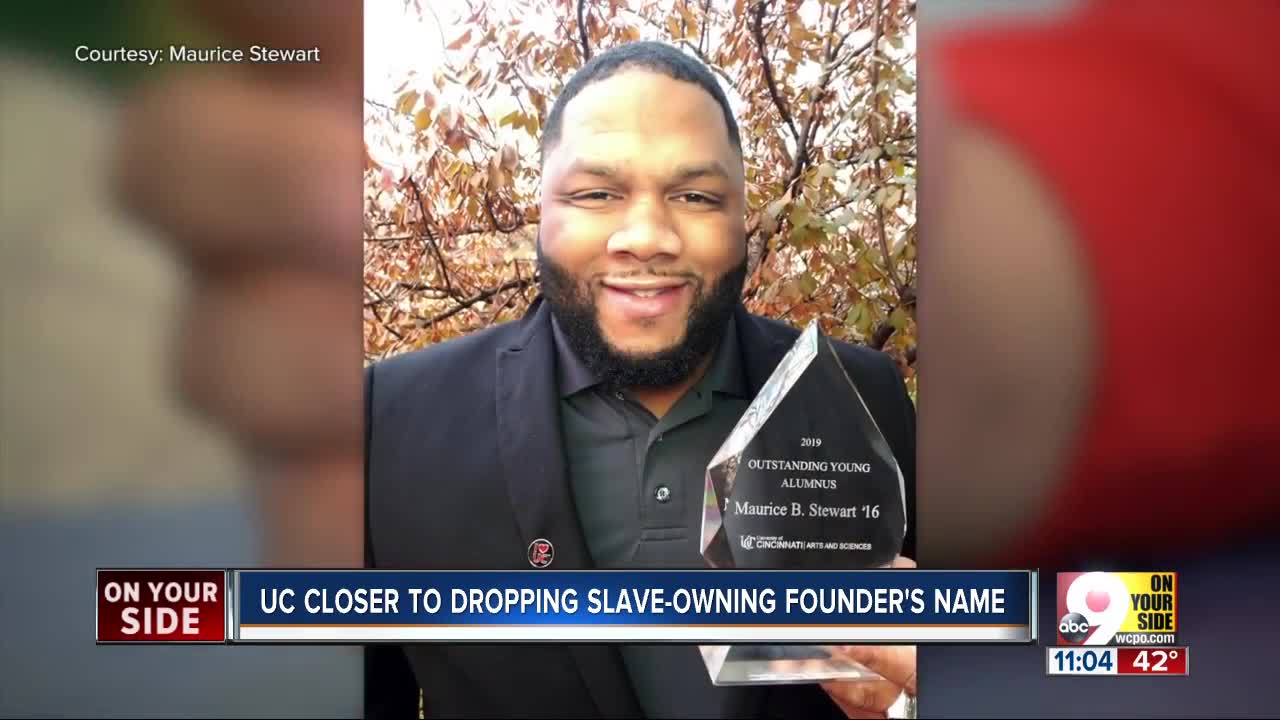 The name of Charles McMicken, a 19th-century businessman and slaveowner who helped found the University of Cincinnati, has been a perennial source of controversy for years. In 2019, a study recommended dropping the name from the school's college of arts and sciences. UC president Neville Pinto agrees. We talked to Maurice Stewart, a decorated alumnus, about why he believes dissociating from McMicken's legacy is the right choice.

CINCINNATI — Maurice Stewart is a Bearcat to his bones, but the 2016 graduate and recently-awarded Outstanding Young Alumnus covers up part of his diploma with a yellow Post-It. It’s the part that doesn’t make him proud to have attended, he said: The part that identifies the school from which he graduated as the McMicken College of Arts and Sciences.

"I'm a proud alum of the college, but I think there's some things we can do to right some wrongs,” Stewart said Friday night.

WHERE THIS STORY STARTED: University of Cincinnati grapples with the legacy of slave-owning founder Charles McMicken

Charles McMicken, the 19th-century businessman and slaveowner for whom the college is named, donated a plot of land that would eventually become UC upon his death in 1858. With the bequest came specific instructions that it be used to create a school “where white boys and girls might be taught.”

“I don’t think we have to celebrate people that have that kind of mark in history,” he said of McMicken. “I know you can’t change history — history is what it is, it’s how we got here today — but I think there’s a way of going about it. We don’t have to highlight it.”

In a statement, Pinto endorsed a recent report’s recommendation to discontinue the use of the McMicken name when referring to the college, adding that buildings and places bearing his name should be paired with digital displays that add context.

He hopes the recommendation, which will become policy if approved by UC’s Board of Trustees, will send a clear message to students past and present that all of them are valued by the university, even if they might not have been by one of the men who posthumously helped build it.

Ideally, he added, he would like to have his diploma re-printed without McMicken’s name on it. A university spokesperson said all graduates can order a new degree at any time, and that the process might be modified if the board of trustees votes to change its policy about McMicken’s name.