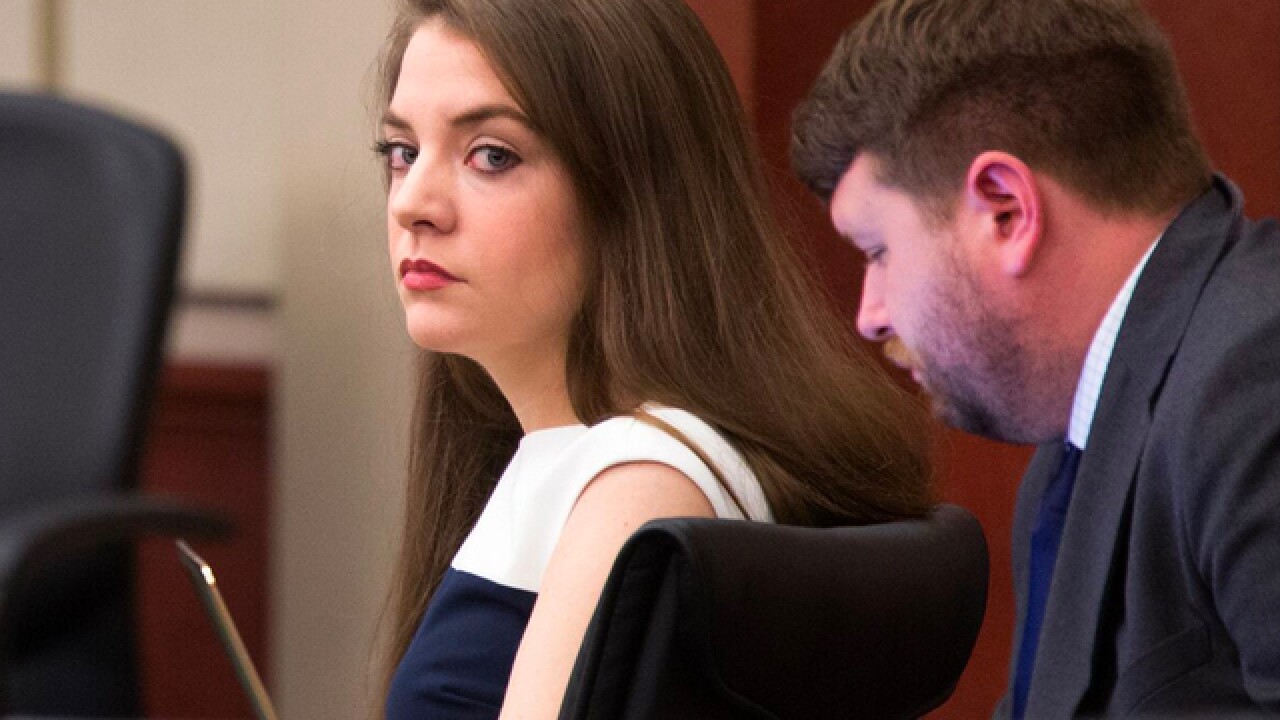 Copyright 2018 Scripps Media, Inc. All rights reserved. This material may not be published, broadcast, rewritten, or redistributed.
Liz Dufour | pool photographer
<p>Shayna Hubers, 27, looks into the courtroom in the Campbell County Courtroom of Judge Daniel Zalla for her retrial in the shooting death of Ryan Posten, 29, on October 12, 2012 in his apartment in Highland Heights. Hubers, who was convicted in 2015 and sentenced to 40 years, was granted a retrial after her attorney discovered a juror in the first trial had a prior felony conviction. (Photo by Liz Dufour | pool photographer)</p>

NEWPORT, Ky. -- Shayna Hubers' story of a physical struggle before she shot and killed boyfriend Ryan Poston did not match the scene officers discovered at his Highland Heights condo, police testified Wednesday in the second day of Hubers' retrial.

Hubers was in 2015 convicted of murdering Poston and sentenced to 40 years imprisonment, but the revelation that one of her jurors had been a felon forced a judge to overturn that conviction and allow her another day in court.

Just as they did in her first trial, prosecutors have presented a narrative that depicts Hubers as dangerously unhinged and desperate to prevent an imminent breakup with Poston; her defense team has argued she was the victim of long-term abuse that forced her to take drastic self-defense measures.

"We got into a huge fight before all this happened, and he got upset," Hubers previously said of her alleged fight with Poston the night of Oct. 12, 2012. "He was screaming at me."

She added he had also bodily thrown her around the apartment, and she grabbed a gun from a nearby table to defend herself. Poston would be discovered dead of six gunshot wounds after Hubers' subsequent call to police.

DAY ONE: 'I gave him his nose job:' Jury watches police interview

Sgt. David Fornash of the Highland Heights Police Department said on Wednesday the evidence didn't square with her story.

"Miss Hubers said that she was thrown around," he said. "We noticed that there wasn't anything knocked over, that was knocked down."

Fornash was the first officer at Poston's Highland Heights condominium after the 911 call about the shooting. He said that there were various items on the dining room table, where Poston was shot.

"If it went how Miss Hubers said, it would be knocked over," he said.

Commonwealth's Attorney Michelle Snodgrass asked if Fornash saw any tears from Hubers while she was in custody.

Some of the six shots that killed Poston were fired from fewer than two feet away, forensic pathologist Dr. Gregory Wanger said.

Wanger performed the autopsy on Poston's body. He said Poston had been shot in the head, face, chest and side.

Many of the shots were fired in a downward direction, Wanger said. That's consistent with the prosecution's claim that Hubers stood over Poston for some of them. He said he could tell how close the muzzle of the gun was to Poston's skin by gunpowder residue.

"The gun is close enough that, in addition to the bullet, some bits of powder have also struck the skin," Wanger said. "And for a typical handgun, that distance from the muzzle to the skin is under two feet."

The doctor added that all six bullets were recovered from Poston's body. There were no exit wounds.

The defense has argued that Poston was standing when he was shot, but Wanger testified the shots show he was sitting at the dining room table.

Just 11 days before Hubers killed Poston, she sent a text message to a friend stating that she wanted to shoot him.

"When I go to the shooting range with Ryan tonight, I want to turn around, shoot him and kill him and play like it's an accident," Hubers wrote in a text to friend Christine Oyler.

Oyler testified Wednesday that Hubers sent her the message on Oct. 1., 2012, but she said she didn't really pay attention to it when she received it.

The defense will present its own theory of what happened when it begins its case next week.

Hubers has smiled at her defense team and family members but otherwise shown little emotion during the retrial so far.

The trial will continue Thursday.