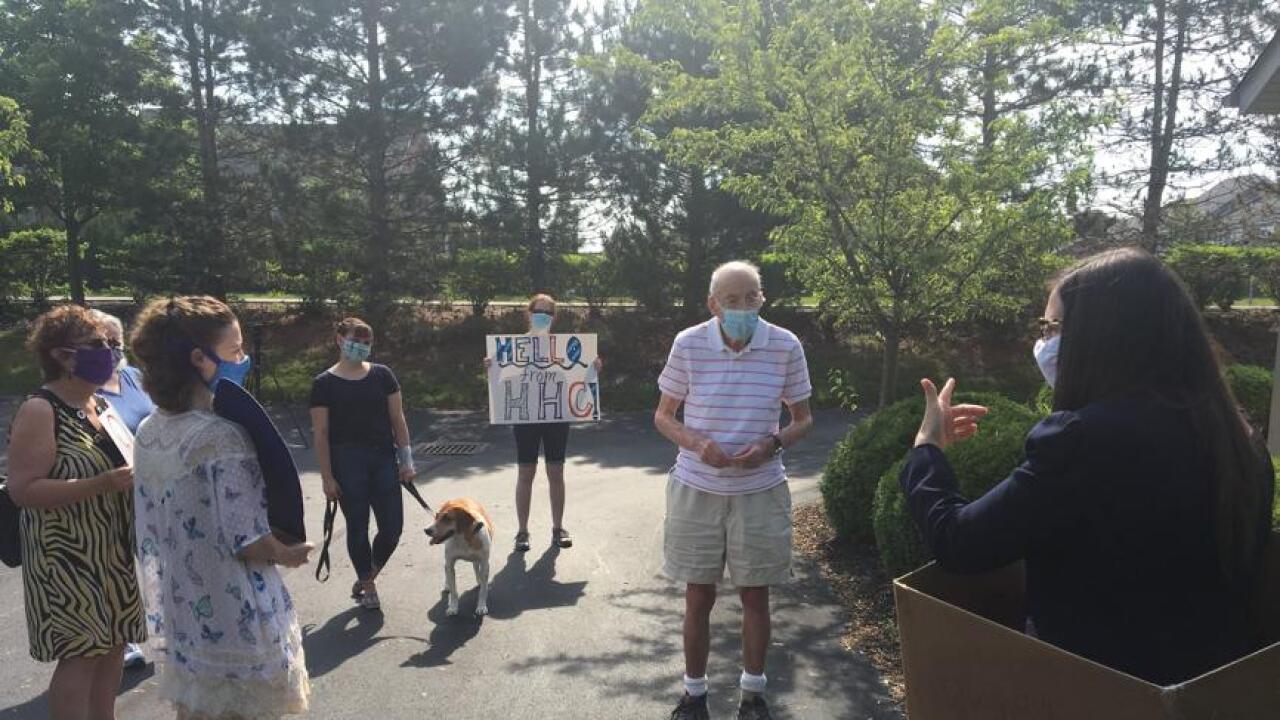 Laurel Pfahler
Al Miller who was honored Thursday, June 4, 2020 with a social-distanced visit at his home in Mason from several staff members of The Nancy &amp; David Wolf Holocaust &amp; Humanity Center, where Miller serves as a guest speaker.

Miller was born in Berlin, Germany, in 1922. He lived under Adolf Hitler’s dictatorship from 1933-37 before escaping to Switzerland and eventually immigrating to America in 1939. Miller, 97, a former Hamilton optometrist, said the atrocities committed under the Nazi regime came from believing “absurdities that Jews were responsible for all misfortunes.”

“Don’t do to others what you don’t want done to yourselves,” said Miller, who was honored Thursday with a social-distanced visit at his home in Mason from several staff members of The Nancy & David Wolf Holocaust & Humanity Center, where Miller serves as a guest speaker.

“We can always learn from the past,” he continued. “We can learn a lot of things from the past. We can see other things that go on that we don’t seem to learn. We do the same things over and over again. Whatever went wrong, we do it again.”

According to the Journal-News, Miller was somber speaking about his past experiences and the present struggles he witnesses in the news, but expressed joy in seeing his friends from the Holocaust & Humanity Center. Staff members of the museum are honoring local Holocaust survivors with drive-by, social-distance parades throughout the month as a way to thank them for their commitment to the Center’s mission amid the COVID-19 pandemic.

Most of the survivors involved with the Holocaust & Humanity Center are in their 80s and 90s and have been quarantined and unable to see family members and friends for months because of the novel coronavirus. The museum has taken its guest speaking tour series to a digital platform via Zoom, and every Wednesday survivors or children of survivors participate in sharing their experiences and messages that can be learned from the Holocaust.

Miller, who has been involved through the center’s 20 years, usually speaks about 50 times a year but will conduct his first Zoom appearance next Wednesday.

“It’s hard for him,” Holocaust & Humanity Center CEO Sarah Weiss said when asked about Thursday’s visit. “He’s been active his whole 96 years of life and now he’s still healthy and active and vibrant but he can’t do what he feels called to do in terms of sharing his story and going out, so it’s just an opportunity to connect.”

Weiss said Miller “has such an important message” to share, as he usually weaves his survival story with his memories at the 1936 Olympics when Hitler refused to shake hands with Jesse Owens, the winner of four gold medals.

“What we learn from the survivors is the resiliency of humanity, the power of the human spirit,” Weiss said, noting that moving speakers to a digital platform has brought in new audiences from around the globe and other parts of the U.S.

Miller said he looks forward to getting back to speaking, now that he has been set up with the technology to participate. Asked why he feels called to share his story, Miller said because “people forget.”

“People don’t care what happened so long ago, … and that gets to me,” he said.