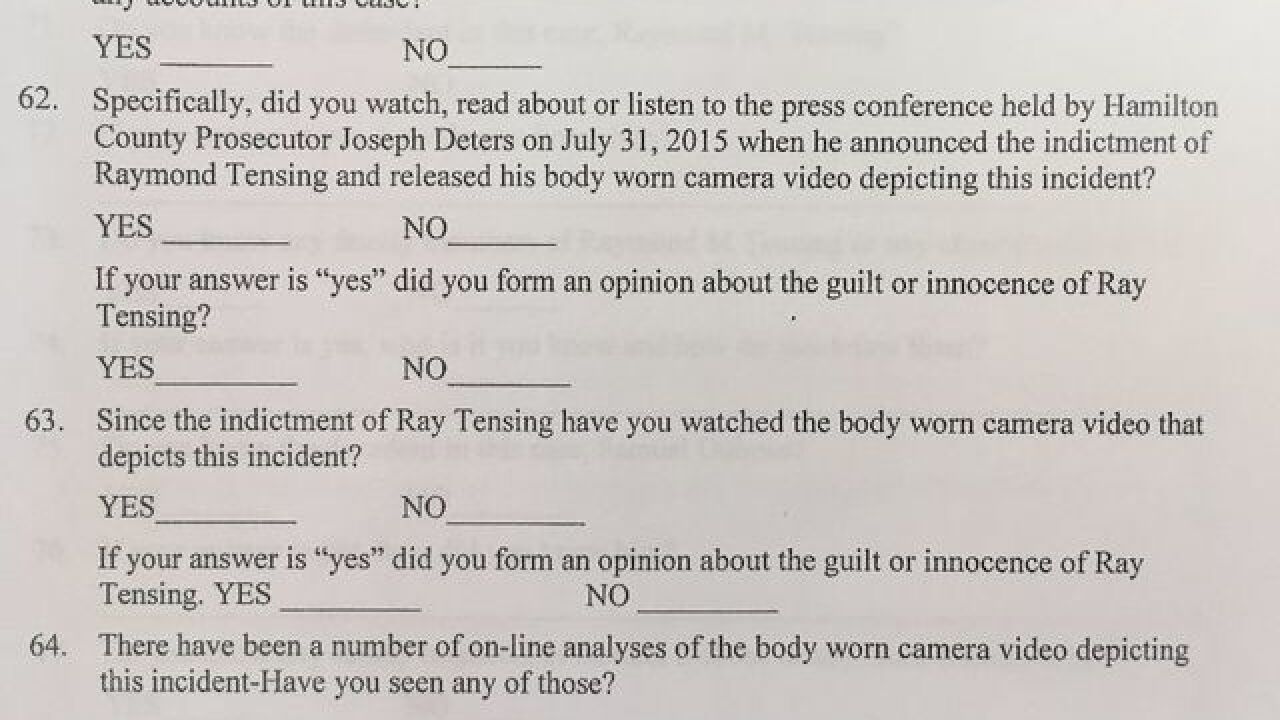 Tom McKee | WCPO
<p>Some of the questions from a 25-page questionnaire given to potential jurors in Ray Tensing's murder trial.</p> 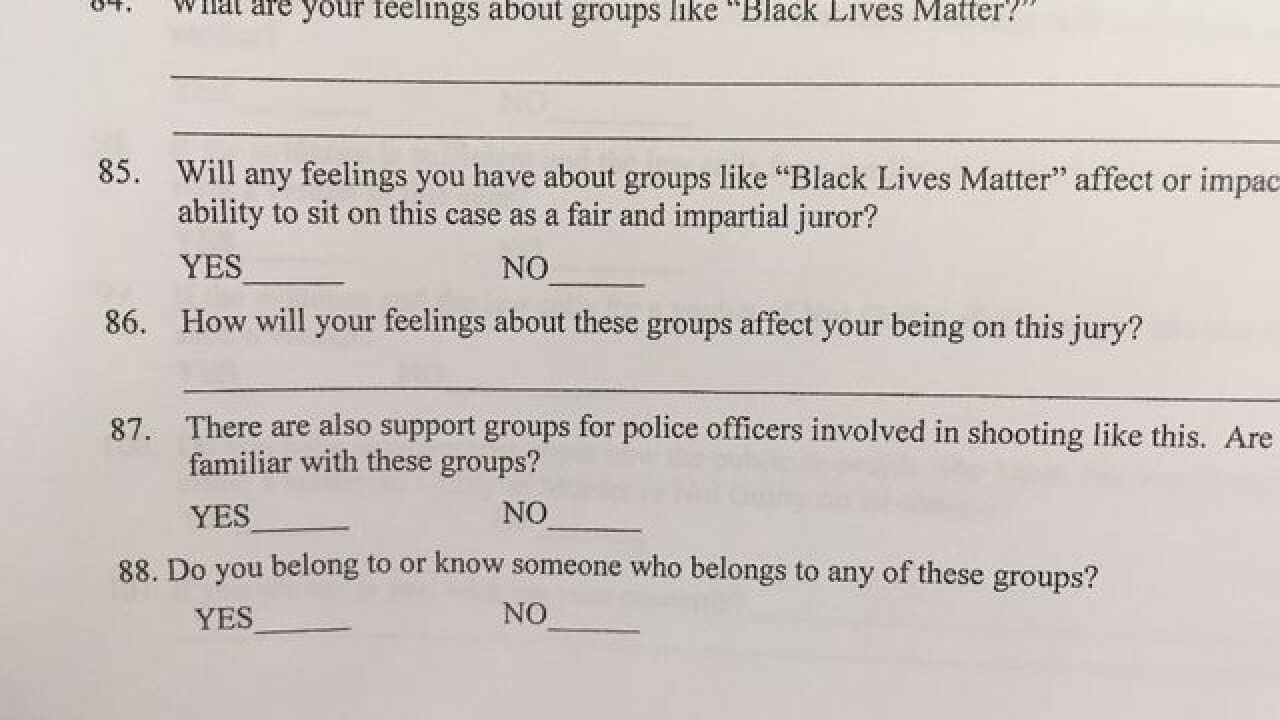 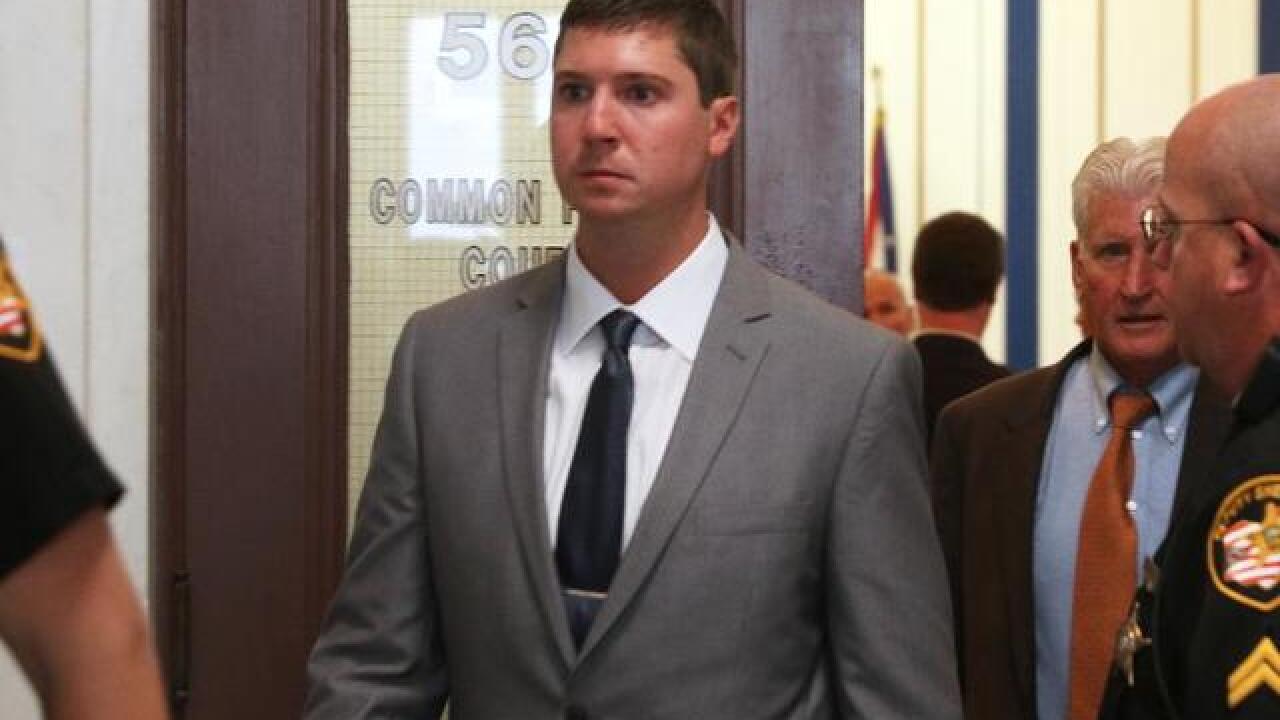 Those questions are included in a 25-page questionnaire given to 234 people who are part of the initial jury pool , aimed at helping defense attorneys and prosecutors find a fair, impartial jury. Lawyers for both sides will whittle down who they'd like on the 12-member jury before actual questioning begins next Monday in Judge Megan Shanahan's courtroom.

GALLERY: Inside the courtroom on Day 1

TIMELINE: History of the case

Tensing faces charges of murder and voluntary manslaughter for the shooting of Samuel DuBose during a traffic stop on July 19, 2015. His defense attorney has said Tensing feared for his life and that DuBose dragged him with his car.

Some of the questions jurors were asked Tuesday:

This case has received a lot of pretrial publicity. Have you watched, read or listened to any accounts of this case?

Specifically, did you watch, read about or listen to the press conference held by Hamilton County Prosecutor Joseph Deters on July 31, 2015 (sic) when he announced the indictment of Raymond Tensing and released his body worn camera video depicting this incident?

If your answer is "yes" did you form an opinion about the guilt or innocence of Ray Tensing?

What are your feelings about groups like "Black Lives Matter?"

There are also support groups for police officers involved in shooting like this. Are you familiar with these groups?

The document also included questions about the potential jurors' feelings about university police departments, use of force and the civil settlement between the DuBose family and UC.

"These questions are not designed to pry into your personal affairs," Shanahan said, "but to discover if you have any knowledge of this case or any preconceived opinion that you cannot set aside or if you’ve had any experience in your personal or family life that might cause you to favor either party.

"These questions are necessary to ensure each party a fair and impartial jury."

MUST READ: 20 things you need to know about the case

Attorneys will review the questionnaires and begin actual questioning next week to seat a jury.

Local defense attorney Marty Pinales said the defense and prosecution will likely push for different demographics during the selection process, but both sides will work to ensure the impartiality of the 12 people chosen.

“(The court) will probably be using some experts, some psychologists and jury consultants that will look in and look behind the answers,” Pinales said.

Eyes from all over the country will be on the proceedings. Local protest groups like Black Lives Matter and the Amos Project are determined to make their voices heard -- and to hold the court accountable.

Tensing appeared in court Tuesday and will return Wednesday, as Shanahan hears new motions in the case filed Tuesday. That's expected to take about a half-hour and will begin at 12:30 p.m.

Read the full questionnaire below:

Juror questionnaire by James on Scribd

For complete coverage of this case, go to wcpo.com/TensingTrial .