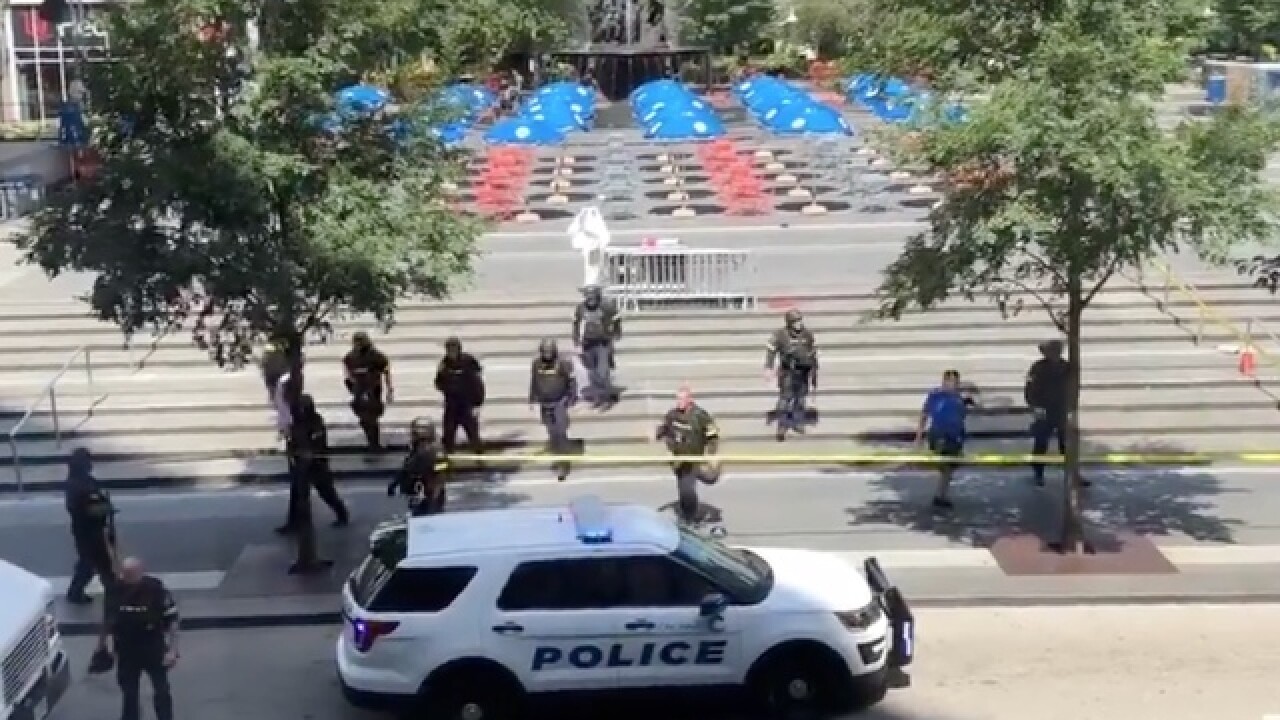 Copyright 2018 Scripps Media, Inc. All rights reserved. This material may not be published, broadcast, rewritten, or redistributed.
WCPO
<p>Members of SWAT on Fountain Square -- Sept. 6, 2018</p>

CINCINNATI -- State and local leaders reacted to Thursday’s deadly shooting on Fountain Square with condolences for the victims’ families. Many of them thanked police and first responders for their actions at the scene, in and outside Fifth Third Center.

Below are the written statements released following the Fountain Square shooting:

There was a senseless act of gun violence on the streets of Cincinnati this morning. I’ve spoken with the Mayor and informed him the state will provide any necessary resources to the local police. 1/

I commend the law enforcement, fire and EMS personnel who swiftly responded to the scene and share my deepest sympathies with the innocent victims of this violent attack. 2/

“Jane and I are heartbroken about today’s shooting in our hometown of Cincinnati. This is a tragic day for our city and our state. While we are still learning about what happened and why, we thank all of our police officers and first responders for their bravery today, and for taking quick action to stop the suspect and provide medical care for those at the scene. We are praying for the victims, their families, and all those who’ve been impacted by today’s tragedy.”

Rich Cordray, Democratic candidate for governor:
“Senseless gun violence has touched yet another community in our country, this time in Cincinnati. My heart goes out to the victims of this tragedy, and to all those who have been affected.

“But, our words are not enough, and we cannot become numb to horrific incidents like this that we see around our country with frightening regularity. We must take concrete steps to stop tragedies like this from happening again, and to end the gun violence that plagues our country on a daily basis. And, we must finally have leaders in Washington — and in state capitols — who will step up and take the action that we so desperately need to keep our schools, churches, and communities safe.

“Our deepest gratitude also goes to our safety forces and first responders who bravely rushed to the scene and risked their lives to protect innocent bystanders. They can never be thanked enough for the work that they do.”

Tragic situation in #Cincinnati today. I’m monitoring reports on this developing incident, and #OhioBCI is on scene right now assisting local authorities. I am grateful for the fast action of @CincyPD and other first responders who responded to the scene to help.

“Tragedy struck our beloved Cincinnati today with a senseless act of gun violence. I was less than a block away from the shooting this morning on Fountain Square. Our hearts ache for the victims and their families. Our gratitude is with the first responders who reacted so bravely to keep us safe. This kind of tragedy occurs far too often in our country. May it never occur again.”

I am praying for all those involved in the shooting on Fountain Square. My staff and I are closely monitoring the situation as it develops. For now, those in the downtown area should continue to listen to our brave first responders and follow @CincyPD for updates.

My prayers are with the victims, their families, and with those affected by this senseless act of violence. I am grateful for the courage and swift actions of our first responders. Our community is shaken, and we must resolve to support each other in the days and weeks to come.

Cincinnati organizations also sent messages of support to the victims and the victims’ families:

“The thoughts and prayers of our entire organization go out to the victims of today’s tragedy, as well as their families and friends. We also thank the first responders of our great city, who put themselves in harm’s way each and every day for the safety of all. At tonight’s game, prior to the singing of our National Anthem, the team and our fans will come together and hold a Moment of Silence in honor of the victims.”

We send our deepest wishes for peace and recovery to those affected by today's shooting downtown.

To our knowledge, our staff and their families in the area are all safe and we wish the best to those who are affected.

“The active shooter situation this morning in downtown Cincinnati is yet another reminder of the impact that violence has on us all. The fact that this event happened only two blocks from my office makes the shock of all such shootings even more real. Please join me in praying for the victims and their families as they deal with this tragedy.”

“Amidst the moral tragedy of gun violence, we remember and pray for those who have died or were injured during this morning's tragic events at the 5/3 Bank on Fountain Square. We also remember those who were first to respond and continue to provide critical care and safety for all involved.”