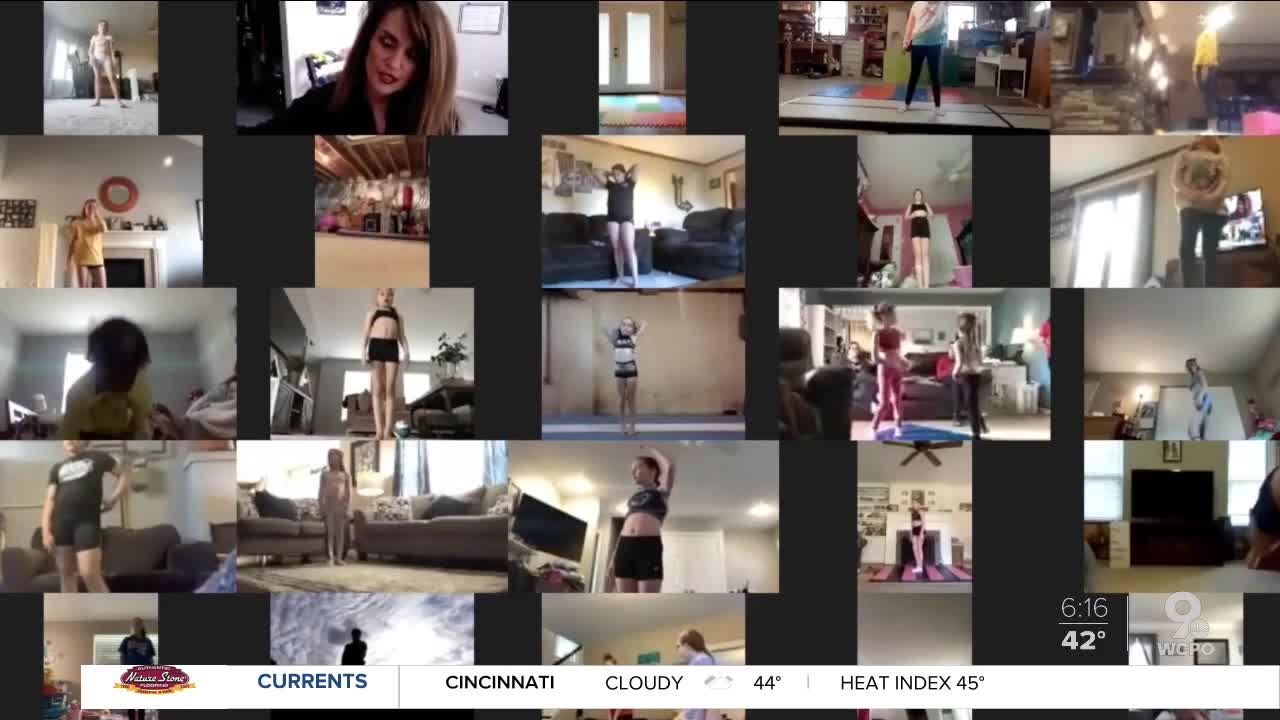 2020 was the year 9-year-old Adalynn Greer was going to go to the Cheerleading National Championship for her first time. Since then, the gym where she practices, Midwest Cheer Elite, has shifted its lessons to virtual lessons, after temporarily closing its doors for COVID-19.

WEST CHESTER, Ohio — This was the year 9-year-old Adalynn Greer was going to go to the Cheerleading National Championship for the first time. The event, which was scheduled to take place at the Walt Disney World Resort in Orlando, was canceled due to COVID-19.

Since then, Midwest Cheer Elite, where she practices, has moved its lessons online after temporarily closing its doors. Now, the coaches instruct Greer and more than 500 athletes a week via Zoom.

“It’s hard, but it’s also good at home so we can be able to practice,” Greer said via the same video conferencing app she uses to interact with other athletes and her coaches. “I need to make sure I do the Zoom classes so I can stay in my condition so I don’t have to do extra practice when I get back up and running at the gym.”

For 12 hours a day, every day of the week, you can find owner Tanya Roesel or the other 25 coaches on Zoom, virtually instructing the athletes in a group or one-on-one setting. In the group lessons, Roesel can teach about 85 kids in one 30-minute class.

“When we start I leave the [microphones] all open, which is crazy when you have 85 people in the background,” Roesel said. “So I’m like, ‘Hey, you have 2 minutes to talk to everybody.’”

The 30-minute lessons involve 25 minutes of jump drills and conditioning, with five minutes to catch up. She knows the importance of letting the athletes connect during this time.

“As an adult, I have a hard time with it,” Roesel said. “I can’t imagine at 8, 10, 12 years old what it’s like from going to play outside with your friends and neighbors to not leaving the walls of your house.”

In order to make that transition easier, Roesel also calls the athletes and their families to check in on them.

“As we got into contacting more, as each day and week went by, we started to realize these kids are just not OK,” she said. “Now, the whole focus has been not preparing for nationals anymore because it’s all canceled. Now, it’s basically how can we keep the mental health of these kids in check so when we get through the other side of this storm we don’t have secondary consequences, which is the mental health of these kids.”

To keep the athletes distracted, Roesel also decided to encourage some friendly competition by providing free pizza to whoever has the best jumps during Zoom practice.

“I think people always think that sports is all about the talent or the skill that you’re learning, but in cheer it’s not just about training the kids, it’s about teaching them to get along with other people that may not be from the same background,” Roesel said. “Teamwork, camaraderie.”

Roesel adds that she has received several calls from concerned parents saying their children are going through a tough time now that they don’t have school and cheer to turn to.

Adalynn’s mother, Melissa Greer, sees her daughter’s demeanor improve each time she gets on the interactive lessons.

“You can always hear her saying hi to everybody,” Melissa said. “It’s cute because she always rushes me out of the room. It’s like her 30 minutes of peace and away from the family. It’s her escape from what’s going on currently.”

Adalynn Greer agrees. Her mat and these lessons are her escape from the difficulty of this time.

“Normally cheer is like my life and school and home,” she said. “Cheer takes up half of my social life, so when I get up in the morning on a normal day I would normally have cheer right after school, but I still look forward to seeing my friends on the Zoom call.”