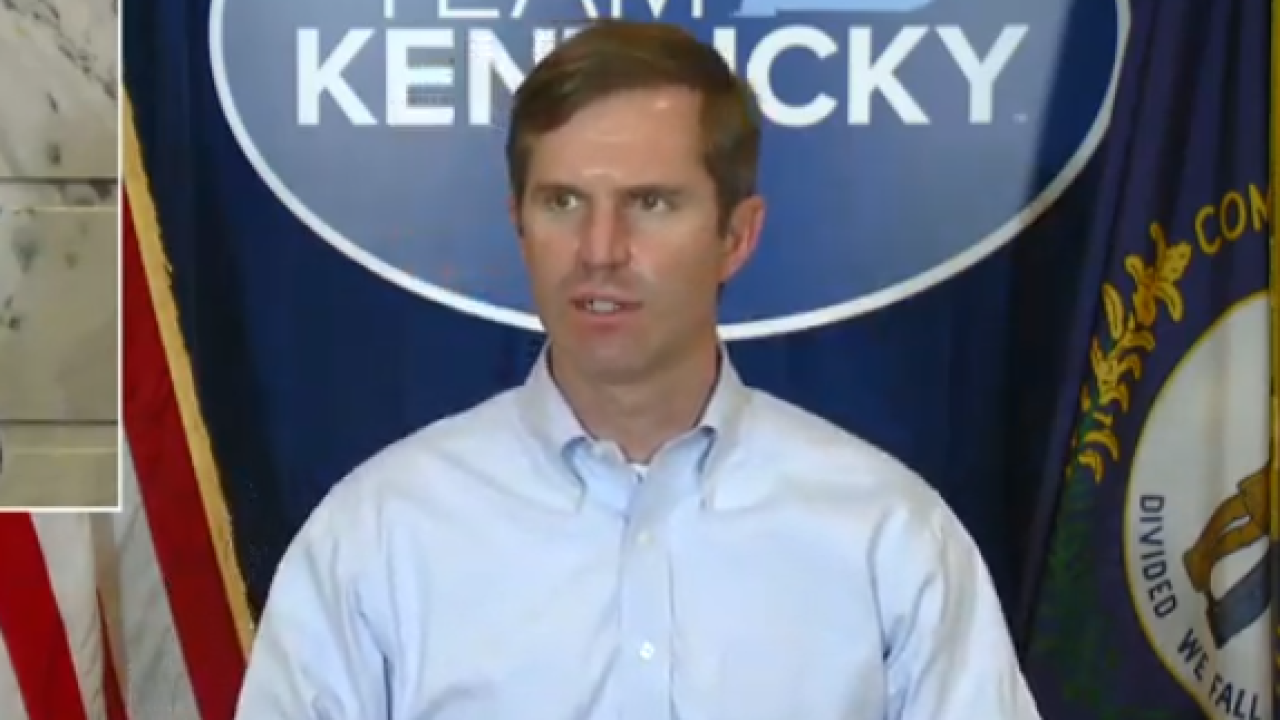 FRANKFORT, Ky. — Given the latest escalation in the number of new coronavirus cases, Gov. Andy Beshear said he would re-up Kentucky's mandate on wearing face coverings in public for an additional 30 days.

“We saw with the last escalation that we have the power to stop it if we simply do what we know works, and that is wearing a mask, engaging in social distancing -- and if we’re honest with ourselves, we know that fewer people are wearing masks right now than we were in July, when we took the steps on the mask mandate to stop the escalation,” the governor said.

On Tuesday, Beshear reported 1,054 new cases of COVID-19, including 144 cases in children under 18, as well as four new virus-related deaths.

While Kentucky's coronavirus mortality rate (1.7%) sits lower than the national average (2.8%), Beshear called the rise in cases concerning due to the projected number of deaths that follow increases in new cases.

Public Health Commissioner Dr. Steven Stack explained the importance of wearing masks, especially to protect older Kentuckians and those with medical conditions who are more vulnerable to complications and death caused by coronavirus.

“Until we find a way to protect all those people from the actions of others, we have to take steps to give everyone a fair shake so that they don’t get unwillingly taken down by this when we could have taken steps,” Stack said.

In light of President Donald Trump’s decision to instruct aides to halt negotiations for a second stimulus package until after the November election, Beshear called on Congress to pass new federal relief for Americans during the pandemic.

“This is their job, and basically it’s saying, ‘We’re not gonna do our job because of politics, because of an election coming up.’ It’s your job in a pandemic to put aside the politics and to sit down and to stop being Democrats and Republicans and to get something done,” the governor said.

After Kentucky broke its record for the highest weekly number of cases last week with 6,126 cases, Beshear said capacity limits could be reinstated for Kentucky businesses if the trend isn't reversed in the coming weeks.

“In seeing our escalation, if we can’t stop here in the next couple weeks ... then the White House is going to recommend changes in capacity for various businesses, and we’re going to have to take a very serious look at it," the governor said.

Kentucky has seen at least 74,194 total cases of COVID-19 and 1,218 total deaths, and Kentucky's coronavirus positivity rate dipped slightly 4.29%, mainly due to a ramp-up of testing. So far, more than 12,751 people who had the virus have reportedly recovered from COVID-19, and the state has now administered more than 1.5 million coronavirus tests since the pandemic began.

NKY Health reported that 4,832 people across Boone, Kenton, Campbell and Grant counties have tested positive for COVID-19, and 96 people have reportedly died of the virus. The health department reports 820 active cases and 3,916 people who have recovered from coronavirus as of Tuesday.

Several Northern Kentucky counties, including Boone, Campbell, Grant and Kenton counties, continue to show positivity rates between 5% and 10%, according to the latest White House report on Tuesday.

Those counties are in the White House's "yellow" zone, a step below an orange zone indicating a wider spread of cases and two steps below a "red" zone denoting a 10% or greater positivity rate.

Kentucky Labor Cabinet General Counsel Amy Cubbage announced the state has made its initial batch of federal Lost Wages Assistance payments for all six weeks to those who already certified as unemployed. That totals about $245 million paid out through FEMA and Kentucky CARES Act funds. Last week’s payments were processed Monday night and should hit accounts soon, Cubbage said.

Cubbage said roughly 7,000 Lost Wages Assistance claimants had been overpaid, and that those who were overpaid will receive notice and must pay that amount back. The error did not slow payments to other claimants, she said.

Cubbage advised those who did not receive an additional $400 in FEMA Lost Wage Assistance, look out for a denial letter in the mail in order to appeal that denial. For more information, see the FAQ sheet at kcc.ky.gov.

The site is open Monday through Friday from 8 a.m. to 2:30 p.m. You will be able to collect your own sample without leaving your vehicle and receive results within three to five days.

Additionally, appointment-only drive-up testing is available through St. E at 7200 Alexandria Pike, Alexandria. The free testing site is open on Tuesdays and Thursdays from 5 p.m. to 9 p.m.

Schedule an appointment at those sites online at www.stelizabeth.com/covid-testing. To find all coronavirus testing locations near you, click here.

Watch a replay of the briefing in the player below.