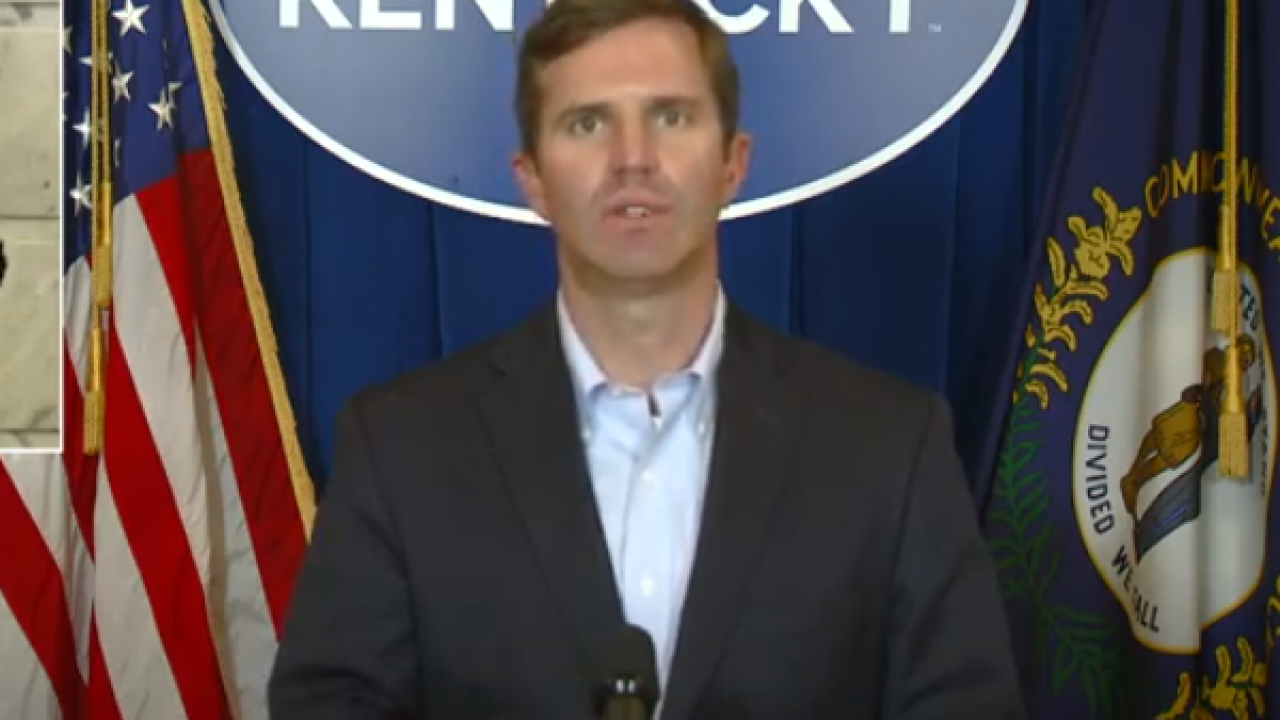 Copyright 2020 Scripps Media, Inc. All rights reserved. This material may not be published, broadcast, rewritten, or redistributed.
Gov. Andy Beshear at a coronavirus update in Frankfort, July 29, 2020.

Kentucky has administered 609,989 COVID-19 tests so far, and 7,470 people have recovered from the virus. To find a coronavirus testing location near you, click here.

“We’re maybe weeks at most behind these devastating impacts we've seen in other places, but we've acted a whole lot earlier than they have,” Beshear said. “The more people who jump on board who help us out with these steps, the better off we will be moving forward.”

Those preventative orders include a statewide mask mandate, a 10-person limit on social gatherings and a two-week shutdown for all bars. Restaurants, which health officials believe are connected to 17% of infection clusters, have been ordered to reduce indoor dining capacity to 25% and maximize outdoor seating when possible.

The governor announced a travel advisory earlier this month, asking Kentuckians to avoid traveling to states with high COVID-19 positivity rates, and if they do travel to hard-hit areas to quarantine for two weeks.

Beshear also reported a recent data breach in the state employment office affected one or two people “at most” and did not include the release of any identifying information. The breach included employer information and one line about an individual’s health, but Beshear said the breach did not include any specific credit or financial information, and the office expects the impact of the breach to be low to the affected individuals.

“Absolutely no one to our knowledge has been financially harmed whatsoever,” Beshear said Wednesday.

A wider “potential vulnerability” hit Kentucky’s unemployment system in April. Those affected by the breach were notified by mail, and the breach was reported to the public in late May.

Additionally, NKY Health reported that 2,502 people in Boone, Campbell, Kenton and Grant counties have tested positive for coronavirus since March, and 80 people have died of the virus. As of Wednesday, 1,713 people have recovered from the virus.

In 248 of Kentucky's long-term care facilities, 2,430 residents and 1,334 staff have tested positive for the virus, and 473 residents and four staff members have reportedly died of the virus as of Wednesday.