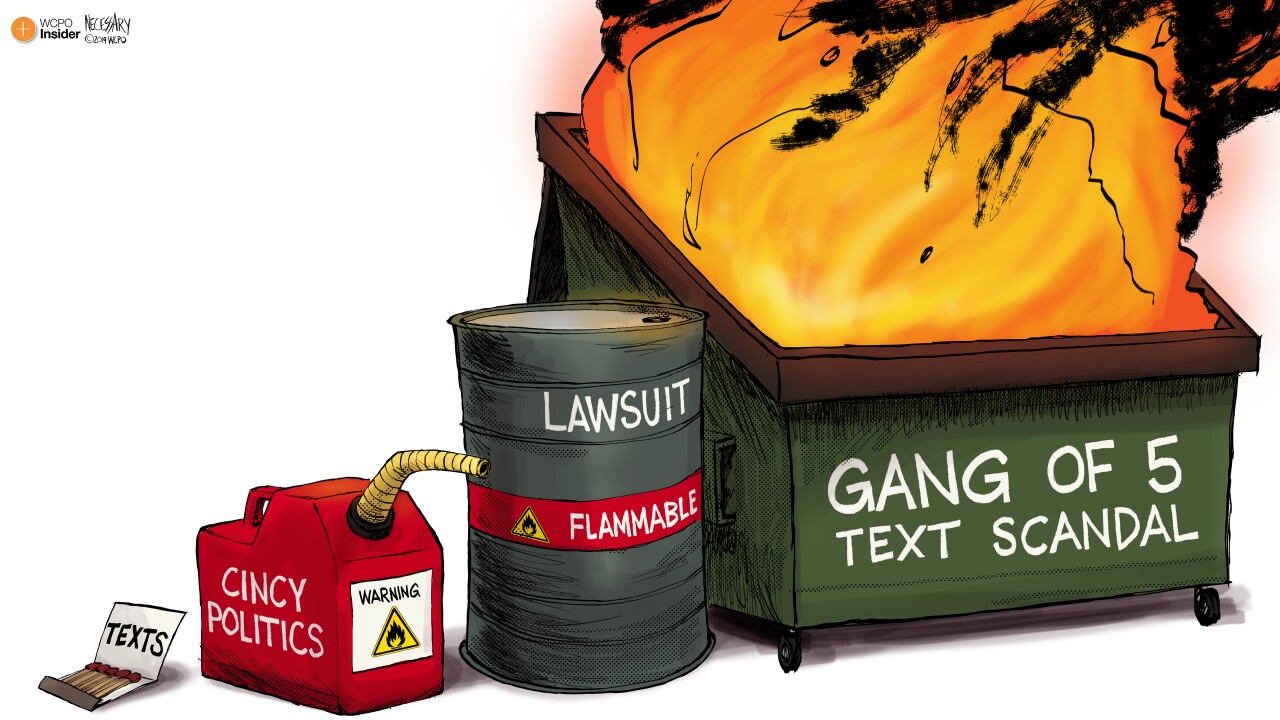 About a year ago, I drew a cartoon dumpster fire with the caption: Live view from City Hall.

That particular fire was about the feud between Cincinnati Mayor John Cranley and then-City Manager Harry Black. That fire is still burning, but it's gained fuel and morphed into the blazing inferno that is the so-called "Gang of Five" text scandal.

To sum it up as briefly as possible, five city council members started texting each other about the Cranley-Black fight and other city business. The texts occasionally read like the "Mean Girls" Burn Book, with particularly nasty jabs at Cranley.

Mark Miller, treasurer of Coalition Opposed to Additional Spending and Taxes (COAST), sued the council members, saying they were violating the law by using these texts to hold meetings in private. Over $100,000 in taxpayer money was spent on a defense fund for the council members.

On Tuesday, Judge Robert Ruehlman settled the case and said the council members should resign. Council members have issued mea culpas, and the texts are now available for the public to read, if you've got the time to do so. Somewhere in there are deleted texts, a phone in a pool and accusations of a cover up.

Whew. And that's the short version.

The council members broke the law. It was boneheaded of them to do so because it's such a small thing that could have been easily avoided. They should have known better than this. Do I think that it's a resignable offense? No.

They've shown themselves to be petty and they've probably done a lot of lasting to their own political careers. (How's that mayoral bid looking now, P.G.?) They should have come clean early on, apologized, took their licks and moved on.

Had they taken care of this early and been transparent, it would have been a slight burn on them and the city. Now, it's a three-alarm fire.

Of course, they're not the only ones who set the fire. The five council members are Democrats. If you think that Miller, treasurer of the quite-conservative COAST, filed this lawsuit strictly out of a sense of civic duty, well, I've got a nice bridge in Brooklyn to sell you. This was about politics and scores to settle, and the lawsuit was just fuel for the fire.

As derogatory as those Gang of Five texts were towards Mayor Cranley and others, if you don't think that similar sentiments have been uttered about the five council members, well, I've got another nice bridge in Brooklyn to sell to you, too.

Cincinnati politics are toxic. Inflammatory. Hell, all American politics are at the moment. But we, as citizens, should demand better, or else we'll continue to get burned.