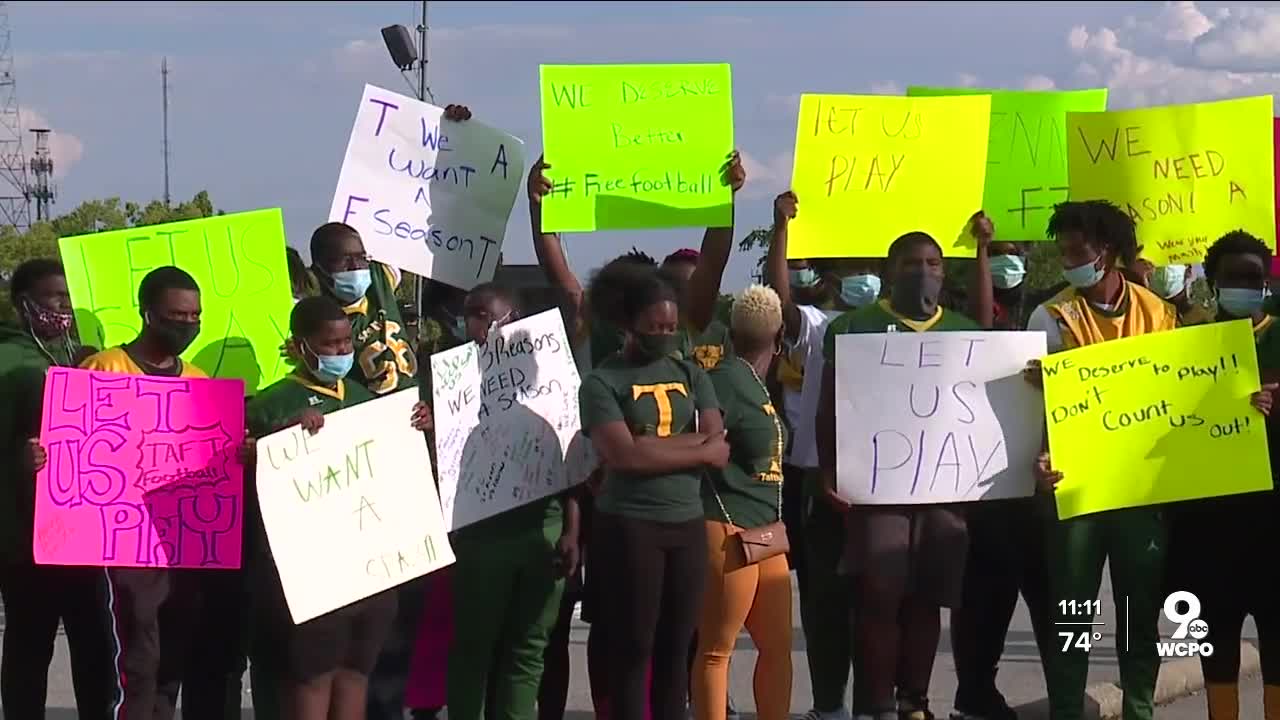 CINCINNATI — As any other school year starts up, student-athletes would be practicing and gearing up for their season. Instead, in 2020, several teams said it was more important to be at Monday’s Cincinnati Public Schools Board of Education meeting. Dozens gathered outside CPS headquarters during the meeting, held virtually, on Monday night.

That's because at the board's last meeting, leaders said school sports would be paused during the five-week remote-learning period. Students will still be able to practice, but the current plan recommends not moving forward with new phases.

On Monday, Superintendent Laura Mitchell said the district had already had nine confirmed cases of students who have COVID-19 and were practicing sports. Those students have since been quarantined.

Student-athletes like Walnut Hills High School soccer player Isaiah Jackson know this kind of school year, set in the middle of a pandemic, doesn’t come with a playbook.

“They need these seasons to have a future, to potentially get into college and succeed in life,” he said.

He's hoping for a senior season to make a play for college game time.

“Having the season allows us to gather highlights, do what we can to gather the little exposure we need to potentially get an offer to play in college,” Jackson said.

“We feel that it’s worth it,” she said. “They’re strong. They’re young, they’re healthy, they’ll be okay. We want the board to give us that choice as parents.”

She said with other schools starting up their sports programs, she worries CPS athletes will miss out.

“We want to be a part of that," she said. "We don’t want our kids to be at a disadvantage for not being able to play.”

Cincinnati Public Schools will start back Monday, Aug. 24, with an online plan. The school system has provided thousands of iPads to students and will help families connect to free WiFi internet in order to participate in remote instruction.

For blended learning, which may resume Sept. 28 if certain COVID-19 conditions are met, CPS students in Cincinnati Public Schools will be divided into two groups, each of which will attend in-person classes for two days every week (either Monday-Tuesday or Thursday-Friday) and on alternating Wednesdays. The remainder of the week’s lessons will take place online.

District officials believe the two-group system will allow social distancing during in-person classes and prevent cross-contamination from one class to the next, according to superintendent Laura Mitchell.

Under the plan, CPS officials will review community health data during the week of Sept. 14, poring over Cincinnati case numbers, the city's positivity rate and Hamilton County's status on the Ohio Public Health Advisory System.

By Sept. 28, students could resume a blended in-person learning plan, if CPS officials determine it's safe to return. For that to happen, Cincinnati would have to see a "sustained daily decline" in new COVID-19 cases over a two-week period and a positivity rate equal to or under 5%, and Hamilton County must be out of the "red" or "purple" alert zones on the state's health advisory system, according to the proposal.

Under the plan, students with disabilities and English learners will still receive services in the remote environment and may have materials that don’t involve technology, based on individual student needs. Some students may require alternative communication devices, which will be sent home with them. Most are included in general education classrooms and will participate with other students.

Additionally, all students in grades 2-12 would receive laptops, while pre-K students, kindergartners and first-graders will be issued iPads. The district has already distributed roughly 11,000 iPads to students. CPS, in partnership with Cincinnati Bell, will also offer free WiFi internet “to every CPS student who needs it” by the end of this week.

When they come back to school buildings, CPS will require students and staff to wear masks on buses, in hallways and in classrooms. CPS will also conduct temperature checks, enforce six feet of social distancing and require hand washing before meals. Custodians will also deep-clean classrooms and school spaces.

Food hubs will remain at schools during distance learning to retrieve a week’s worth of meals.

For more information on CPS plans to reopen, click here.