What will replace the empty Imax at Newport on the Levee? 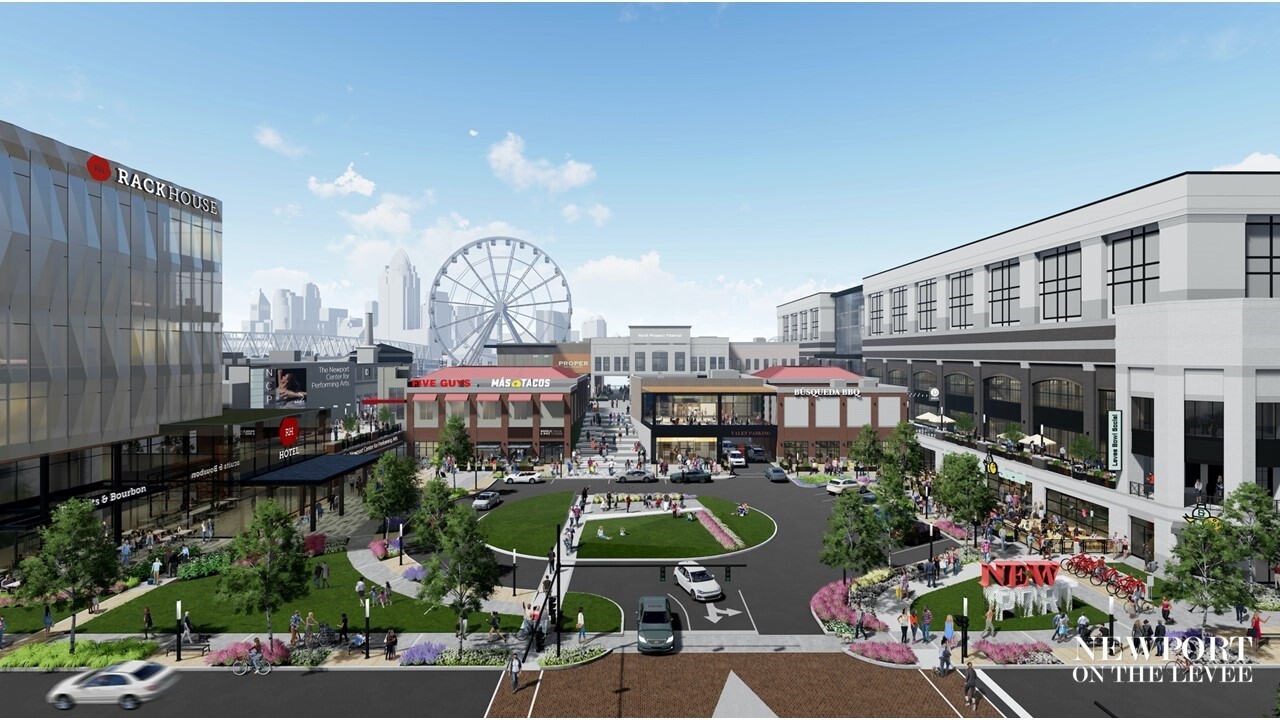 CINCINNATI — Newport on the Levee could get a grand new entrance at the end of Monmouth Street along with a hotel and performance venue in the long-dormant Imax theater space, based on a rendering submitted recently to the city of Newport by North American Properties.

“They’re go-getters,” said Newport City Manager Tom Fromme. “I have no doubt that you’ll see significant progress being made within a year.”

In a prepared statement, North American Properties Chief Investment Officer Tim Perry said the images it has released so far should be considered "artistic representations of our vision for Newport's front door." In other words, they shouldn't be taken too literally.

Fromme said the image of the project from Third Street is the most recent rendering submitted to the city. North American acquired the Newport on the Levee last year and announced it would invest at least $100 million on its renovation. The company has shared some details on how the renovated project would look from the north and facing northeast. But this is the first look at how the property could change on its southwestern corner.

The rendering shows a six-story hotel property on what is now a vacant lot used for ice skating. A “Newport Center for the Performing Arts” is depicted where the Imax theater operated before its 2003 closure. Fromme said neither of those additions are set in stone, but he’s certain North American wants to “open that whole area up” as part of the Levee’s redevelopment.

“I have no doubt they have aspirations to fill those gaps in,” he said. “They don’t want a vacant lot sitting there.”

The rendering shows a new vehicle and pedestrian entrance where Brio Tuscan Grille now sits. Fromme said North American wants to relocate Brio and demolish the freestanding restaurant property to make way for “a grander entrance” at Third and Monmouth.

“Brio is like a wall,” Fromme said. “When you go north on Monmouth Street towards Cincinnati, you pretty much dead end into the back end of Brio. You have to circle around to get into the valet circle.”

Fromme said the change would allow cars to enter the parking garage from Third Street. Currently the main garage entrance is at the intersection of Washington Aven ue and Dave Cowens Drive on the property’s northeastern corner.

Brio Manager Carl Axelson confirmed his company is negotiating with North American about relocating but it wants to stay at the Levee.

“Our president has come here to meet with them,” Axelson said. “We’re definitely not going anywhere. We’ve got six more years on our lease.”

Perry said North American has talked to several tenants about relocating within the Levee and it has "commenced talks with potential hotel partners." He also said the company has "no active talks or negotiations regarding a potential performing arts venue at the Levee."

Conceptual designs released in June show how the Levee plans to replace those spaces with an interior design that takes better advantage of the building’s river view. North American has also said it plans to announce several new restaurant concepts for the property.