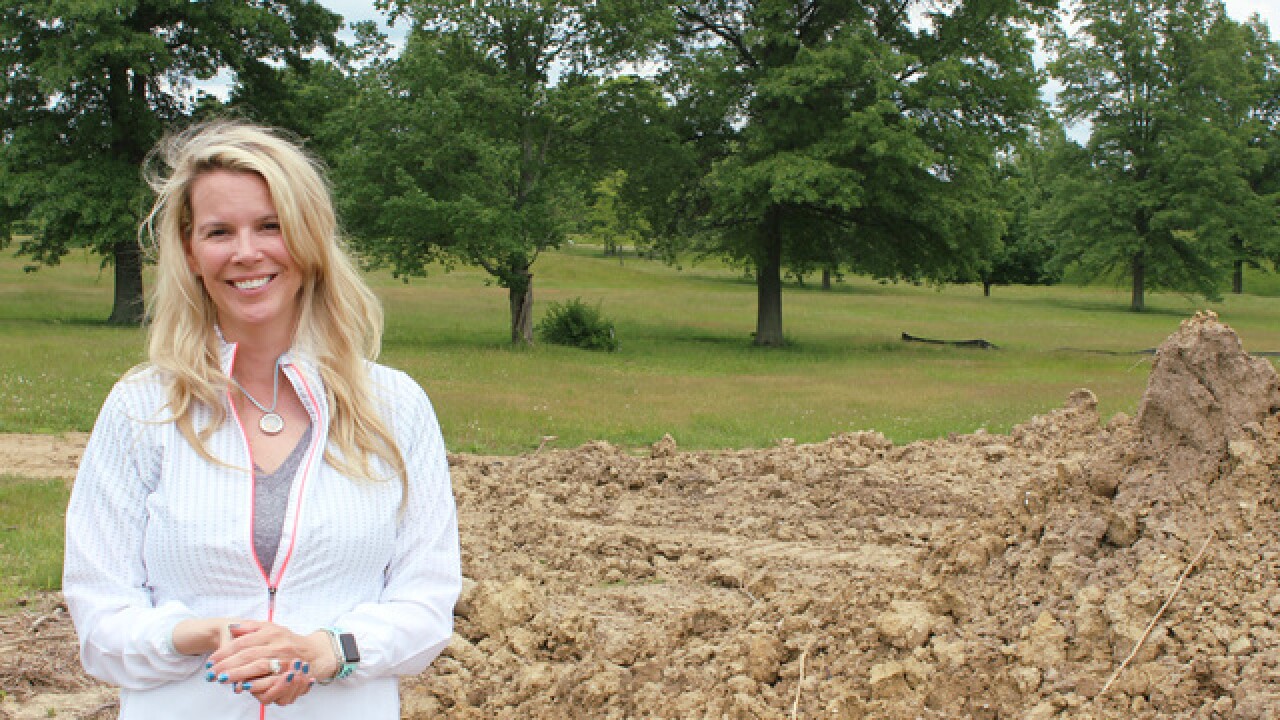 Copyright 2017 Scripps Media, Inc. All rights reserved. This material may not be published, broadcast, rewritten, or redistributed.
<p>Lelle Lutts, of Deerfield Township, stands at the site of the former Kingswood Golf Course. Township officials hope to develop the land, but Lutts is a leader of opponents to the plan. They say the area already is overbuilt and that the 110 acres would be used better as green space. (Greg Paeth for WCPO)</p>

DEERFIELD TOWNSHIP, Ohio -- It's been roughly nine years since anyone has played a round at the former Kingswood Golf Course in Deerfield Township, where the 100-acre golf course site hugs the west side of I-71 immediately north of Irwin Simpson Road.

The ongoing debate about the future of the property, owned by the township since 2006, could have an impact on what kind of development occurs on this tract as well as on nearby land in a township that's part of rapidly growing Warren County.

The debate also could help determine who gets elected in November, when voters will go to the polls to select three township trustees and the township's fiscal officer. At least one candidate has embraced the Kingswood development issue.

The township has taken three major steps toward developing the property.

The badly deteriorating Kingswood golf course clubhouse was demolished, and Warren County, with the blessing of Deerfield Township, began work early this year on a five-lane extension of Innovation Way – a big looping "L" from Duke Boulevard to Socialville Foster Road. The new stretch of road is a little less than a mile long and budgeted at about $4.2 million, according to Betty Hull, a spokeswoman for the project. It is scheduled for completion by the end of the year.

The new Innovation Way will connect directly to a revamped interchange at Western Row Road and I-71 , township documents show.

The third step may be the most significant: Selecting a master developer that would oversee everything that's built on the tract. Earlier in the year, four development firms were candidates for master developer status after they responded to the township's Request for Qualifications from companies that hope to develop the property. Three firms remain in the running after Flaherty & Collins Properties of Indianapolis decided not to pursue the project.

The township's original timeline called for the developer to be selected in April. That self-imposed deadline slipped past, and two key township officials say they don't know when a developer will be chosen. Construction on the project is supposed to begin no later than the spring of next year.

Calls for green space, not retail

As might be expected, the plan to develop the property doesn't have universal support. Some people who live near the site contend that the 100-acre former golf course property and an adjacent 10-acre tract – purchased by the township for about $10 million – should continue to be used as a green space and a "passive park" for walking, running, exercising the dog or riding a bike.

The loosely organized effort to oppose development on the site – fueled by a Keep Kingswood Park Facebook page and website – has at least one supporter who won't be passive for long. Jim Siciliano, 38, a history and government teacher at Milford High School, said he intends to run for township trustee in November.

"I've been talking about it (the electoral process in the classroom) for years, so I thought I'd might as well jump in and do it," said Siciliano, who has lived in the township since his parents moved there when he was about 15.

Siciliano's position on the golf course property is no secret. He announced his candidacy late last month on the Kingswood Park Facebook page.

"To me, there are a couple of important things that attract families to an area. One is great schools, which we have in Warren County. The other is great parks, where families can get outside and have fun together," said Siciliano, who has three children.

Although she's not running for office, Lelle Lutts isn't passive about the issue, either. She has emerged as the most vocal supporter of retaining the 110 acres as green space and resisting additional commercial development. Lutts is convinced that the commercial boom in the county has already created a retail glut that's substantiated by vacant storefronts not far from the golf course site.

She's not alone with that assessment.

"I don't think more retail is necessary," said Kristin Malhotra, a township resident that opposes development of the property. She said she could support a pro-park candidate.

"Along Mason-Montgomery Road there are a lot of empty stores," she said. "If they're going to add more retail, there has to be a need for it. They shouldn't take away this beautiful green space for a bunch of empty shops."

Lutts is aware that some township officials believe the fate of the former golf course has become an obsession for her.

"If they say that I'm obsessed with saving the green space and the environment and being concerned about my children's future, then I'm guilty," said Lutts, a runner who lives a short distance from the Kingswood property and visits it frequently.

In addition to her concerns about how the property will be used, Lutts made it clear that she is highly skeptical about the process that has been employed to make these far-reaching decisions. "We have had to pound them over the head to even get an answer to questions about the park."

Lutts said the trustees seem reluctant to respond to any questions about the property. "Chris (Trustee Chris Romano) wants to do everything backward. He wants to wait until they have chosen a master developer and then that master developer will be in a meeting where they would answer questions, and that's not what we want.

"We want (the trustees) to stop the process and actually have a Q and A with your constituents. Maybe then you can convince us all that you have to develop that park – that we're so far in debt that we have to develop it."

Lutts created and is president of the Save Kingswood Park limited liability company, which was established in February and has raised some money – she wouldn't say how much – to get some help from Fair Shake Environmental Legal Services , a law firm headquartered in Pittsburgh that has an office in Akron.

The Warren County trustees and township administrator see things far differently. They stress that, when the county acquired the property about 11 years ago, the intention was to hold on to the land until it could be developed, not because the township wanted to create a new park.

"There is a group of people who are in favor of nothing taking place on the property, and there are also those who are strongly in favor of the exact opposite," said township administrator Eric Reiners, "and there is a portion of the community that looks at it as having the potential for new development that could be something different and unique, something we don't have here in the community right now.

"Again, this has been essentially in the works since 2006. It's not a new concept.... It has been a work in progress, and the timing is now right from the standpoint that different improvements are taking place in the area (with) the roadway improvement … (and) what it means to opening the property up (for development)," Reiners said.

Reiners and Trustee Dan Corey also pointed out that prospective developers have been asked to come up with a plan that will set aside about 30 percent of the 110 acres for "civic uses." Reiners and Corey both acknowledge that they don't yet know what those "civic uses" might be.

Lutts said she's been frustrated when she asks questions about the project and all she gets in response is "crickets" -- total silence from the trustees.

Corey acknowledged that many questions haven't been answered because it's early in the process, and township officials don't have all of the information they need. He said he believes some of the opponents are convinced that the trustees could answer some of the questions but have decided instead to withhold information.

"That theory is not true, and they don't trust us," Corey said. "The only other thing that I would add is that we are using an open and transparent process that provides an opportunity for the public to be engaged in the process. We don't know all of the answers because the process (that is being used) will help determine the answers to the questions."

Corey said the township had a number of opportunities to sell the land outright to a developer through a procedure that would have excluded any public comment.

The township intends to select a master developer at an open meeting and then hold a public hearing to gather ideas from the public about how the property should be used, said Corey, who will run in November for township fiscal officer rather than trustee.

Trustee Romano, who said he would seek re-election in November, said in an email that making a decision about the property "can be a painfully slow process."

"Although we are not yet able to tell you specifically what will happen in the vicinity of Kingswood, I can tell you that we have many of the same concerns as our neighbors (population growth, safety, traffic, storm water, environmental issues, finances, etc.), with or without additional development, and have instituted processes to ensure they are considered in any decision we take moving forward," he wrote.

Trustee Wayne Speer, who also plans to seek re-election, said he agrees with comments made by Romano.

William Lantry, who lives in Mason, also has picked up the paperwork that he would need to file to run for trustee, according to the Warren County Board of Elections.

Good for P&G, too

At this point, the property is zoned for general business, although the township made it clear in its request for qualifications that it would prefer a planned unit development that would blend a variety of residential, commercial, office and public uses.

The three development firms still in the running for the project are the Capital Investment Group of Cincinnati, the Schueler Group of Lebanon and Crawford Hoying Development Partners of Dublin, Ohio.

Reiners also dismissed the theory that Innovation Way is being extended through the former golf course primarily because Procter & Gamble Co., the downtown-based consumer products giant, wants quicker access to and from I-71 for its current and future employees in the P&G Mason Business Center on Mason Montgomery Road.

The township's request for qualifications makes it clear that access for P&G employees – 1,950 current employees and 1,350 that will be added when a $300 expansion is completed – is one reason why the road is being built. But that same document also points out that the road will "support continued investment in our area."

"This planning process was set in place long before P&G ever announced this expansion," Reiners said. "Some of these plans date back to the late '90s, so they definitely pre-date that expansion proposal from P&G. Will it benefit them? Absolutely, but it also benefits all of southwest Warren County."

Lutts mentioned the influence that one of Cincinnati's signature companies can have when it brings thousands of jobs to a community. Still, she didn't focus her dissatisfaction on P&G.