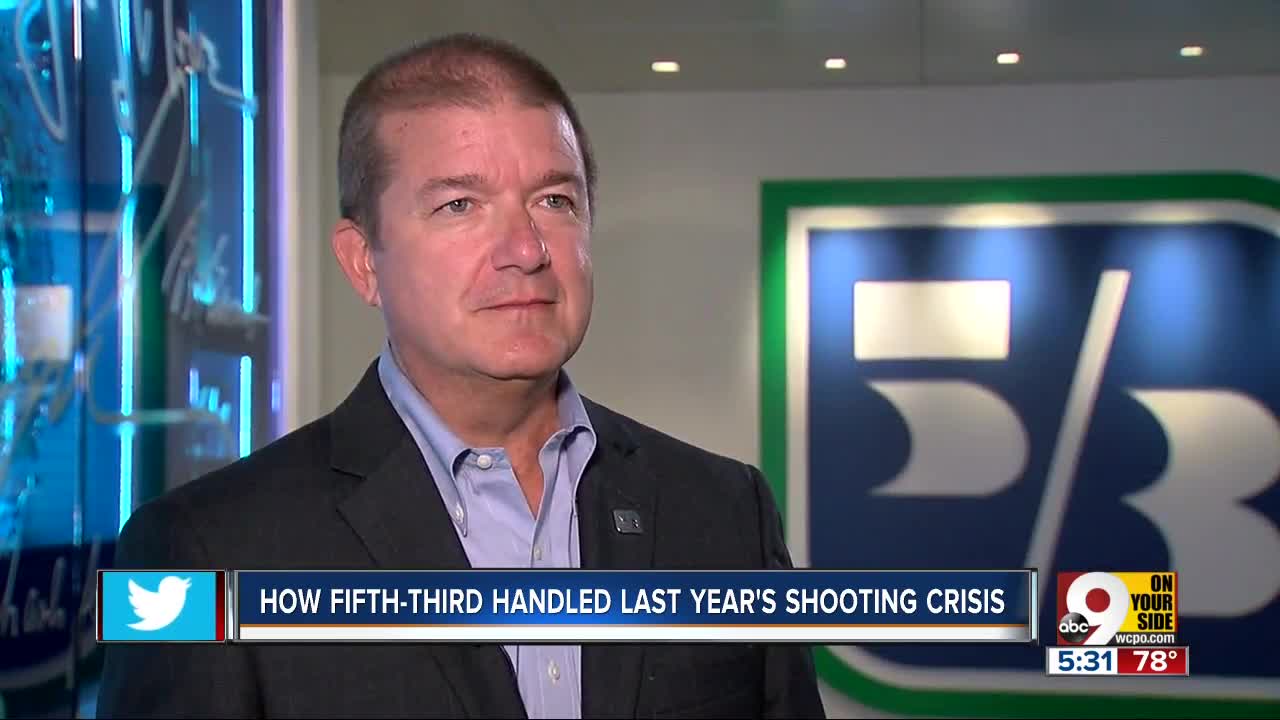 Watch our half-hour special, Fifth Third Shooting: One Year Later on Friday at 7 p.m. on 9 On Your Side.

In its annual report to shareholders this year, Fifth Third Bancorp. warned investors that “physical violence may negatively affect Fifth Third’s key personnel, facilities or systems” and “lead to significant reputational risks” for the company.

That disclosure may not come as a big surprise after a gunman killed three people and injured two at Fifth Third’s Downtown headquarters last September, but the bank actually disclosed this risk factor for the first time last year — five months before the Fountain Square shooting.

RELATED: An oral history: Nine people tell the story of the 2018 Fifth Third shooting and its aftermath

Maybe that’s why CEO Greg Carmichael seemed so well-prepared when he was forced to lead his company through tragedy. In the 20 days immediately following the attack, the career IT professional and three-year CEO was a steady and visible presence for the bank.

He quickly established two key messages: Fifth Third was thankful that first responders kept the carnage from being worse and that it wanted to focus on the healing process.

“You would think that would be a natural response from a CEO, but it isn’t,” said Paul Argenti, professor of corporate communication for the Tuck School of Business at Dartmouth University. “I mean, it’s just not the way everybody responds. Some people are concerned about legal problems. Others are just not gifted in terms of how they connect with people and how they communicate. Still others just really don’t know what to do, so they don’t do anything. I think he got it exactly the way you’d expect a human being to respond, and he did a very good job of it.

"It’s about as good as you can get for something like this, which is a terrible thing to go through for everybody.”

Argenti is considered a pioneer in the field of crisis communications, having taught some of the first courses on the subject at Harvard University in the 1970s. Among his published works is a Harvard Business Review analysis of how companies recovered from the 9/11 terrorist strikes.

“When an accident happens to a human being, you have the opportunity to rebuild,” he said. “I think it’s the same for companies. Are you resilient? Are you strong? Are you going to try to move on from something like this? Or are you going to just dissolve into something else? I think this is a pretty strong organization with a strong leader that has done exactly what you hope a good institution would do.”

From words to action

The bank quickly reinforced its words with action. Eight days after the shooting, Fifth Third donated $1 million to the Cincinnati Strong Fund for shooting victims and their families who were physically or emotionally traumatized by the events of Sept. 6, 2018. The fund raised an additional $239,000 from the community and distributed every penny of it to 33 people in January.

Eleven days after the shooting, the bank reopened its Cincinnati headquarters by inviting employees to place their handprints in blue and green paint on a large canvas in the bank’s lobby. That #FifthThirdStrong sign has been digitized. It will be part of a temporary exhibit in the bank’s history museum this month on the healing power of art.

The museum opened in March as the first phase of a lobby renovation project that will boost security by closing off the pedestrian breezeway from Fountain Square to Walnut Street while creating a more welcoming environment for bank customers. Spokesman Gary Rhodes said “Project Connect” was in the works before last September’s shooting, but the bank acknowledges it will help erase the memories of Sept. 6.

“It will create an open-air, two-story atrium type expansion of our lobby which should be open in 2021,” said Fifth Third spokesman Gary Rhodes. “In addition to that, we are doing some work on our local branch which opens up onto Fountain Square and creating very much of a next-generation branch to serve our customers as well.”

Argenti said the inclusion of a history museum, which documents how Fifth Third changed the banking industry in its 161 years in Cincinnati, is a “pretty smart” approach.

“You want to be careful with conjuring up any memories of these things and trying to keep it so you’re respectful of the past without getting morbid,” he said. “This museum is an interesting angle on that, trying to find a different way into the bank and thinking about the bank.”

Another subtle memorial was announced in April, when Fifth Third redesigned its famous lapel pins to include the word “Strong” and an open “3” in the bank’s logo to create an “outward sign of strength and resilience.” Lapel pins have been part of the bank’s culture since the 1980s, and they’ve been used over the years to celebrate causes like breast cancer awareness and heart disease. They’ve also helped in the healing process, Rhodes learned from a colleague last month.

“A day after the shooting she was traveling to New York City,” Rhodes said. “She had been at the Cincinnati airport. She was stopping in a store to get something. She had her Fifth Third pin on. And the owner of the store made a point of coming up and saying, ‘I’m so sorry about what happened at the bank. I’m glad you are here.’ And those words meant so much to her. She then went to New York City and had the same kind of messaging. So, what we’ve learned is that while this happened in the lobby of our building the impact was felt far beyond those walls.”

Often, companies do 'exactly the wrong thing' after tragedy

The way Cincinnati embraced Fifth Third sets it apart from other mass shooting incidents, which often lead quickly to lawsuits and public controversy.

For example, Walmart was criticized for its initial response to the Aug. 6, 2019 shooting that left 22 dead in El Paso, Texas.

“They pulled all their video game displays out because the sound of guns was offensive,” Argenti said. “They got grief because people thought it was too limited a response.”

Walmart expanded its response to gun violence this week by discontinuing the sale of certain ammunition products and asking its customers not to bring guns into its stores.

MGM Resorts International has been widely criticized for its legal strategy after the casino company sued victims of a 2017 shooting at its Mandalay Bay property on the Las Vegas strip. The company sued more than 1,000 victims in 2018, a move that could help it gain the upper hand in an ongoing legal fight that now involves thousands of people pursuing claims against the company.

“It’s exactly the wrong thing for them to do” from a public relations perspective, Argenti said. “When something bad happens, lawyers get involved. It often prevents companies from doing the right thing, doing the thing that might save them from some liability. Often, that it is at odds with common sense.”

More than a half dozen companies are facing lawsuits alleging they should have done more to prevent mass shootings, including Walmart, MGM Resorts and the Kroger Co., which operates a Jeffersontown, Kentucky store that was the scene of a shooting that left two dead in October 2018.

Beyond lawsuits, mass shooting incidents often generate public controversies over what to do with the site. Survivors of the Pulse nightclub shooting in Orlando, for example, have opposed attempts by the club’s owner to establish a museum at the former gay nightclub where 49 people died and 53 were injured.

“Our criticism is not about financial fraud,” the group says on its website. “It’s about earning a living off of our deaths and putting a $40M construction project over the needs of survivors.”

Fifth Third has avoided these kinds of controversies in part because “people do recognize it’s not a tragedy of their own making,” but also because of how it responded publicly, said Rick Miller, a local public-relations consultant known for his work in crisis management.

“It really came across as transparent and authentic and caring,” Miller said. “The ultimate guiding light for an organization in an issue is, do they understand and practice their values? And does it come from the top? Do they really act in economic interest or do they act in the interest of those stakeholders, employees, associates and customers who are closest to them? And I believe in this case Fifth Third nailed and did exactly what their values and what their practices said they that they should do. They actually did it.”

Political science professor Robert Spitzer said Fifth Third’s public response “may well have been a factor” in avoiding lawsuits and other controversies.

“If you’re smart corporate executives, you very much want to get ahead of events, not just react to events. Many corporations are not smart in that way,” said Spitzer, who teaches at SUNY Cortland and has written five books on gun control. “I would say this company was smart in that way. What they did was in public relations reputational terms very smart, but secondly it was very humane. And I think people appreciate the humanity a company can express.”

Rhodes said the experience has changed the bank’s corporate culture and deepened its ties to a community it has served since 1858.

“The events of Sept. 6 do not define who we are,” Rhodes said. “What defines who we are is how the city, the community, Fifth Third, everyone rallied together to recognize what had happened and to begin the process of moving forward and healing.”