Walmart is saving the best for last 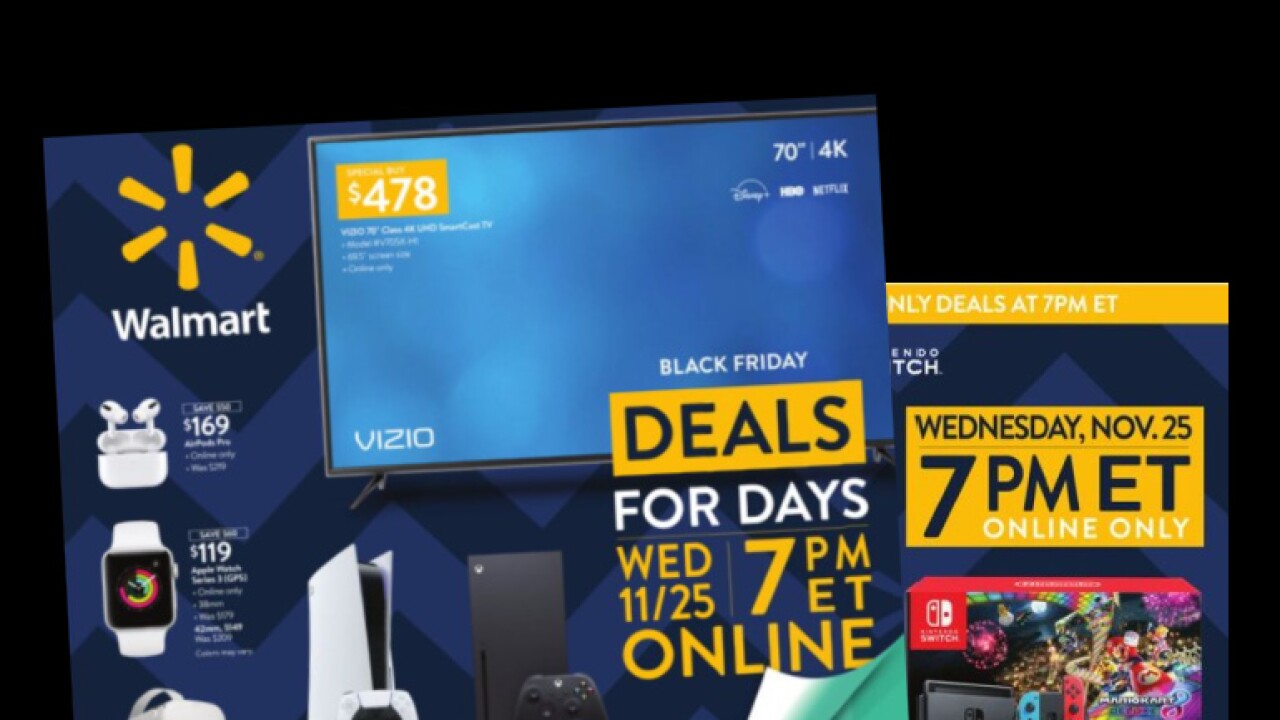 Walmart just released its final Black Friday ad, and it includes the kinds of steals that people line up hours to get each year. But in this pandemic year, there will be no Thursday lines.

To avoid store crowding, the retail giant has been staging three separate Black Friday sales this month, which began Nov. 4 and run through the traditional Black Friday on the day after Thanksgiving.

The final, and biggest, sale of its "Deals for Days" begins Wednesday evening at 7 p.m. on Nov. 25.

But it will be online only for 36 hours. Walmart, like most major retailers, will be closed Thanksgiving night, and will open at 5 a.m. Friday with in-store deals.

But even then, it will limit shoppers in the store to avoid creating a COVID superspreader event.

So here are the hottest deals beginning Wednesday, courtesy of BlackFriday.com:

· Nintendo Switch bundle with "Mario Kart 8 Deluxe" game download for $299. That's the full price of the console alone, and, given the demand for the Switch during the pandemic, you won't find any straight-up discounts this year on it.

· AirPods Pro at $169. That's $80 off and the lowest advertised price. BlackFriday.com has seen these at $194 throughout Prime Day and early Black Friday sales.

· Vizio 70-inch Class 4K UHD SmartCast TV for $478. That's the lowest advertised price BlackFriday.com has seen so far at this screen size, and it's a bit lower than the $529 price tag Best Buy will have on a 70-inch Samsung 4K TV for Black Friday.

· Video game deals. Highlights include several Nintendo Switch games for $30, including "Luigi's Mansion 3" and "Legend of Zelda: Link's Awakening" for $25 off and $5 lower than the current price at Amazon and Best Buy. Various titles for PlayStation and Xbox are also discounted to as low as $20.

Walmart's traditional Black Friday sale begins online at Midnight on Friday, Nov. 27, and in-store starting at 5 a.m. But realize you may have to wait outside in the parking lot if stores quickly fill to COVID capacity.

According to BlackFriday.com, this sale is more focused on home goods (towels, bedding) and toys, and does not feature the kind of big screen TV deals that tend to send shoppers into a frenzy (probably a good thing during a pandemic).

· Many bedding and bath deals.

But if you want the hottest deals at Walmart, you may want to get on your device shortly before 7 p.m. on Wednesday.