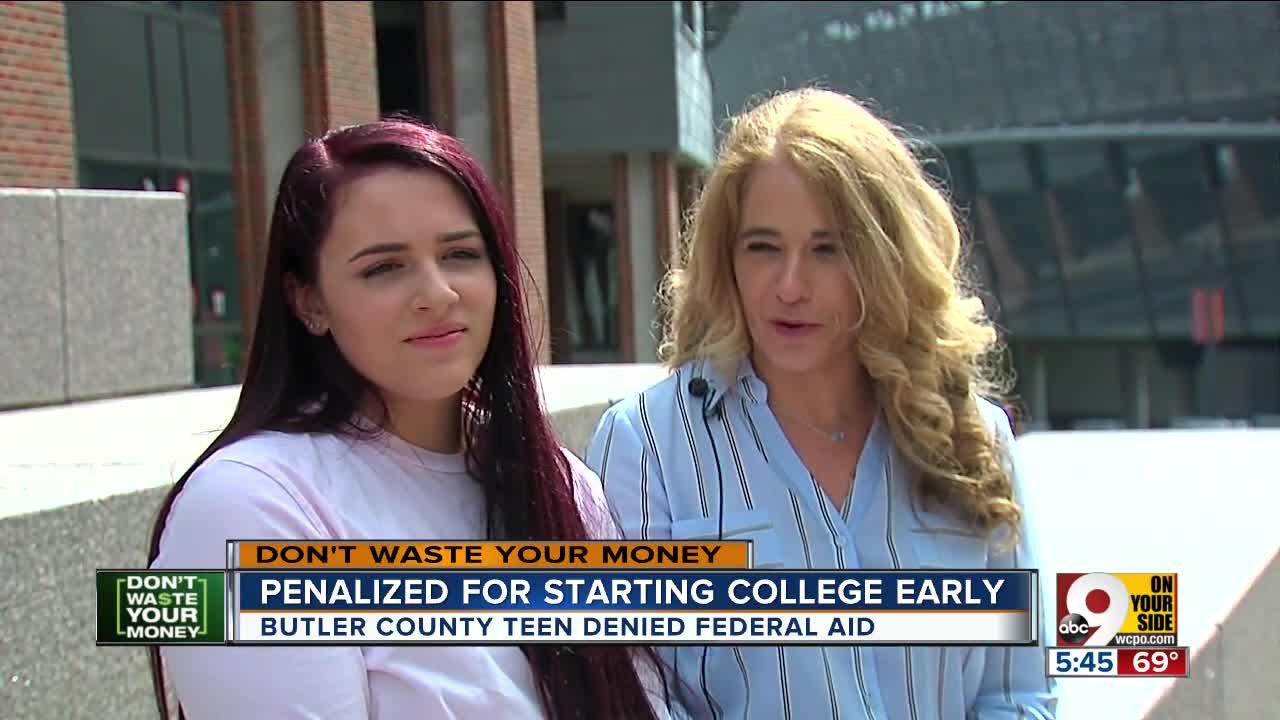 Caitlyn Morgan graduated from high school and started classes at the University of Cincinnati this spring — but found out too late her financial aid wouldn't kick in until autumn. Her family is frustrated. Is she being penalized for being smart?

A young Butler County, Ohio college student says she is being penalized for starting college too early.

Caitlyn Morgan is an exceptional young woman who wants to become a doctor.

She finished her high school courses a semester early at Lakota East, and rather than spend the spring sitting around and spending her days on Instagram, she decided to get a jump start in a college pre-med program.

"I worked really hard and ended up finishing the first month of school, and finished last September," Morgan said.

So she was applied and was accepted to the University of Cincinnati, and started college January of her high school senior year. She had even filled out the FAFSA form, and was offered $2,600 in federal aid.

Her mother Michelle Morgan said, "We are extremely proud of Caitlyn and how hard she's worked the past couple of years."

But mom Michelle's happiness turned to frustration, when they started getting overdue notices for the $2,600 that Morgan was promised in federal student aid.

"They were threatening letters, indicated they might turn it over to collection, and now we worry about her being able to enroll in the fall semester," her mother said.

Unfortunately, one of the first lessons Morgan learned in college had nothing to do with her classes.

Rather it's that universities have rules, FAFSA has rules, and getting either to make an exception can be almost impossible.

"I thought it had to be an error," Michelle Morgan said. But it was no error.

No diploma yet? No aid

University of Cincinnati spokeswoman M.B. Reilly told us she could not comment on an individual student's case. But she said the school is unable to bend strict rules when it comes to federal aid.

"Federal law requires that eligibility for financial aid at the college level is dependent on having graduated from high school with a diploma or G.E.D," Reilly explained.

You have to hope the school awards you merit aid, or parents will have to take out a personal loan for that freshman year.

We've asked the University of Cincinnati if they could at least remove the late payment penalties on the Morgan's bill.

We also contacted her high school principal, to see if there is any way they can assist, though we did not hear back.

The good news: Morgan will be eligible for her promised aid in the fall. But until then, she's behind on her tuition, simply, she claims, for working hard and starting college too early.