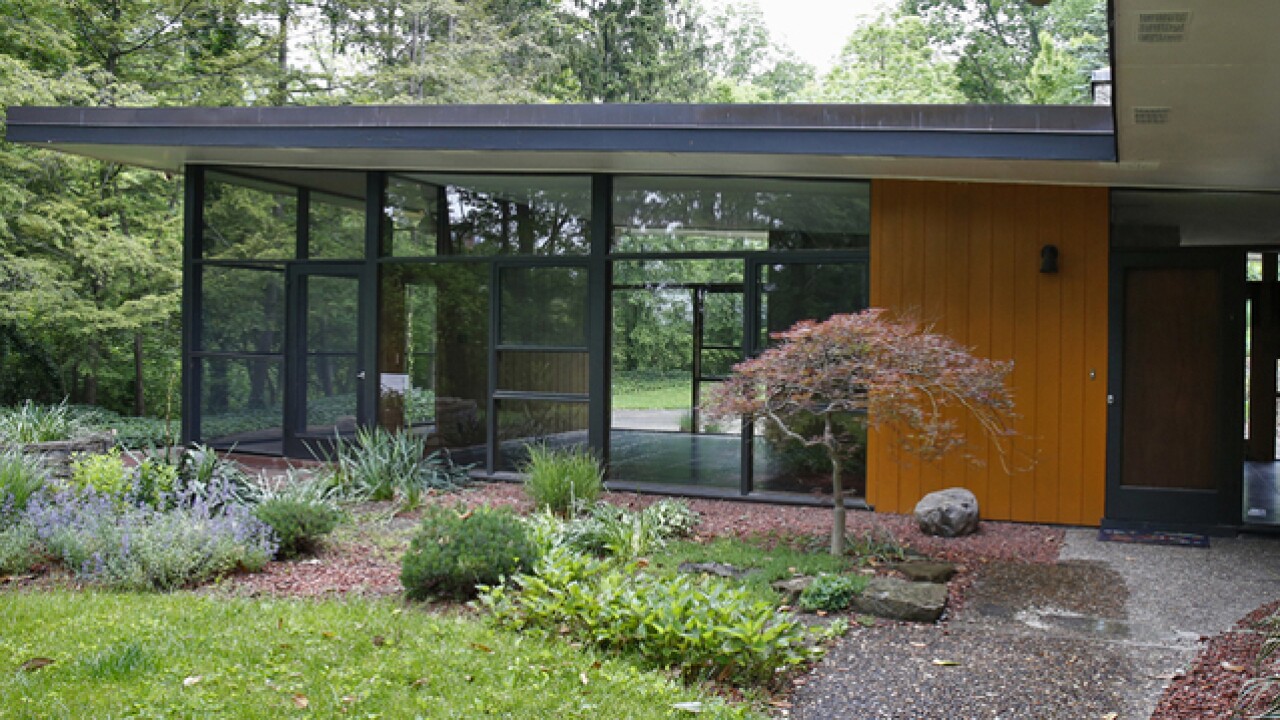 CINCINNATI -- Strauss is the house among Cincinnati fans of mid-century Modern design, and one of the earliest of its kind — a four-bedroom East Walnut Hills ranch built in 1951 — will have its third owner if a pending sale goes through (the asking price as $793,000).

Cincinnati Modernist architects Carl Strauss and Ray Roush teamed up in the late 1940s and quickly became popular among progressive Cincinnatians drawn to the simple, human-sized homes that the two married to wooded and hillside lots in some of the region’s most desirable neighborhoods.

Strauss, who founded Carl A. Strauss & Associates prior to Roush’s arrival, is the better known of the two architects and may have had the heavier hand in designing the 1951 Stevenson Lane house, which local architect Jose Garcia remodeled and added to in 2003.

“If you think of Modern homes and all the features they usually have, he did beautiful designs all over the United States from an aesthetic and functional standpoint,” Garcia said of Strauss. “There is an elegance … they are always quiet and never overdone, very subtle, very pleasant. They’re nice friendly homes.”

Dr. Joseph E. Ghory, a leading allergist whose walking was limited by polio, was one of the Cincinnati progressives who liked Strauss and Roush’s mostly stair-free, sharp-cut homes that brought the outdoors in through large windows.

The fourth of Joseph and Mary Ghory’s five children, Hyde Park allergist Patricia Ghory, remembers the house for its enclosed play yard’s aluminum swing set, sandbox and whirligig as much as she does the many events her parents hosted that spilled out from the house into its screened porch and spacious back and front patios.

“It was fun. It wasn’t big by any means for the five of us kids to be there,” Ghory said of the 3,000-square-foot house.

She said her father wanted an allergy-proof home, which the Carl A. Strauss & Associates’ design came close to providing. The bedroom wing had cork floors. Floors in the foyer and living room have radiant-heated floors made of 2-by-2-foot concrete sections painted in Cherokee Red, the color made famous by Frank Lloyd Wright, whose work the architects greatly admired. That floor treatment continues in the screened dining porch beyond the living room.

Ghory cherishes a vivid image of her mother regularly taking a double-bristle brush polisher to those floors, now mostly black with traces of red showing through.

She also recalled good times spent at a table in the house’s compact kitchen (a Frank Lloyd Wright standard), looking out the window to the up-sloping backyard. A visit to Wright’s iconic Fallingwater house in Western Pennsylvania triggered that memory.

“My husband and I went through Fallingwater and I said, ‘This is our house,’” Ghory said. “The kitchen, the free-standing dresser drawers, the cork floors. It was sort of uncanny. … My husband said ‘Patty, you’re not giving the tour!’”

Like Fallingwater, the Ghorys’ house had no air conditioning (it does now), yet Dr. Ghory believed good air circulation promoted better health, his daughter said.

“We had this huge fan on a stand, and we’d turn it on and the air would swirl,” she recalled. It was what allergists of the time like her father thought was best.

Modern architects of the time also thought flat and gently sloping rooflines were best, but hindsight has proved they might not have been. The Ghorys’ gently sloping roof was covered with little stones, and its downspout system struggled during downpours, Partricia Ghory said.

“We had this ladder on the side of the house,” she recalled. “During heavy rains, water would come over the spouts,” so her father would send his children up the ladder to the roof and they would use pails to redistribute the pebbles that had pooled in the middle where two slopes met.

Garcia solved that problem with his 2003 remodel, while expanding and remodeling the kitchen and adding a master-bedroom suite with all the bells and whistles contemporary homeowners require. Garcia’s new rooms are modern, but other than having large-pane windows and extensive wooden built-in bookshelves and storage spaces, his design style and materials differ from those used by Strauss and Roush.

“I wanted, with maximum respect, to create something to be visibly not him,” Garcia said of Strauss. “I thought (about Strausss), ‘You are too good to be imitated, so I’m going to do my own thing.’”

That new thing includes a dramatic 21st-century kitchen where there had been four small rooms. It now features a bentwood ceiling made of birch-veneered plywood that rises at a sharp angle to a row of three clerestory windows that pop up above the old roof at its low point; a large central island with 4-foot-by-4-inch stainless-steel light fixtures suspended from a stainless column; a smaller black granite-topped island on casters that can be moved to increase dining space; and more storage space than most home cooks need.

The master bedroom suite that Garcia added features high ceilings and windows, a gas fireplace set into built-in wood cabinetry and two sliding doors that open up the bedroom to the bathroom’s sunken tub area. It also has a floor-ceiling set of windows along the backside of the house and interior glass, all of which reach to the 11-foot ceiling, spreading natural light from room to room.

The master suite’s birch floors and black granite countertops tie into the materials Garcia used in the kitchen, and the black and white tiles in the bathroom match those in the first-level bathroom he renovated. Garcia chose to frame his windows in a warm-toned wood — Strauss and Roush used dark metal frames — and he ran a matching wood ledge with recessed lighting around the rooms at the same height as the lower of two sets of windows.

The master bath is almost party-sized. It features a 12-foot-long vanity with two above-counter sink bowls and wood-framed, mirrored medicine cabinets with recessed lights. The towering glass and tile-walled, walk-in shower is framed in stainless steel and has a rain showerhead set 8 feet above the floor, as well as two other showerheads and a built-in bench.

A walk-in closet and dressing area with built-in adjustable racks and clothing rods is accessible from the bathroom and through a mirrored door to the bedroom’s short entry hall.

The sleeping wing — whose cork floors couldn’t be restored and have been carpeted tastefully — has two other bedrooms, all off of a wood-paneled hall that is six steps up from the first level’s full bathroom and two bedrooms, one of which has a door that opens to a small patio in the front of the house.

The twin second-level bedrooms share a Jack-and-Jill bathroom and are divided by a wall whose 6-foot opening originally could be closed off by an accordion-style divider. The compact bedrooms feature built-in drawers, cupboards, closets and matching desks, all standards of Frank Lloyd Wright’s modern homes.

A large carpeted family room is located down a flight of stairs on the same level as the house’s two-car garage. It includes a wine cellar, a wet bar and a walkout to steps that lead to both the back and front yards.

Native Cincinnatian Carl A. Strauss (1912-2002) built his first house in 1937 — a fairly traditional home for his mother in Hyde Park. He is considered by many to be the dean of Cincinnati’s Modernist architects and was a world traveler.

Strauss, often with Ray Roush, designed dozens of treasured homes in Cincinnati and helped mentor future important architects such as Michael Graves, who interned at Carl A. Strauss & Architects through the University of Cincinnati co-op program.

A graduate of Williams College and the Harvard Graduate School of Design, Strauss had four children with his wife, Eleanor, including former Cincinnati Vice Mayor Peter Strauss.

Strauss was known for working well with nature — he hated cutting down trees — as well as with his clients to create simple layouts that met their specific needs.

“One of Cincinnati’s finest and most prolific post-war Modernist architects, whose Modernism is always tempered by extreme sensitivity to site, natural and artificial materials, and an understanding of his clients’ lifestyles.”