Once a drug user, NKY man now teaches yoga to people in recovery 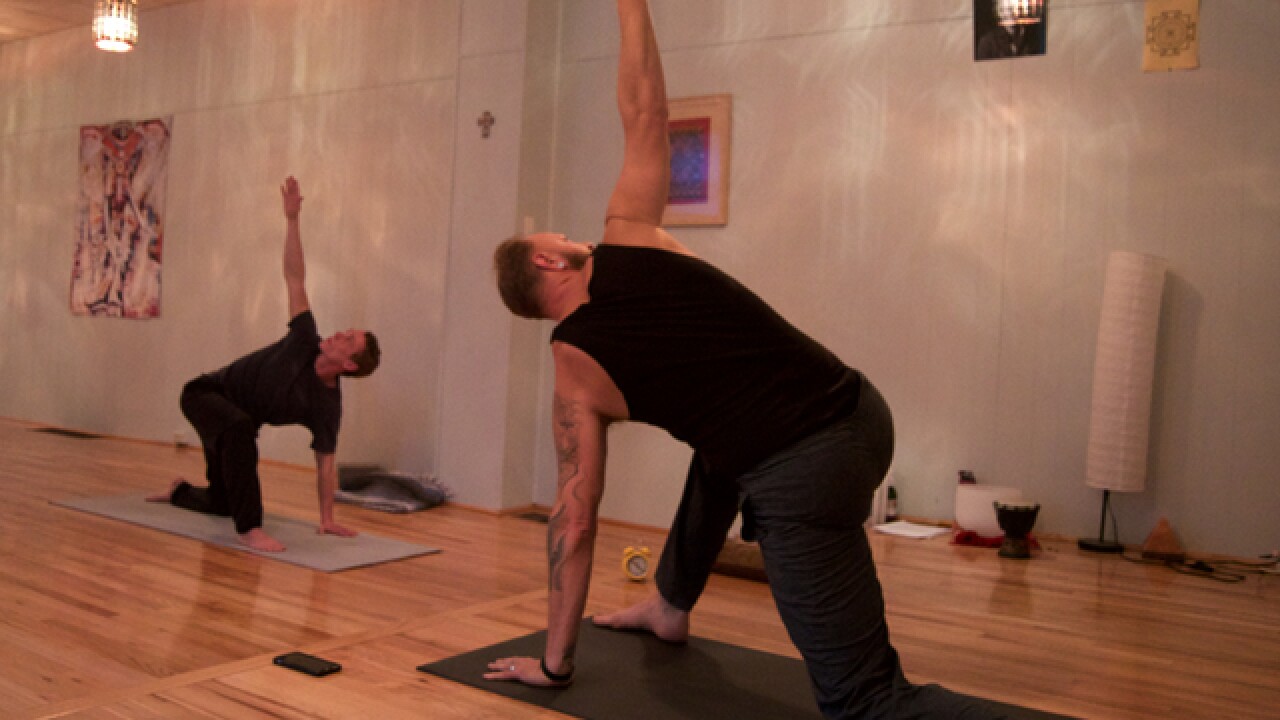 His fingers are spread open as if they’re being pulled apart. His gaze is fixed between his open palms.

He breathes so deeply it sounds like he is speaking.

"The descent to hell is easy,” he says. “But to make one's way -- to retrace the steps up, out into the golden air -- that is difficult. And this is the work."

Perhaps no one knows what it means to do “the work” quite like Ionna. Ionna has a decades-long history of drug addiction, but he says that’s not his story.

But it took him a long time to get here.

"If you have what I have, you know how you get here ... if you're an addict, there's no perfect combination for how you become an addict, you know? It just is,” Ionna said.

Years of working labor-intensive jobs paired with degenerative disc disease left Ionna virtually crippled. He said he started using prescription medications when he injured his back in 1999, but he didn’t know he was addicted for a really long time.

"I was literally digging through the sharps container on the wall to get the half-empty vials of Dilaudid and stuff out of it, six hours after having my back screwed together," Ionna said. "That type of unstoppable force. Like someone trying to hold their hand over your mouth, and you can still draw a breath ... That's the power that addiction has."

He went to a rehabilitation facility in southern Florida, where he first experienced yoga. He said he remembers standing with his palms facing forward, concentrating on feeling the warmth of sunshine on his skin.

"They're leading us through this practice, super gentle stuff," Ionna said. "But when you've been cut apart and sewn back together and you have scar tissue and nerve damage, (it's hard).

"The pain was there, and it was horrific -- but all of a sudden, I felt something really, really good for the first time ever inside myself. And I had never, since I was a child and a teenager on my BMX bike, I hadn't felt that since then. I felt a connection to something that came from in me, and it wasn't using drugs."

Yoga has been a part of Ionna ever since. He said yoga, coupled with 12-step recovery, propelled him forward.

"It took a while, but I realized that it was my practice, so it was something personal, something deeply personal, and it didn't matter what the person next to me was doing,” Ionna said. “It's my journey, my path and it's contained on a 2-by-6 yoga mat."

He started sponsoring men during his first year of recovery, and now he sponsors over a dozen people. Ionna also gives out medallions to those he sponsors in celebration of another year clean. He compared them to “birthday gifts.”

He said a man he sponsors is one of the best fathers he’s ever seen.

“Just to see him in the presence of his child is magical and beyond that,” Ionna said. “So that's why I do this. It's like, why wouldn't I do this? It's like living in a fairytale, it really is, coming from where I've come from."

In 2013, Ionna started taking teacher training classes at True Freedom Recovery Yoga. He said it was his way of "freely giving back what was given" to him.

Now, Ionna is a 500-hour yoga alliance accredited teacher. He has taken yoga to hundreds of people in treatment facilities across Greater Cincinnati -- from the Center for Addiction Treatment Downtown to the Grateful Life Center in Erlanger.

He also teaches at True Freedom’s studio in Norwood.

"We'll have people out of prison, we'll have them come here. We'll have women from local halfway houses, single mothers who were homeless, all walks of life,” Ionna said. “We'll have business owners, executives -- all types of people, school teachers. We'll have Norwood City school teachers come. It's badass."

From unmanageable to mindful

You don’t have to be in recovery to come to True Freedom. Ionna often begins class by asking students whether they want a more tranquil or vigorous session.

For Ionna’s student Nathan Lautz, class is a time to focus on his recovery.

The 32-year-old said it wasn’t until after college that he became addicted to opiates. He had bought pain medication from someone who lived in his hometown of southeast Indiana the summer before graduation. He said he was able to stop -- somehow -- long enough to finish school, and he graduated from Purdue University with a degree in psychology and philosophy in 2008. But he moved back home, where drugs were easily accessible, and soon became addicted to OxyContin.

“I didn't have to worry about the fear of failure if I went to grad school," Lautz said. "I didn't have to put myself out there ... I could just go home where I was comfortable, get a job, make some money, do some drugs. And that's what I did.”

He bounced around from job to job. He worked construction for a while, and then he laid tile. Around the same time, he traded OxyContin for heroin.

"I had all these hopes and dreams as a high school student and an undergrad to go get my Ph.D. and be a professor and all of these grand ideas and things I wanted to do, and now I'm living in mom's basement, shooting heroin, working these dead-end jobs with no future,” Lautz said. “I had no happiness, and I had no hope."

Lautz said he let go of his dreams because they were too painful to think about.

He went to a treatment facility in Indianapolis, but he said he wasn't ready "to accept what they had to offer." He'd sneak in substances to help him through detox and to help him sleep at night. He went back a second time in a desperate attempt to keep his job, he said.

"I wasn't ready to go to treatment at that time. I had already tried, and I was just like, 'Screw it, I'm just gonna die this way,’” Lautz said.

He said his life got to a point where it was unmanageable. He needed drugs -- morning, noon and night -- in in order to function. He overdosed in his mother’s home, and he was arrested in January 2016 for paraphernalia.

"It was the best thing that could have happened to me,” Lautz said. “I was just so worn out and sick of being sick, sick of using my loved ones for money and just sick of the life, but I couldn't find a way out of it ... I was locked behind bars where I couldn't get to drugs -- I just physically couldn't, and that was a blessing."

Once he was released, he went to the Salvation Army Adult Rehabilitation Center in Norwood, where he stayed for six months. During that time, a friend would pick him up every Friday and bring him to yoga.

Lautz said he did gymnastics and taekwondo as a child, but yoga brought out something completely different in him.

Meditation and mindfulness are essential components of recovery, Lautz said, and yoga helps him recognize cravings and feelings of attachment.

"We just go through our day in auto pilot and our mind is doing all of these things, and we don't even know it,” Lautz said. “When you stop and meditate, you can start to see how your mind is doing those things, and it's fascinating. You can see the feelings that arise and stop hiding from them and realize that it's not so scary. It's not something you have to hide from."

Lautz met Ionna about a year ago. He said Ionna, with his long beard and tattoos, didn’t look like the “stereotypical yoga person,” but he embodied peace and kindness.

“There are certain people I've met that, just a sense of inner peace radiates from them and their personality and the way they act and talk to others, and it's not some contrived kindness or mask that they're putting on, it's something they feel in their bones," Lautz said.

“I sensed that from him and have from the beginning. He's one of the people I've met that I can look up to and admire and try to find some of what he has, that inner peace and contentment that isn't just beneficial for him, it's something he shares with other people, and I respect that. I look up to that."

Ionna says it’s people like Lautz who motivate him to push through the pain.

"So the days where I can't move or I need help putting my socks and shoes on, knowing that these people are out there, that's what keeps me going,” Ionna said. “Knowing someone like me was out there, and someone reached a hand out to me.”

Called to give back

Like Ionna, Lautz said he feels called to teach yoga. He plans to enroll in teacher training class at True Freedom. Though he’s not credentialed yet, he teaches a small class at the Lord’s Gym in Covington.

Every Tuesday at 2 p.m., a group of men gather for Lautz’s class in a boxing ring in the center of the gym.

"I just want to spread joy and contentment to as many people as I can. That's an opportunity,” Lautz said. “If I can make one person happy, then I did something."

Over the past year, Lautz said he’s revived his dreams and aspirations.

He wants to continue studying the brain as it relates to meditation and mindfulness practices. He said he might pursue studying yoga or addiction science.

“I don't know where I'll be a year from now. I mean, who knows, and that's exciting too,” Lautz said. “I can kind of just do the next right thing ... and I'll end up where I'm supposed to be."

Ionna said his goal for next year is to take yoga into more communities across Greater Cincinnati.

"If I can show people or offer people a new way to live and help them find that, then I've lived a really, really good life,” Ionna said. “Who gets to live multiple lives in one lifetime?”

Ionna said he gets so much out of teaching yoga, he sometimes feels selfish.

“I feel like I've gotten back to what's always been here, to what I've worked so hard to cover up for so long. I felt worthless ... for 30 years of my life -- like I didn't matter -- and today I know that I do," Ionna said.

Just as Ionna has given out two, three and five-year medallions, his sponsor awarded him a six-year medallion for his anniversary Thursday.

"That's a huge day, but I've learned to celebrate the hell out of every day ... I walk around goofy. Life's really, really good, even when it's really, really bad. I just can't see myself doing this any other way."