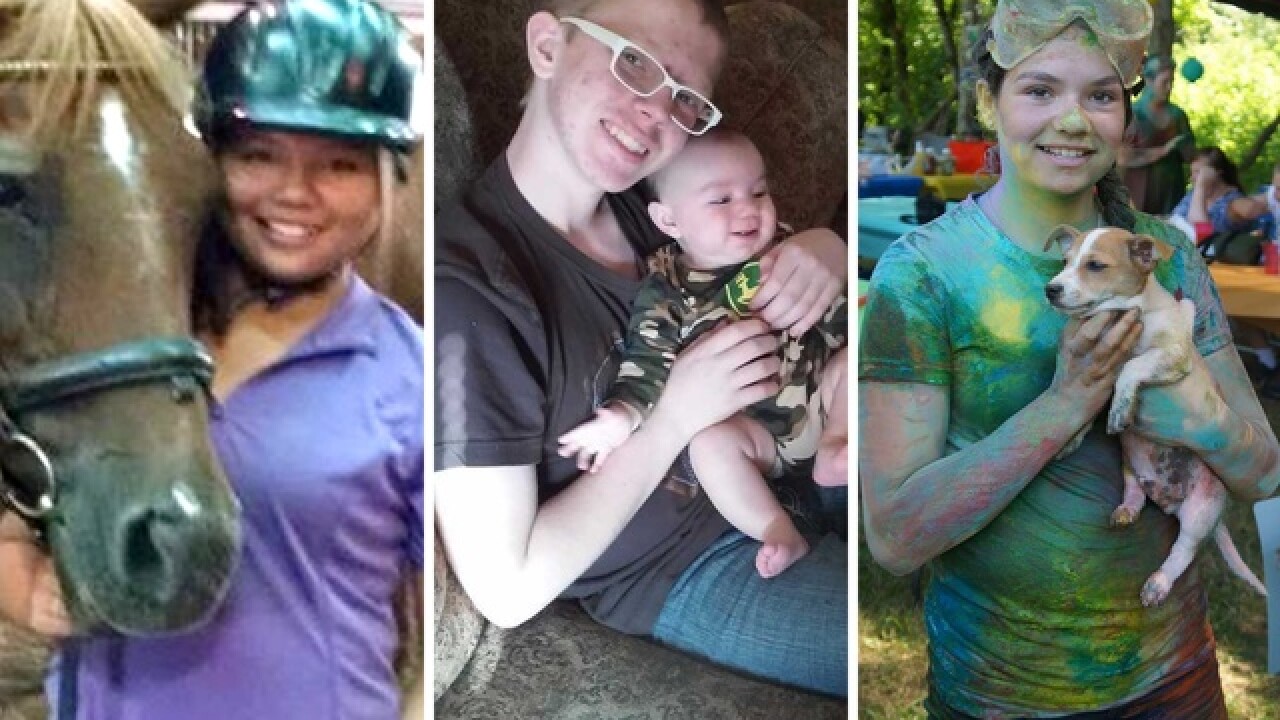 Copyright 2017 Scripps Media, Inc. All rights reserved. This material may not be published, broadcast, rewritten, or redistributed.
<p>Emilie Olsen took her own life in December 2014. Logan Davidson killed himself in March 2017. Lily Adams killed herself in June 2017. (Photos provided)</p>

When he was 6 years old, all he wanted was an alarm clock so he could wake himself up for the day, his grandmother said.

It's August, and Janie Adkins feels like she should be out getting Logan's supplies for the upcoming school year. She was his guardian for more than half his life.

"When I found him that Sunday morning, I thought he was asleep," Adkins said. "And that's a nightmare I relive every day, all day long."

Logan, 14, shot himself in his bedroom on March 5, 2017. He was the first of two students from Fairfield Middle School to die from suicide in the past six months. A third student, Emilie Olsen, also shot herself more than two years ago.

Classmates and parents claim the children were victims of bullying. Investigators said they didn't check their student files to find out -- and they're not required to. In Olsen's case, her student file revealed she had been bullied, even though detectives said the school told them otherwise.

The children's families said they are left to wonder if Fairfield City Schools did enough to help them, and if police investigated the cases thoroughly enough.

‘Mamaw, don't worry about me’

Logan wanted to go to college and become a scientist or a science teacher, Adkins said. He loved to fish and spend time in Rentschler Park, 400 acres of fields, meadows, woodland and wetland along the Great Miami River.

"It's a beautiful comforting place," she said. "I'm sure he found a lot of comfort here."

The two were close, Adkins said. But she only learned about bullying from Logan's friends on the day of his memorial: She said they told her he killed himself because he'd been bullied, and that he'd stepped in and stopped bullies from picking on them, too.

"His saying was always, 'Mamaw, don't worry about me,'" she said.

Logan was also fighting something very personal: A police report states he'd told a family member he might be gay a month before his death.

"I explained the situation that if Logan does come in (the office) it may be because him and his dad had this issue.

"They said, 'I haven't seen him. We have not had any problem with Logan,'" Adkins said.

Adkins said Fairfield's principal called her twice in the 24 hours after Logan's death; she spoke with her one time and left a message the second.

A week after Logan's death, she got two more calls from Fairfield: They were automated messages, to remind her Logan had missed class.

"It blew my mind," Adkins said. "The pain just came rushing back. The whole nightmare started all over."

She said she requested Logan’s school file but hasn't yet received it, so she doesn't know if anyone reported the bullying to teachers or administrators.

The police report on Logan's death doesn't mention bullying at all.

‘All of us missed it’

Lily Adams was about the same age as Logan, and she also went to Fairfield Middle School. Her mother Paula Adams said Lily was artistic. She sang and wrote poetry.

But Adams thinks she missed warning signs, mistaking them for normal teen angst.

"As soon as she would get home, she would be crying," Adams said. "She would run upstairs. She wouldn't talk to me."

Lily had mood swings and would be "really hateful to me," her mother said. Often, Lily would withdraw to her room to sing.

Like Logan, Lily was struggling with her sexuality. Her mother said Lily told her she'd support her.

Adams also said Lily was harming herself in the form of cutting.

"And then it got to be where it was from her breast line, quarter-inch marks all the way down to her ankles," she said. "I took her to the doctors. I've taken her to the hospitals."

Adams said she felt alone because doctors told her they couldn't help Lily. She said she contacted Fairfield Middle School about Lily's self-harm.

"They listened to what I had to say. They did call me a couple of times to tell me that she was having changes in behavior, and we started noticing a pattern," she said.

Adkins said her daughter's mood changed about a week before she overdosed on prescription pills in June.

She was more quiet and relaxed than normal, her mom said.

"And all of us missed it," Adams said.

Adams works as a psychiatric nurse. The pills Lily used to overdose belonged to her mother, who wonders every day how she didn't see the warning signs.

After Lily died, her friends told Adams she'd been bullied online. She said she found the evidence.

"The night she died, she actually got text messages that we have screen shots of that told her to 'Peace out, we knew you were going to kill yourself anyway,'" Adams said.

She doesn't know what the school knew about her daughter's bullying: Like Adkins, Adams has requested her child’s student file, but hasn't received it yet – and police didn't look at it.

Fairfield Township Police Sgt. Doug Lanier said if Adkins or Adams finds “any indication of bullying or harassment” after they receive and read the student file, a different police force may have to deal with the issue. That’s because the middle school is under the jurisdiction of the City of Fairfield Police Department – not the township’s police.

Three suicides at the same school should be a red flag, according to a leading expert.

"It certainly sounds like a cluster," Dr. Barry Feldman said. "Whether there was a contagion effect, that remains to be investigated."

Feldman is an assistant professor of psychiatry and the director of Psychiatry Programs and Public Safety at the University of Massachusetts. The relationship between bullying and suicide is complicated, he said, with no direct link.

Roughly 30 to 35 percent of students are targets of bullying, Feldman said, but not all will contemplate or attempt suicide. Other factors like depression, anxiety and family issues come into play.

"Being the target of bullying can isolate individuals," Feldman said. "They get embarrassed. They are ashamed by their peers. Those relationships are very important to some people."

Adams said Lily asked for extra snacks and school supplies. She thinks her daughter was trying to be accepted.

Adkins said Logan didn't show any signs of depression or other problems in the days and weeks before his death, except he started missing some homework assignments. But she said she's convinced he told someone he'd been bullied.

Feldman said teachers should look for changes in behavior. And schools should have comprehensive suicide prevention programs, so they can intervene when they see trouble.

But the responsibility can't be dumped on schools, he said. Parents have to talk to their children about suicide, too.

"There's a myth that is unfortunately strongly perpetuated in our society, that if we talk about suicide -- that if we bring up that topic -- that we're going to plant a seed and maybe give a child an idea to kill themselves.

"That's absolutely not the case," he said.

Adams is on leave from her job because of a stroke. Her 17-year-old son is going into his senior year, and she said she worries what backlash he might get from Lily's suicide.

She said she wants to be an advocate for families through Project LIRA, a nonprofit she created in honor of Lily and named for her initials. She sees Project LIRA as a proactive step to stop bullying.

Fairfield: We ‘ensure a safe and secure environment'

Logan's grandmother said Fairfield's staff has changed in the past few years, but not enough is different. She thinks there should be mandatory suicide tracking and education. Right now, the state only requires schools to track reports of bullying.

And she said she wonders about the children who may have bullied Logan.

"What have these kids been taught or went through in their home to make them want to see other children or other young people being bullied and picked on?" Adkins said.

Fairfield City School District spokeswoman Gina Gentry-Fletcher said the district is proactive in how it handles bullying and utilizes many strategies throughout the course of the year to “ensure a safe and secure environment.”

She said the district uses a Positive Behavior Interventions and Support program, which is designed to “teach and reinforce positive behaviors.” She said the schools also participate in the “ID Project” and the “Be the Difference Program,” which allow students to “learn about each other and have the opportunity to hear each other’s stories.”

“These programs ... ultimately result in a more positive environment for our students,” Gentry-Fletcher said. “Any bullying allegation brought forward is taken seriously and investigated.”

The new position comes as the district is embroiled in a lawsuit over Emilie Olsen’s suicide. Emilie’s parents filed a federal lawsuit in December 2015, accusing nine Fairfield City School District officials, the school district and the school board of knowing she was bullied at school and not acting to stop it before she committed suicide.

In their multi-count claim, the Olsens allege a failure at every level -- from teachers to guidance counselors, assistant principals, principals and the district superintendent -- to provide a safe learning environment for their daughter.

Parents and community members called for Fairfield City School leaders to change the way they handle bullying cases following Emilie’s suicide, but officials said at the time they would not change policies.

WCPO's Joe Rosemeyer and Maxim Alter contributed to this report.