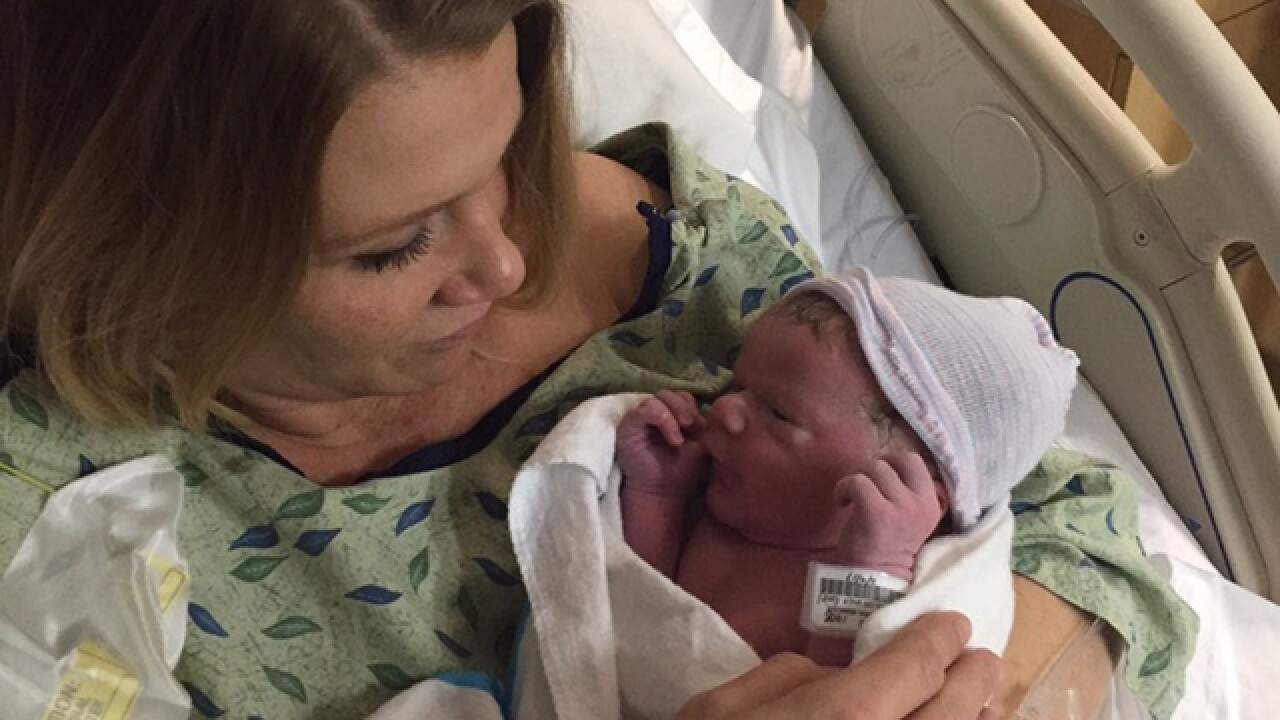 EDGEWOOD, Ky. – Holly Schulkers gave birth to her baby on Feb. 9, 2017. Two days later, a social worker told her she couldn't be alone with her daughter.

The reason: A drug test that wasn’t even accurate, Schulkers said.

Schulkers had taken a prenatal drug test for opiates before giving birth. She said a hospital social worker told her she tested positive for opiates.

"We told her there had to have been a mistake, that there was no way," she said.

In a federal lawsuit filed in Kentucky last month, Schulkers accuses St. Elizabeth Medical Center in Edgewood of notifying the Cabinet for Health and Family Services about her positive drug test before more reliable drug tests proved the first test was wrong.

"They did not give me another test until the cabinet was already called and they were at the hospital," she said.

As Schulkers held her newborn baby, she said she was repeatedly forced to deny she used opiates including heroin.

"I thought they were just going to take my kid out of the room," she said. "This was just a huge mistake."

St. Elizabeth Healthcare and state officials declined to comment on the case because of the lawsuit.

"We cannot comment on any prospective or active litigation matters, nor would we ever comment about anyone who might be or have been our patient without their express authorization," hospital spokesperson Guy Karrick said. "We place a high value on all our patients' health and privacy. Rest assured, St. Elizabeth follows all necessary protocols and procedures to ensure the safety and health of all patients."

Schulkers told the 9 On Your Side I-Team a state social worker gave her a "prevention plan" and told her if she didn't follow it, her other children would be removed from her home.

According to Schulkers’ lawsuit, the plan stated she wasn't allowed to be alone with baby Allie – even to breast feed – without another "approved" adult present. Without the plan, Allie could end up in foster care.

That went on for the first two months of baby Allie's life while the state investigated, Schulkers said. Her attorney, Paul Hill, said he believes such prevention plans should be decided in court, but they're not.

Hill also said he wants to know why the hospital didn't run a confirming test and why they contacted the cabinet before they had an umbilical cord test back.

Umbilical cords are tested after birth to check if a baby was exposed to drugs while in the womb.

"You can't turn a blind eye to the proof, and the proof in this case was the umbilical cord and the second test," Hill said.

Why hospitals are drug testing women

Cabinet for Health and Family Services spokesperson Doug Hogan said birthing hospitals can base their drug testing policies on whichever type of screening they prefer.

St. Elizabeth Healthcare drug tests all pregnant women prior to giving birth unless they opt out. So does every other birthing center in the Northern Kentucky and Cincinnati area. It's part of a voluntary universal drug testing program that started in 2013 to help identify opiate-dependent newborns.

The Health Collaborative, a local nonprofit health group, coordinated the rollout of the universal drug testing program among all birthing centers in the area in 2013. Tonda Francis, vice president of regional coordination and clinical initiatives for the organization, said a newborn usually doesn't begin showing withdrawal symptoms for the first 24 to 48 hours.

"By having this early detection, they're able to closely monitor the baby," Francis said.

The universal testing program is part of a response by local hospitals to the "surge" of drug-addicted infants being born in the area. From 2009 to the beginning of 2013, the number of babies exposed to drugs like Percocet, methadone and heroin quadrupled from 10.8 infants out of 1,000 births to 46 per 1,000 births, according to Cincinnati Children's Hospital Medical Center.

Dr. Scott Wexelblatt developed the universal drug testing program. He's affiliated with Children's Hospital and is the regional medical director for newborn services. Dr. Wexelblatt declined to be interviewed for this story through a Cincinnati Children’s spokesperson, James Feuer.

A prompt diagnosis allows caregivers to initiate treatments to decrease signs of withdrawal and reduce the possibility of seizures and death, according to Feuer. In pilot research for the program, officials said as many as 20 percent of infants found to have been exposed to opioids would not have been detected under old practices.

"Universal testing does not require providers to screen patients, an approach that could be considered discriminatory if perceived as targeting individuals with specific socioeconomic, geographic or racial origins," Feuer said. "We believe that universal testing improves the health of babies and provides a safe, effective and a higher quality of care."

Cincinnati Children's provided the following data on the number of babies born and tested for drugs in regional hospitals:

Drug tests getting it wrong

Is it common for pregnant women to receive false positive results on drug tests like Schulkers did? The I-Team asked eight local hospital systems for data and discovered hospital officials aren't required to track those results -- and they don’t.

The I-Team also discovered hospitals in Kentucky and Ohio determine what drug screen to use and when to notify the state or county. There is no government oversight.

"Like anything else, it has to be done appropriately," Dr. Mike Kalfas said. "There have to be checks and balances."

Kalfas is an addiction specialist. He's not connected to Schulkers’ case, but he does thousands of drug screens each year. He said it's fairly easy to register a false positive on a drug test.

Blame it on bagel chips?

Schulkers said she doesn't do drugs and never has, so she isn’t sure how her initial drug test came back positive. But she has a theory: she believes it's the "everything" bagel chips with sesame and poppy seeds she ate hours before giving birth.

"It is possible that she could have gotten a false positive for opiates or morphine if she ate enough poppy seeds," Kalfas said. "That's true."

The Kentucky Cabinet for Health and Family Services has asked a judge to drop Schulkers’ suit.

In a response to the lawsuit, St. Elizabeth didn't specify what policy it has regarding when to notify the state of drug test results, and argued it was irrelevant. The medical worker who notified the cabinet was following state law, hospital officials said. They are also asking a judge to drop Schulkers’ suit.

Schulkers said she understands the opioid addiction crisis in the area and supports universal drug tests, but she's calling for change.

"They need to have a better testing protocol and, once the cabinet has those results, they need to close the case," she said.

But Schulkers said she also doesn't want the same thing to happen to another family.

"If you're ever in this situation, you need to get a lawyer and fight it," she said.

Dr. Kalfas recommends women ask these questions when they are drug tested before giving birth:

• Who is interpreting the test?
• What will happen with the urine sample?
• Is there confirmatory testing (a second test, if the first test comes back positive)?
• What kind of test is that confirmatory test?
• Who interprets those results?
• Will I have access to the results?