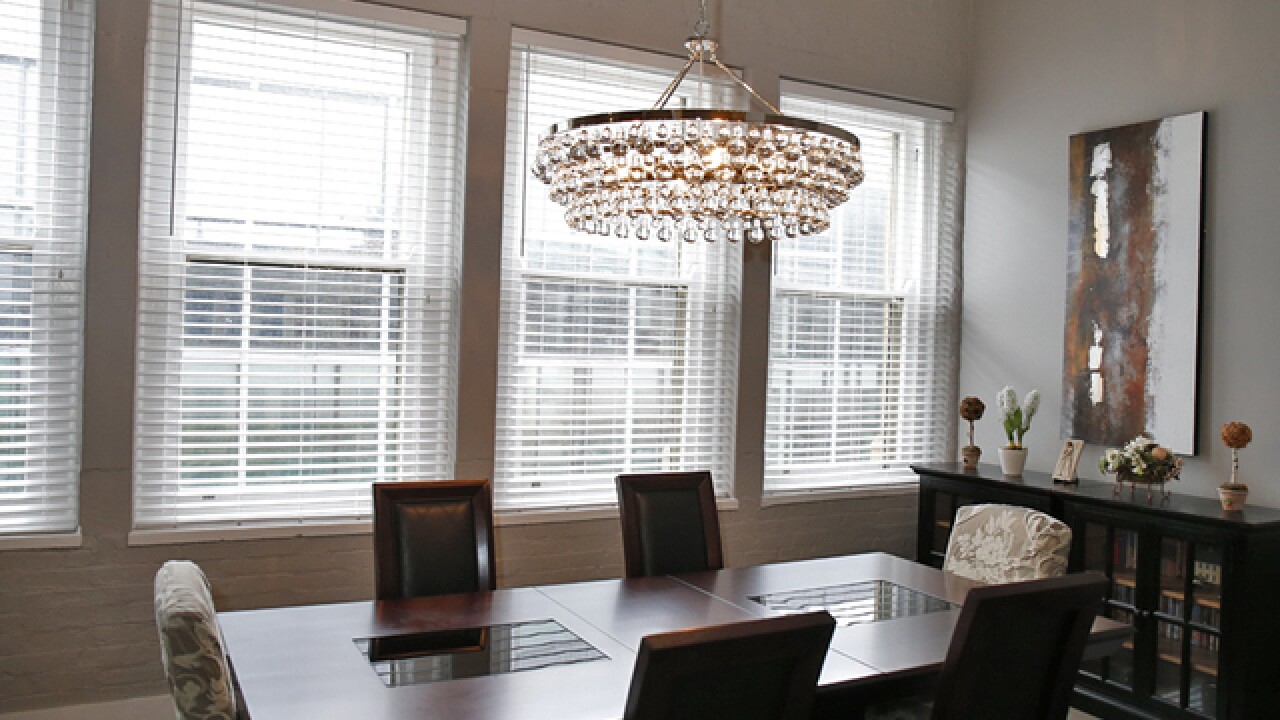 Copyright 2018 Scripps Media, Inc. All rights reserved. This material may not be published, broadcast, rewritten, or redistributed.
Gary Landers
A view of thedining room in the condominium of Janet Nelson, located in the Williamson Lofts in downtown Cincinnati Thursday, February 25, 2016. (Photo by Gary Landers/WCPO)

CINCINNATI -- Single mother Janet Nelson began looking to move closer to Downtown after her daughter graduated from high school in 2014. Nelson moved from where she had lived for seven years in Mason to an apartment in Loveland, but felt her social life was drawing her to Cincinnati.

“The more I kept coming down here, I just realized everything I do is right here,” said Nelson, a human resources manager at Procter & Gamble and an avid salsa dancer.

The U.S. Army veteran and suburban Los Angeles native had lived in many places, but always 30 or 40 minutes outside the heart of the closest big city. Nelson searched for a place in Hyde Park and Mount Adams. She looked in Over-the-Rhine, but nothing was finished in a style she loved, and she had security concerns after she witnessed a shooting there.

“I go there for entertainment,” she said of Over-the-Rhine, “but I didn’t want to live there.”

A friend living Downtown told Nelson about some apartments being converted to condominiums in an 1890 building on Fifth Street near Central Avenue. She looked at photos of a fifth-floor unit on zillow.com and called its listing agent. The condo had been sold.

That brought her to Kathy Grossmann, a developer/designer who is upgrading several units in the same Williamson Condos building. She agreed to show Nelson another fifth-floor unit that was a work in progress.

“I fell in love with it,” Nelson said. “Not that things were all done, but I could see it.”

For the $392,000 Nelson paid for her condo, she got a lot of her favorite color, gray — on all the walls, the fireplace surround and the original cement floor in the kitchen and great room. White ceilings and trim throughout with black cabinets and some wood features give the décor contemporary pop.

Grossmann and her husband, Tom — under the company name Perry Street Real Estate — own a number of units in the former manufacturing plant.

She said she had no professional experience when they started upgrading public space and residential units in the old building six years ago. In between rearing six children, she gradually grew into her role as project designer, building on lessons she learned from interior decorator Kim Fox and property rescuer Andy Howe, who lived in Williamson Condos.

Nelson moved into the apartment last June and negotiated to keep Grossmann’s staging furnishings until she could make her own décor decisions and purchases.

She said she is leaning toward a contemporary-but-rustic look. Her current favorite furniture store is Nadeau in Kenwood, which touts itself as offering “furniture for the soul” that Nelson said goes well with her condo’s industrial ambience.

Grossmann’s decorating strategy in Nelson’s unit was to combine items gleaned from her husband’s occasional “suit and tie dumpster diving” with pieces they’ve snagged at floor sample sales and closeouts.

Nelson’s condo has the highest ceilings — about 14 ½ feet at their peak — in the 1890s manufacturing building. Ceiling boards, 6-by-12-inch wood beams and metal brackets, all exposed, were painted white, and the sprinkler pipes are now silver to match the four suspended rail light fixtures in the great room and kitchen Grossmann purchased at EFX Lighting.

The unit had been an apartment with half walls dividing the master bedroom and dining room from the great room. A non-load-bearing wall with a cutout window to the living room boxed in the kitchen. Grossmann’s crew pulled up all the carpet and removed the kitchen wall — leaving a load-bearing concrete column — and created a great room with a floor-to-ceiling, gray slate, electric fireplace as its centerpiece.

They built in a large master bedroom closet and extended its wall to eight feet before it intersected mechanicals that could not be moved. The room has new carpet that matches that in the guest room.

An all-new master bathroom is accessed through two dark wood-framed doors with frosted glass panels that slide open on a rail like a barn door. The bathroom, painted a medium gray and white like the rest of the condo, has light gray ceramic tile flooring, a double vanity, a tub/shower combination and a linen closet of the same frosted glass and dark wood design as the barn door.

The master bedroom has one window facing west toward the old Hudepohl Brewery smokestack south of the Sixth Street Viaduct and Queens Tower in East Price Hill beyond it.

The 1980s-style kitchen, however, was not. Grossmann had it demolished and gave it a fresh, contemporary look. She reconfigured its layout and chose high-end finishes along with stainless steel appliances from Recker & Boerger. The countertops, though they appear to be marble, are “Minuet” quartz. The backsplash is made of elongated, gray glass subway tiles.

The Chandelier is ‘Legend’

The custom-made, self-closing cabinets, which were set at varying heights and bought at Ideal Cabinetry in Montgomery, are matte black with brushed steel pulls from Norwood Hardware. These finish choices by Grossmann are what made the Williamson condo stand out from others Nelson had toured, she said.

Heading to the second bedroom, guests pass a second full bathroom with a door that opens out instead of in, which Grossmann said most contractors prefer. She had to fight for the right to save space in the bathroom by keeping the door out of it.

The bathroom is much smaller than the master but mimics its overall design. The room’s selling feature is the glassed-in shower whose gray tiles extend to the 8-foot ceiling. The main wall is divided by a vertical stripe of small, glass subway tiles.

Although Nelson will give up her current furnishings when she buys her own, one thing she will keep is the chandelier over the dining room table in the great room. Made by Robert Abbey, its bling quotient is undeniable.

“(Singer) John Legend has it in his New York apartment,” Nelson said with a big smile.

Grossmann will never forget how her husband worked hours beyond midnight to piece the chandelier together, one of a couple of hundred glass bubbles at a time.

“He found out he had a knack for putting wires into glass chandelier balls,” she joked.

The chandelier, the finishes, the openness of the high-ceiling great room and the location are what Nelson said added up to a purchase. Other condos on lower floors were selling for significantly less, she said, but “this open, industrial feel is really what sold it. It was worth it.”