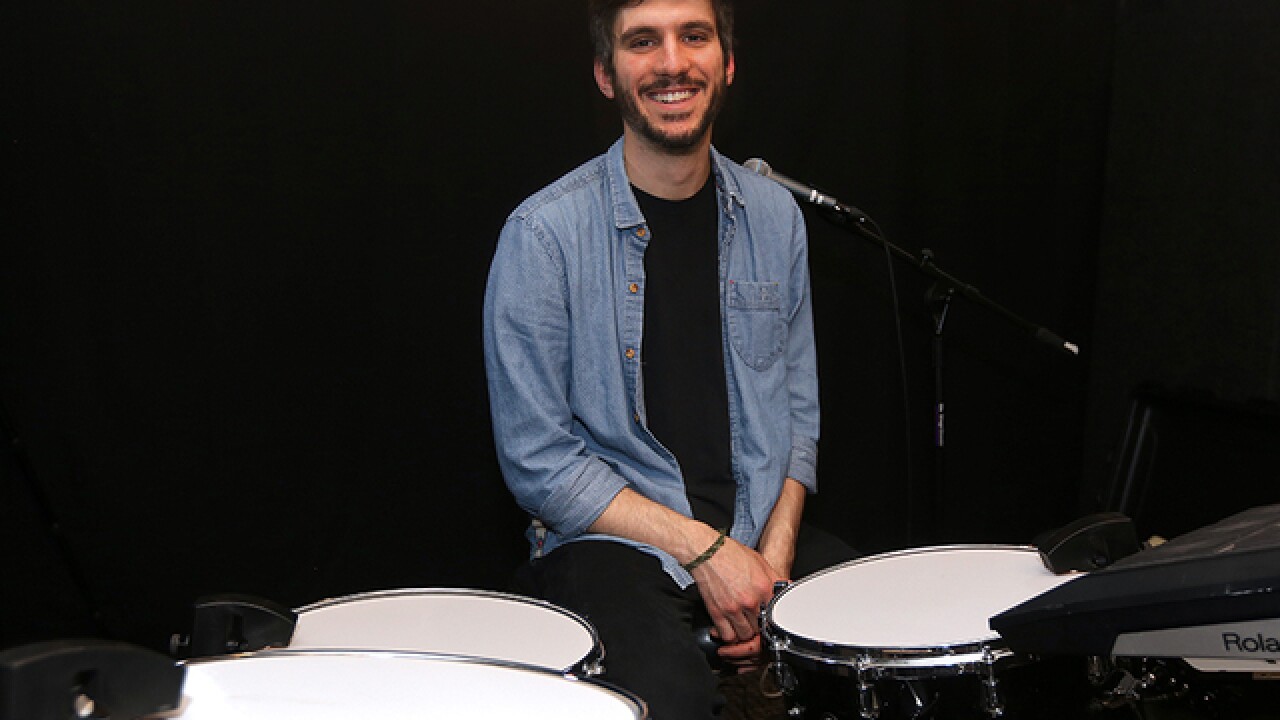 CINCINNATI -- Northside-based percussionist Ben Sloan is beating on a standard drum kit, but the oscillating chords, birdcalls and Star Trek-esque bleeps sound anything but typical.

"It's more like you're curating a set of sounds," the UC College-Conservatory of Music graduate said. "It's on the cusp of being a full composition and then also just improvising with the colors and sounds. Sometimes I don't really know how it's going to unfold. I have an idea and so sometimes if I hit it and it doesn't make the sound, I'm like, 'Oh, gotta roll with it that way.'"

A sensory percussion trigger composed of a tiny mirror and light sensor sits atop each drumhead, which Sloan has mapped out into regions that produce various sounds, effects and loops when struck. Tapping the drum's rim acts like a keyboard's shift key, bringing up a whole new range of samples that Sloan has preprogrammed and created with audio software.

"It allows you to play electronic music with the same dynamic flexibility that you get when you're playing a live drum set. I have them on these mesh heads, which are silent, but you can also put them on actual drum heads," he said.

Sloan's stop by WCPO Lounge Acts is only the second time he's ever performed with this new technology, which he got the opportunity to explore when drummer Bryan Devendorf asked him to be artist-in-residence for the new National Homecoming festival coming to Smale Riverfront Park this weekend.

"I've been doing a lot of production work and sitting in my room, which is also my studio with cables everywhere and crafting stuff and just making little ideas," Sloan said. "It was an opportunity to take that material and bring it to A Delicate Motor, which is a band I perform in under the leadership of Adam Petersen ... and collaboratively expand upon these little tiny ideas."

Alongside his 4 p.m. Sunday slot with A Delicate Motor, Sloan's stoked to be performing with German electronic duo Mouse on Mars on Friday evening and with The National on Saturday night.

"Mostly I'm really motivated by the fact that (Bryan Devendorf of The National) enjoys what I'm doing. The inspiration is like encouragement from somebody who is at the top of this kind of world. And he's like, 'You got it. You're good!'"

Growing up in a musical household, Sloan was destined to gravitate toward the arts. His dad fed him a steady diet of good music and helped him set up his first recording studio, while he inherited his stepfather's drum kits and instincts. His mother founded ArtWorks, the nonprofit responsible for splashing murals across town for more than two decades, meaning he was "steeped in the arts" by the time he wrote his Walnut Hills High School entrance essay proclaiming Jimi Hendrix's drummer Mitch Mitchell as the historical figure he'd love to meet.

"Maybe he would give me his drumsticks?" Sloan laughed.

Since studying jazz at CCM, Sloan has played in several local and national music projects, including WHY?, Lazy Heart and Fresh Funk. He also teaches percussion at MYCincinnati, a free youth orchestra program in Price Hill.

Last year, Sloan transformed scrapyard junk into children's gold when he dreamed Price Hill's Percussion Park into existence with a $10,000 grant from People's Liberty. Propane gas tanks became drums and pipes morphed into a marimba for kids to jam on at a formerly vacant lot on Warsaw Avenue.

"It was a cool way to tie in what I do with my students at MYCincinnati with the neighborhood at-large. And then also we travel there every once in a while to play," Sloan said.

Keep an eye out for A Delicate Motor's second album, Fellover My Own, coming in June. Sloan said they'll also record his work as artist-in-residence for The National Homecoming and make that available online.

Also catch Sloan at a free, pop-up show at 10 p.m. Thursday at Sartre OTR (1910 Elm St.); on stage with Mouse on Mars Friday at the Cincinnati Masonic Center; and with The National Saturday at Smale Riverfront Park.