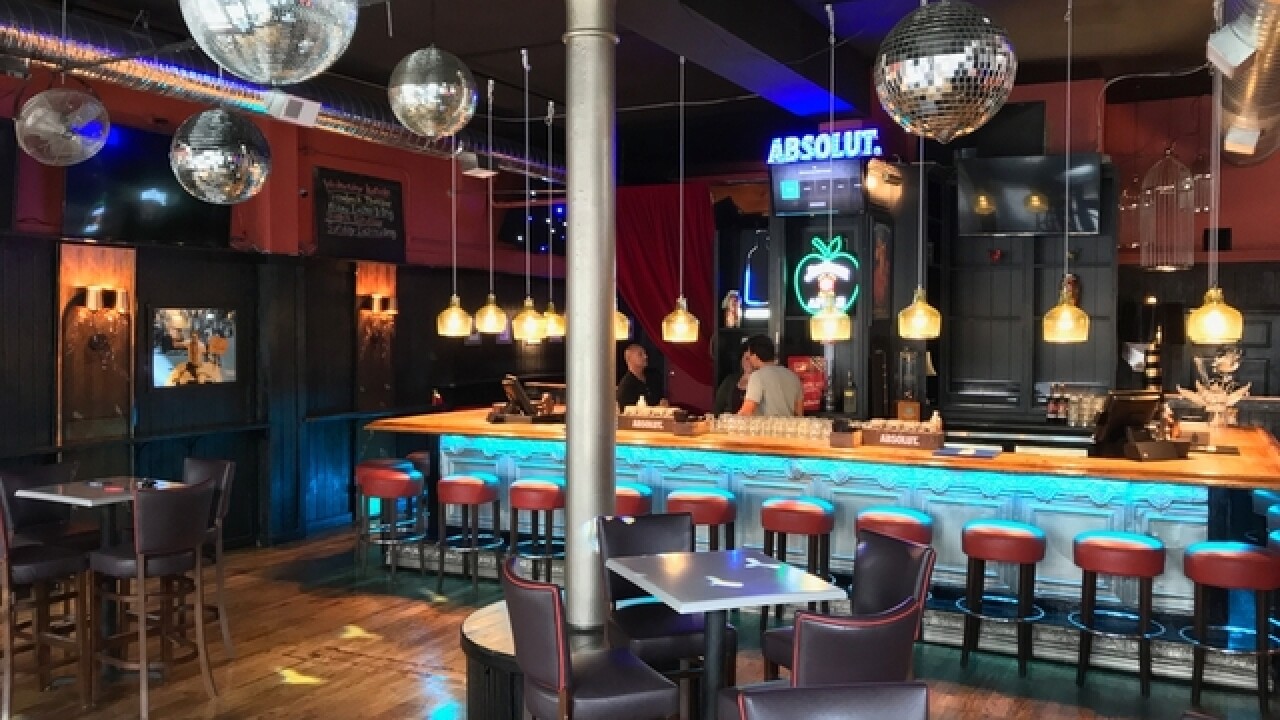 Copyright 2018 Scripps Media, Inc. All rights reserved. This material may not be published, broadcast, rewritten, or redistributed.
Brian Mains | WCPO
<p>Get ready to work up a sweat on a Technicolor-lit dance floor while sipping tropical-themed drinks garnished with candy. The Birdcage promises to be an "upscale LGBTQ nightclub and lounge that aims to be the premier destination for dancing, drinks, and entertainment," according to owner Juan Imeroni. The owner hopes to set a grand opening date for the all-in-one nightclub located at 927 Race St., Downtown this week. Imeroni and his business partners have spent the past two months remodeling the interior of the former gay bar Shooters, which closed two years ago. </p>

CINCINNATI – Get ready to work up a sweat on a Technicolor-lit dance floor when The Birdcage opens Downtown.

On Tuesday, owners were putting finishing touches on the new LGBTQ-friendly nightclub at 927 Race St. One of those co-owners, Juan Imaroni, said he hoped to share details of The Birdcage's grand opening celebration via social media by week's end.

"It's the combination of a bar, nightclub and lounge," Imaroni said.

Imaroni and his business partners have spent the past two and a half months remodeling the space formerly occupied by Shooters at the corner of Race and Court Streets.

Shooters, a well-known gay bar, closed three years ago after its owner died, according to Guy Ulam, the general manager of The Birdcage.

"Basically, I want a safe place for the LGBTQ community to come and feel comfortable," Ulam said of The Birdcage.

Imaroni physically enshrined some of Shooters' history during his remodeling of the space.

For example, he said he decided to not strip away the scuff marks left by Shooters' pool table legs as he refinished The Birdcage's hardwood floors.

People will be able to see those scuff marks as they sit in the plush couch and chairs that line The Birdcage's lounge. That lounge is located in the same area behind the same bar where bartenders served drinks at Shooters.

"We left some of the scars," Imaroni said. "We wanted to show the history of the place; of bringing an old place back to life."

The lounge though is one example of how Imaroni also built upon the building's history.

Those windows offer a view of the bar, which Imaroni partially resurfaced with tin ceiling tiles salvaged from another building project. At night that tin will reflect the soft transition of colors from new LED strands lining it.

From the outside, people will also see hanging lamps and barstools similar to those found in the other bars and restaurants Imaroni co-owns. Those places include The Butcher and Barrel, Ché, O’Malley’s in the Alley, The Blind Pig, Gypsy’s Mainstrasse, and Coffee at Lola’s.

"We try to keep the same theme," Imaroni said.

It will also be hard to miss The Birdcage's multiple disco balls, deejay booth and the flat-screen televisions, which will play videos synced to dance music. The centerpiece of the dance floor is a small stage and pole equipped with a fog machine that Imaroni installed.

"We are going to have drag queen nights on Friday and Saturday," Ulam said.

The Birdcage will serve tropical and bird-themed cocktails as colorful as its dance floor, he added.

Drinks on the bar's menu will feature candy garnishes supplied by nearby Peter Minges & Son Confectionary. Minges, located at 138 W Court St, is the oldest candy store in the Queen City.

The menu will also feature drinks made with fresh juices, "mocktails" for those who don't drink alcohol and Sunday brunch specials.

The Birdcage will be open 4 p.m.-2:30 a.m. Tuesday-Sunday and will be available for private events on Mondays. For more information about the club visit thebirdcagecincinnati.com .