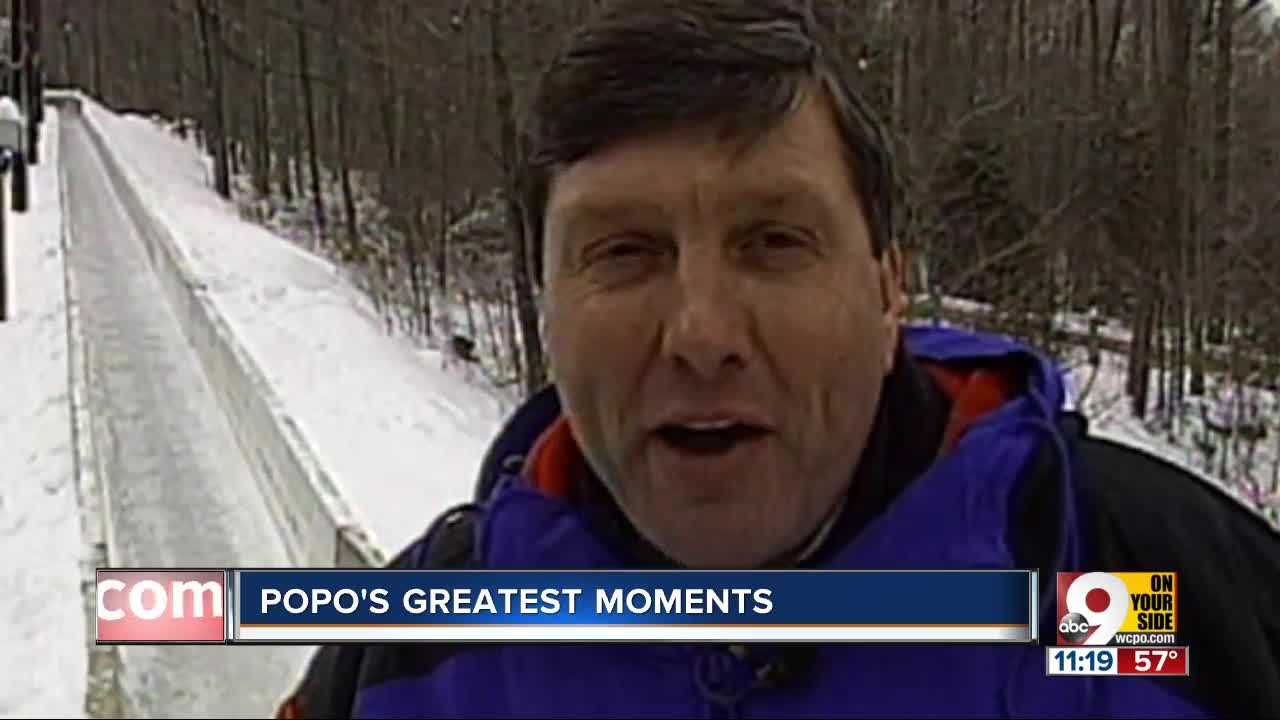 CINCINNATI — Over four decades with WCPO, John Popovich has been part of a lot of memorable stories and moments.

"They offered me the ride of a lifetime," Popo said, and what a ride it was!

Here’s Popo riding down a bobsled course in Lake Placid, New York, with his career full of twists and turns.

Popo wanted to bring the action to you, but when he tried to ride a unicycle, it was surprising that he didn't break a hip.

"My journey on the unicycle turned into a wipeout," he said.

Popo has been there for some of Cincinnati's greatest memories. When everyone focused on the field during Pete Rose's record 4,192nd hit, Popo turned the camera and captured something memorable.

"The moment was overwhelming,” Popo reported. “Pete's brother, David, put his arms around his mother. They embraced and cried for the next several minutes."

Bobby Plump recreates the Miracle of Milan for John Popovich

For 40 years, Popo brought out the best in everyone. Like Bobby Plump of The Miracle of Milan fame.

"I gave a fake left. Went right. Went up, and it went in," Plump said of his game-winning shot for the state title.

When Popo asked Plump to recreate it, it was nothing but net.

"Honest,” said Popo, “he did that on his first and only try."

From young athletes to the youngest at heart, Popo covered every story with compassion.

A memorable one was Boomer Esiason's son, Gunnar, diagnosed with Cystic Fibrosis. Popo spent a day in New York to bring his story to light.

"It's easy to see this is a favorite spot for Gunnar and his dad to come. They set it up together. They run the railroad together. When they had a wreck. They put it all back together, together."

The better question for Popo was what didn't he do?

We saw him throw out the first pitch at a Reds game. It had more movement than a Luis Castillo curveball.

When he reported live from the sideline, even the stars wanted to be around him. Here's former Bengal star Chad Johnson photo bombing a live report.

Popo held down the anchor desk with grace. And when it came to Sunday nights, there was one thing you could always count on.

"9 Sports presents ‘Sports Of All Sorts.'"

We always got Popo's best. Nobody did it better.

You could always count on memorable moments on the phone with callers.

"Don't make me laugh. All right. More in a bit. Jim in Trenton is up."

For 33 years on SOAS, Popo connected the Tri-State to their favorite athletes. He gave them a voice.

"Thanks for staying up with us. I hope your week is a winner," he would say.

What words do you say to a guy who has meant so much to so many?

I can think of two: Thank you.