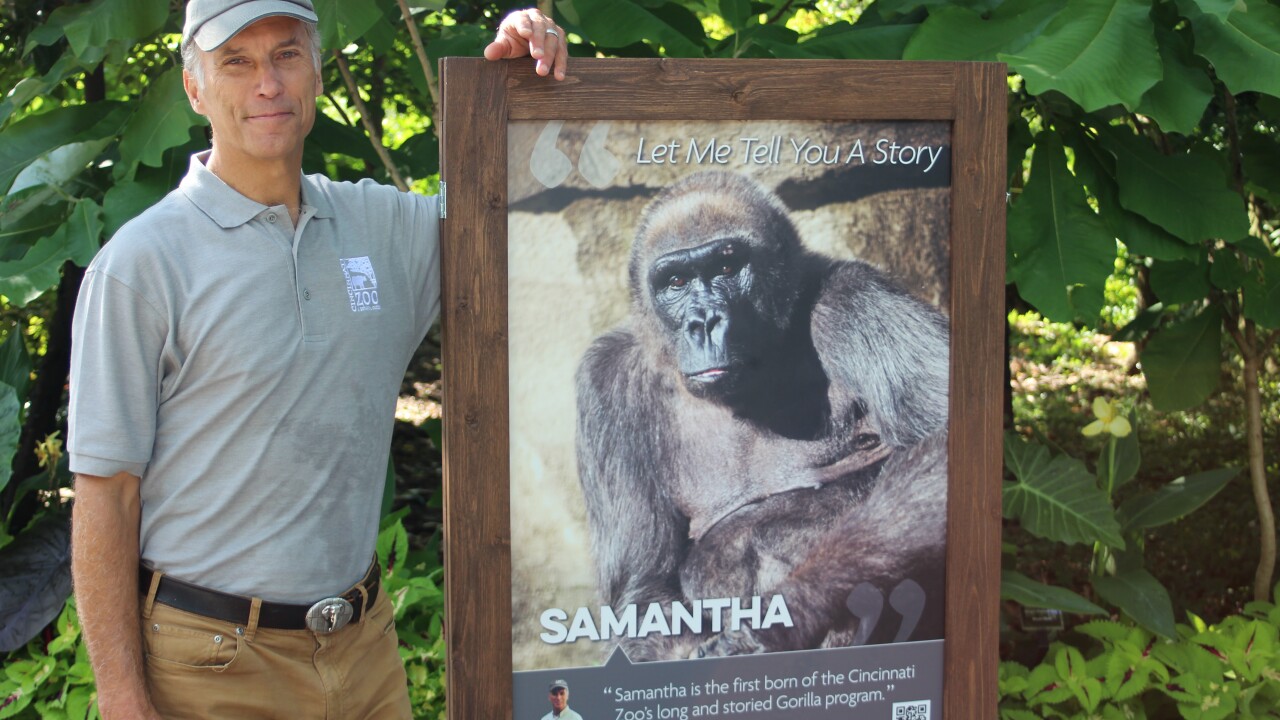 Photo by Christine Charlson for WCPO
Cincinnati Zoo director Thane Maynard says Samantha is one of the only residents there longer than him.

CINCINNATI — UNESCO put the world “on notice” in May, declaring 1 million species will face extinction within decades due to human impact on biodiversity.

Wildlife advocate Kathleen Maynard, who is also the wife of Cincinnati Zoo & Botanical Garden director Thane Maynard, said she found herself lying on the floor, devastated by the news.

Despite tireless efforts by conservationists around the globe, the numbers were going in the wrong direction, she said.

“So after crying and lying here, a couple of things radiated and I kind of leapt at Thane when he walked through the door, mostly to save my breaking heart,” she said. “I told him, 'We have to do something. We can’t speak to a million, but we can speak to one, and you specifically, Thane, can intimately speak to one.'”

That realization inspired “Let Me Tell You a Story,” a photo exhibit and story safari featuring Thane Maynard telling personal stories about 10 zoo animals that have touched his life and inspired countless others. Zoo visitors can find 5-foot-tall photos throughout the zoo featuring QR codes allowing guests to scan and listen to his stories, with more in-depth interviews with zookeepers online. The exhibit runs through Oct. 26.

Maynard said his hopes for the exhibit are twofold. First, he wants to inspire guests to take action to turn the tide toward preservation. He said Daphne the manatee, Sam the bald eagle and Cruncher the alligator all represent species that were once endangered in the wild and made an amazing comeback thanks to preservation efforts.

People can become a catalyst for change by supporting the nature conservancy and other various zoo conservation programs, he said, planting pollinator gardens or cleaning up the Ohio, Kentucky and Indiana waterways, as well as other habitats.

“One step at a time, you’ll end up suddenly finding yourself real involved,” he said. “And that’s what it’s going to take, to do things smarter.”

Secondly, Maynard said years ago his mentor Jane Goodall fought and inevitably changed the way all animals are perceived as individuals with unique traits and personalities. Before a crowd of skeptical Cambridge and Oxford professors at a London academy, he said Goodall stood her ground and single-handedly changed the way animals are studied.

He said the zoo exhibit pays homage to Goodall's legacy by recognizing 10 amazing animals, their individual achievements and contributions as ambassadors for their species.

“So all of our animals have stories of their life, this crazy trail to where they are today, what they are and why,” he said. “That’s the sort of long background on what’s behind this, to try to engage people where they are and get them to care.”

When choosing a photographer, Kathleen Maynard said they turned to longtime friend and well-known Cincinnati photojournalist Robert Flischel. Ironically, the photographer said just weeks prior he had captured the quintessential photo of Fiona emerging from her pool with a rainbow across her face. He said for the other nine photos, Kathleen told him he needed to capture the soul stare — that moment the animal looks into your eyes with undivided attention.

“The goal was to get a direct meaningful connection between the photographer and the animal,” he said. “And we did this by having the delightful keeper stand right next to me. There is an absolute, immediate recognition and connection between the two because they’re soulmates.You don’t realize that until you see it in real life.”

Flischel said photo projects with animals generally take months to complete, but this one took only seven weeks from beginning to end. He said all their subjects willingly cooperated except for Tommy T the cheetah; his photo took thousands of frames and multiple visits to capture.

“If you have a cat — and we do — there is zero difference between Tommy the cheetah and your adorable cat when getting the speed required to capture an important moment in that cat’s behavior,” he said.

After spending the past 40 years getting to know so many animals, Kathleen Maynard said this project allowed her to give back to them.

“I love those animals so much, and they have meant so much to our family. So I got to look into their eyes and tell them thank you, and I think they knew,” she said.

Thane Maynard said the idea of conservation has become a polarizing political agenda during the last decade, but he thinks protecting the environment isn’t a right or left issue but everyone’s issue. The zoo director said he sometimes gets criticized for his unflappable optimism, but he truly believes people will inevitably come around.

“There are so many success stories; nature is resilient if you give her a break,” he said. “I still have hope people will figure that out.”