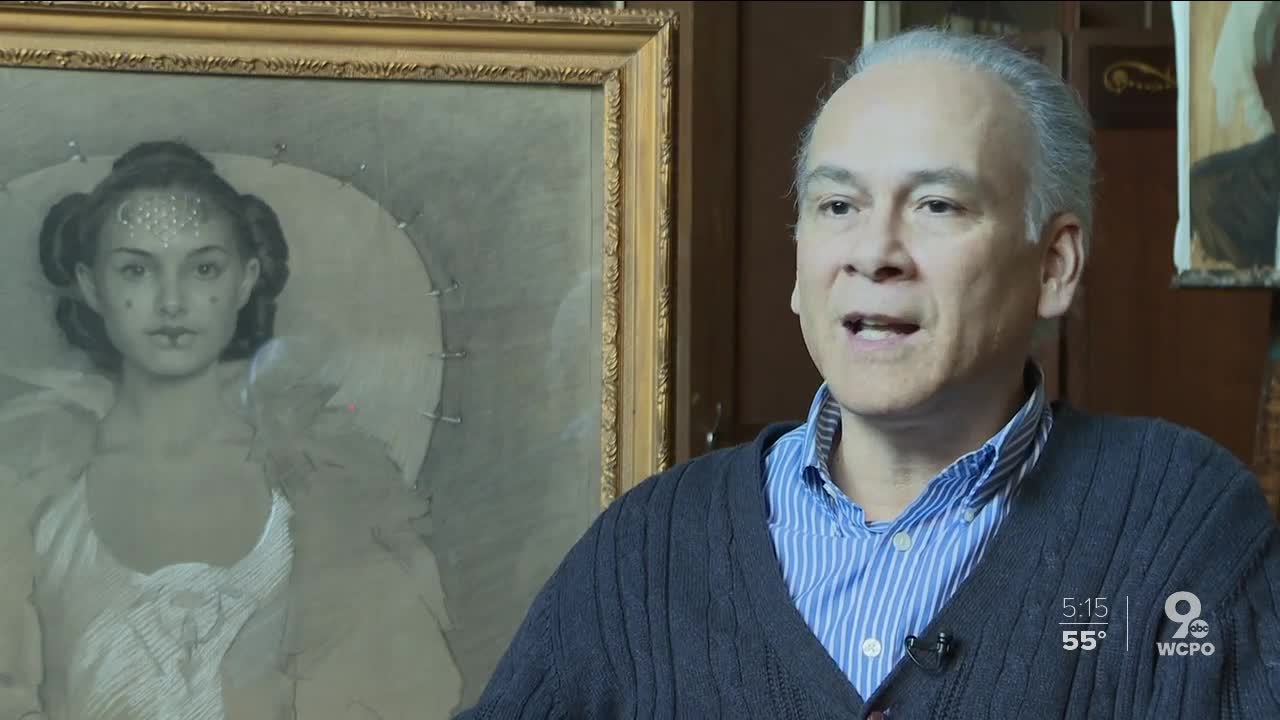 Carl Samson has made a decades-long career painting portraits of some of Cincinnati’s most prominent citizens. Some of those portraits have even appeared in Hollywood movies.

CINCINNATI — Carl Samson has made a decades-long career painting portraits of some of Cincinnati’s most prominent citizens.

Some of those portraits have even appeared in Hollywood movies.

“The painting that appears in 'Dark Waters,' the movie that’s out now in theaters, is a painting I did of J. Mack Swigert, who was 98 years old when he posed in my studio,” Samson said.

Swigert was an attorney at Taft Law, the Cincinnati firm at the center of the true story “Dark Waters” is based on. He died in 2011 at the age of 103.

Although Swigert is just one of the many Cincinnati leaders to be captured by Samson’s brush, it's a portrait of a queen who never existed that ensured the painter, and a bit of Cincinnati history, a place among the stars.

Samson received an unexpected phone call in late January. Skywalker Ranch was on the other end.

The Lucasfilm employee who called Samson told him his "Star Wars" painting "Padmé Resplendent with Naboo Mandala" was now on display at the Ranch.

“He was calling specifically to learn how the piece was created, what the genesis of the piece was,” Samson said.

Samson then explained how he came to paint his portrait of actress Natalie Portman as Queen Padme Amidala that originally appeared in the 2010 pictorial book “Star Wars Art: Visions.”

“I had struck up a relationship with Richard Gandy, the owner of Gandy Gallery, a popular online art gallery,” Samson said. “Richard called one day and he was kind of cagey about it. He said, 'You know I got this call from somebody who represents a Hollywood director, who wouldn't say who it was, and he said they are wanting to do a series of paintings based on this series of movies that the director had done.'”

Gandy wanted to know if Samson was interested in the mysterious project.

The painter later learned the director was George Lucas. The project would be called “Star Wars Art: Visions.”

"We didn't know what would happen to it,” Samson said of the art he submitted. “He (George Lucas) didn't necessarily commit to buying it. The onus was really on me to come up with something interesting."

"That was too close to something another artist had done in New York," Samson said.

It was Samson’s wife who suggested the painter incorporate the prominent gold leaf in his second portrait submission, "Padmé Resplendent with Naboo Mandala."

"I thought, 'That's it, gold leaf,'" said Samson, who then drew further inspiration from 19th-century paintings of the Madonna. "I actually thought Queen Amidala is the mother of Luke Skywalker, so I thought she's kind of a Madonna figure in a way; sort of giving birth to this child that did so much in this 'Star Wars' series. And I thought, why not, instead of putting a halo, put the orbital planet, the orbital path of the planet Naboo, around her head instead of a halo?"

Samson even incorporated a piece of Cincinnati art history into his portrait: He found sheets of gold leaf that once belonged to famous Cincinnati artists Bessie and Herman Wessel.

"The gold leaf that I used for it, some of it was actually here in the Wessels’ attic,” said Samson, who works out of the Wessels' former art studio in Mount Adams.

That portrait, along with many other pieces from "Star Wars Art: Visions" had spent the past few years in Japan as part of a touring exhibition of the same name before arriving at Skywalker Ranch.

And the Ranch might not be the last place Lucas displays "Padmé Resplendent with Naboo Mandala."

“There is the possibility it will be part of the George Lucas Museum of Narrative Art, which Lucas is building in San Francisco,” Samson said.

For more information about Samson and his portfolio of paintings, visit www.carlsamson.com.