Bunbury Music Festival 2018: What to know before you go 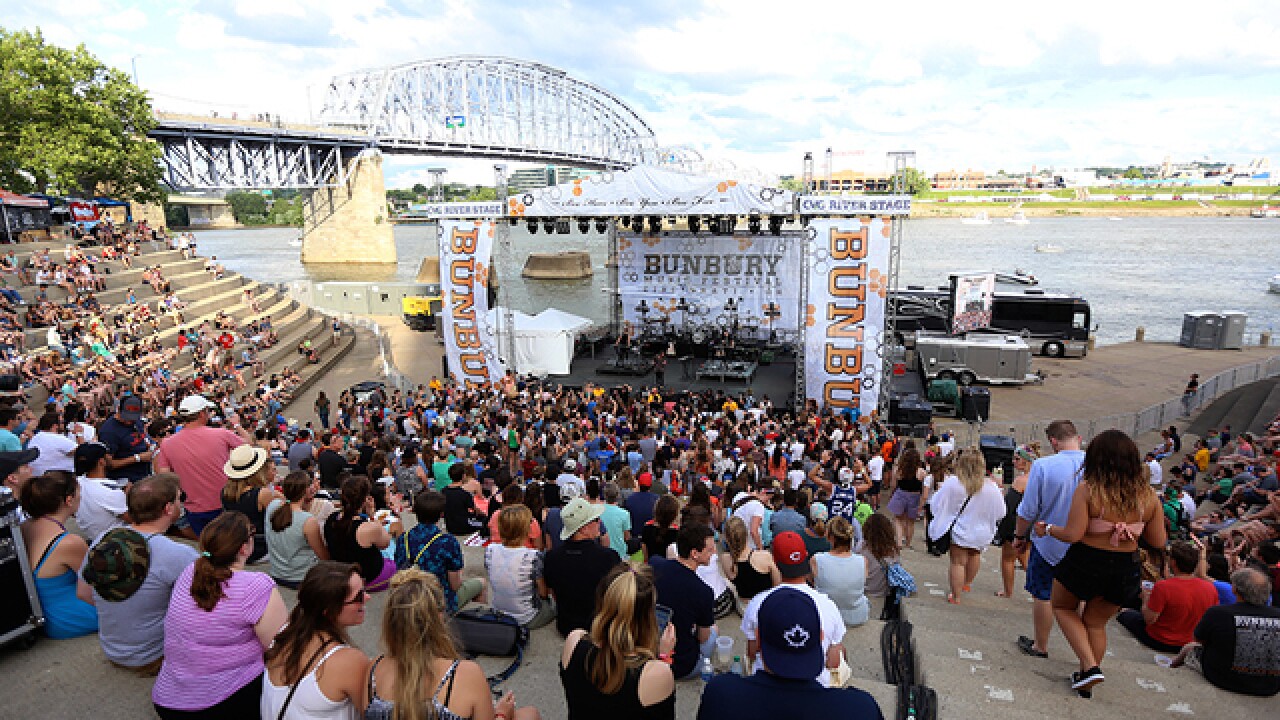 CINCINNATI – When Bunbury Music Festival organizer PromoWest announced this year's lineup in January, president and CEO Scott Stienecker said his company was excited to bring in performers both familiar and new.

“We are very excited about the lineup we’ve put together for 2018,” Stienecker said. “The caliber, strength and depth of this year’s festival is attributed, in large part, to the city of Cincinnati and its continued support to make this one of the premier boutique musical festivals in the country.”

Bunbury Music Festival will return for its seventh year to Yeatman’s Cove and Sawyer Point this weekend, with headliners Jack White, The Chainsmokers, Post Malone and Incubus. (Headliner Blink-182 announced Tuesday that they would have to reschedule.)

The first act will take the stage at 1:30 p.m. Friday. Here's what else you need to know before you go.

Many of the venue elements remain the same as last year's Bunbury, with one exception.

Lyft stations: Ride-sharing service Lyft is the official sponsor of this year's festival. PromoWest has set up drop-off and pick-up locations for Lyft riders at the corner of East Pete Rose Way and Eggleston Avenue, and on the west side of the Sawyer Point building at 720 E. Pete Rose Way.

The Acoustic Sound Stage: After buying Bunbury from founder Bill Donabedian in 2014, PromoWest reduced the number of festival stages from four to three, eliminating a small acoustic venue in Sawyer Point. That stage returned last year and will return again this weekend. About four local musicians will perform on it daily. The stage will be located near the Braxton Brewing Craft Beer Village.

Braxton Brewing Craft Beer Village: The Covington brewery returns for its second year as the main sponsor of the craft beer village, which will be located near the Purple People Bridge. Other participating breweries include Fifty West, Sun King, West Sixth, Lagunitas, Blue Moon, Leinenkugel's and New Belgium.

Buzz: Braxton and PromoWest's collaborative beer, Buzz, will return, too. Braxton's honey-and-peach-infused light beer will be on tap at Bunbury and is currently available in cans at local Kroger stores for a limited time.

Paper tickets and cash: PromoWest will continue using paper tickets, admission wristbands and direct cash purchases from vendors on-site this year. There will be plenty of ATMs on site. For those picking up tickets on-site, Bunbury's box office is located in the Sawyer Point parking lot at 705 E. Pete Rose Way. Box office hours are 11 a.m.-10 p.m. Friday and Saturday and noon-10 p.m. Sunday.

The stages: The festival’s main three stages will be pretty much in the same places as last year. Those stages will be located near the Southgate-Taylor Bridge in Yeatman's Cove, along the Serpentine Wall on the Ohio River and on the main lawn just behind the entrance to Sawyer Point near the I-71 bridge. The entrances again will be located near the Southgate-Taylor Bridge and the main entrance to Sawyer Point just past the Purple People Bridge. VIP seating also will be in the same places (near the main stages at Yeatman's Cove and Sawyer Point).

Tips for enjoying the festival

Show up early: Even with two entry points, it is still worth arriving earlier than planned. Gates open at noon Friday and Saturday and 1 p.m. Sunday.

Map your day: Use the music schedule Bunbury released in advance to plan which acts you absolutely have to see. Check the full schedule here.

Watch the weather: Dress accordingly. Wear sunblock and bring bug spray. You also might want to pack a poncho in case of rain; umbrellas are prohibited.

Plant a flag: OK, not really, but plan times and meet-up spots with friends in case your group gets separated or wants to see different performances.

Reserve parking: Parking spots can be reserved through Spot Hero.

Rent a locker: If you're planning to stay the full day at Bunbury, it might be wise to rent a locker once you go through the entrance gate. Bonus: Each locker doubles as a cellphone charging station.

Re-entry: Unless you bought a three-day pass, plan to stay at the venue the entire day. Organizers will not let single-day general admission ticket holders leave and re-enter.

What can you bring?

What can't you bring?