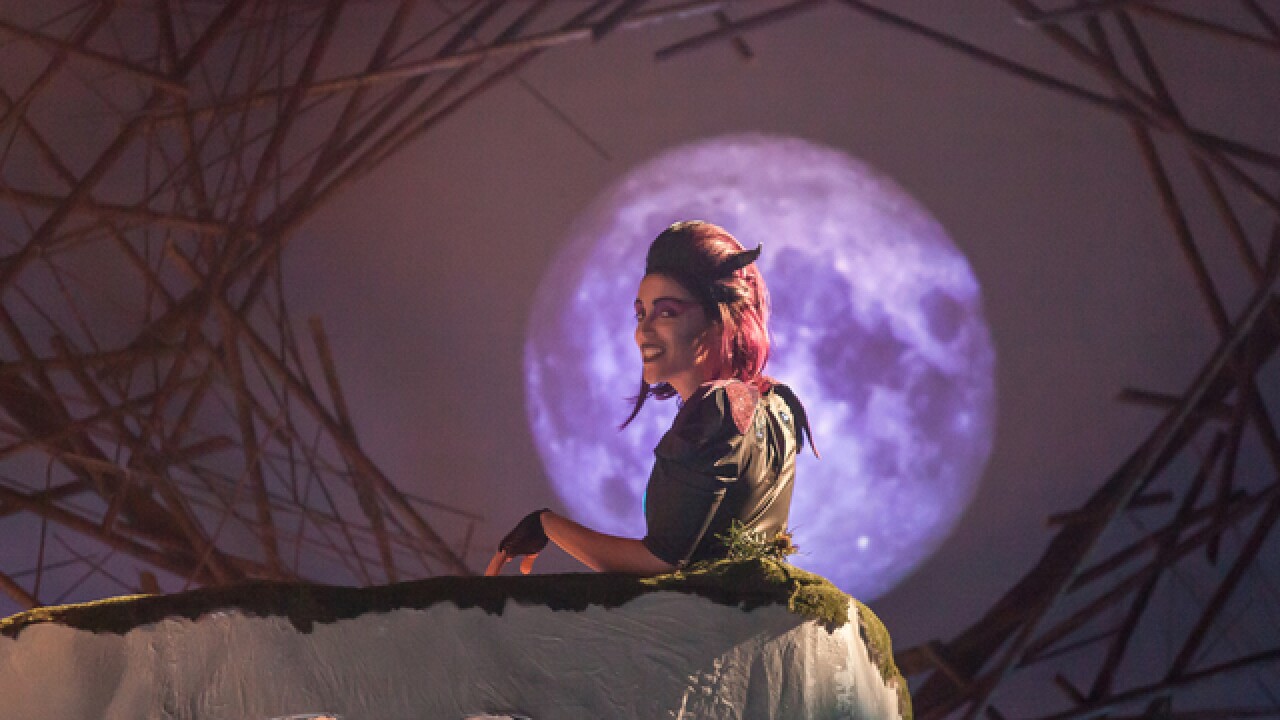 CINCINNATI -- Even if the show weren't funny (it is, very) and even if the Otto M. Budig Theater weren't beautiful and comfortable (it is, very), it would be hard not to have a good time at “A Midsummer Night's Dream,” Cincinnati Shakespeare Company's first production in its new home.

Everyone involved is just having so much fun. And everyone — cast, staff, crew, board members, anyone who has had anything to do with Cincinnati Shakespeare Company — is so proud and excited to show off the capabilities of and possibilities allowed by the new $17.5 million theater.

Possibilities like flying. Cincy Shakes' old home, a converted movie theater, never would have allowed aerial flights like the ones Puck (Sara Clark) and two other fairies make.

“This is still awesome!” shouted Clark, during her second or third flight of the show.

Director Brian Isaac Phillips, Cincinnati Shakespeare Company's producing artistic director, clearly put thought into using the new space for maximum effect. Fairies and lovers run and tumble up and down a two-story, multi-level set. Lights flash different colors around the balcony level, where Oberon, the fairy king, often perches. And the play's fools run round and about the stage and the audience.

“Whew!” Snug (Billy Chace) hollered after one spirited chase. “This theater is bigger than the old one!”

Still, #ComeCloser is more than just a marketing tagline in the Otto M. Budig Theater on Elm Street. No seat in the house is farther than 20 feet from the stage, and this production drives that home. Flying fairies landed on aisle railings and twisted just feet above audience members. Dashing through the aisles and around the stage, actors had to take care not to trip over crossed legs in the front row.

And half the fun of every joke was watching the people sitting across the theater react. Laughter really is contagious.

Phillips' version of “Midsummer” uses and remixes bits of pop culture from the last 30 years. The fairies' glow-in-the-dark, sparkling costumes and the bell-like music that accompanies their magic are reminiscent of “Labyrinth.” Our heroines, Hermia (Courtney Lucien) and Helena (Caitlin McWethy), blunder their way into a WWF-style fighting match. While McWethy wrings laughs out of her lovesick desperation for Demetrius, Lucien hilariously hulks out to fight for Lysander, putting new meaning to the famous line, “Though she be but little, she is fierce!”

Meanwhile, Chris Farley and Will Ferrell would fit right in with the slapstick physical comedy and slightly dirty jokes of the Mechanicals, the working men putting on the play within the play. Two of them, Nick Bottom (Matthew Lewis Johnson) and Snug, have a Jay and Silent Bob vibe going. (Snuggles! It's the new snootchie bootchies!) The Mechanicals' perpetually put-upon director, Phoebe Quince (Kelly Mengelkoch), is totally going to Halloween as Barb from “Stranger Things;” she'd barely need a costume change.

Intermission at the old Race Street theater was a crush of people rushing through cramped bathrooms. The new theater's spacious lobby and ample restrooms fix that.

Lined with windows, the lobby looks out on Washington Park, and inside, people chatted and milled about under star-like lights glittering from the ceiling. A multi-sided bar provides plenty of access for everyone.

“Midsummer” runs through Sept. 30. Cincinnati Shakespeare Company marketing director Jeanna Vella has said they will find a way to get anyone who really wants to see a show into the theater, which has standing room on the balcony level.

Next up in the debut season at the Otto M. Budig Theater is “Dracula,” which runs Oct. 13 through Nov. 4. Expect more flying in that one.