For the holidays, NKY family wants every Cincinnati Children's patient to have a Brave Gown 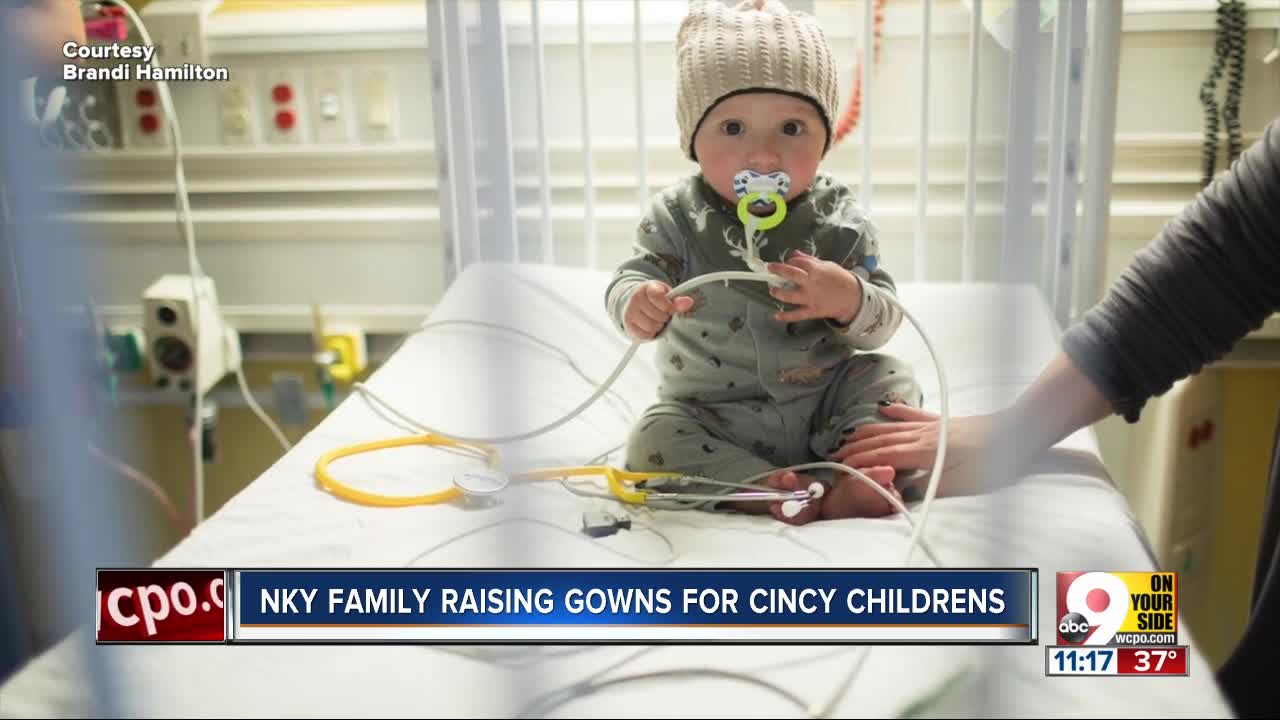 Two-year-old Nash Hamilton, a survivor of pediatric cancer, won't wear anything but his Brave Gown when he goes back to Children's Hospital for tests and checkups. It's a hospital gown that doubles as a superhero costume, and it helps him stay strong on scary days. His parents hope to donate 500 more gowns to other patients at Children's Hospital by Christmas. 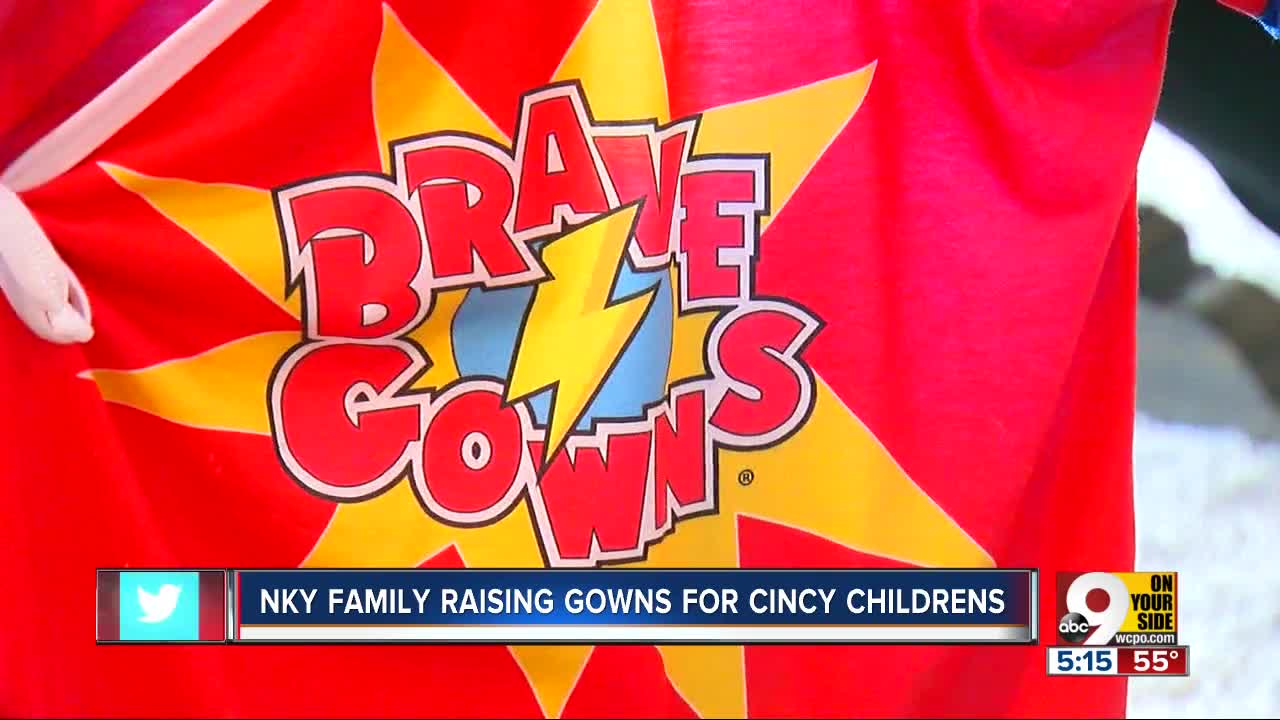 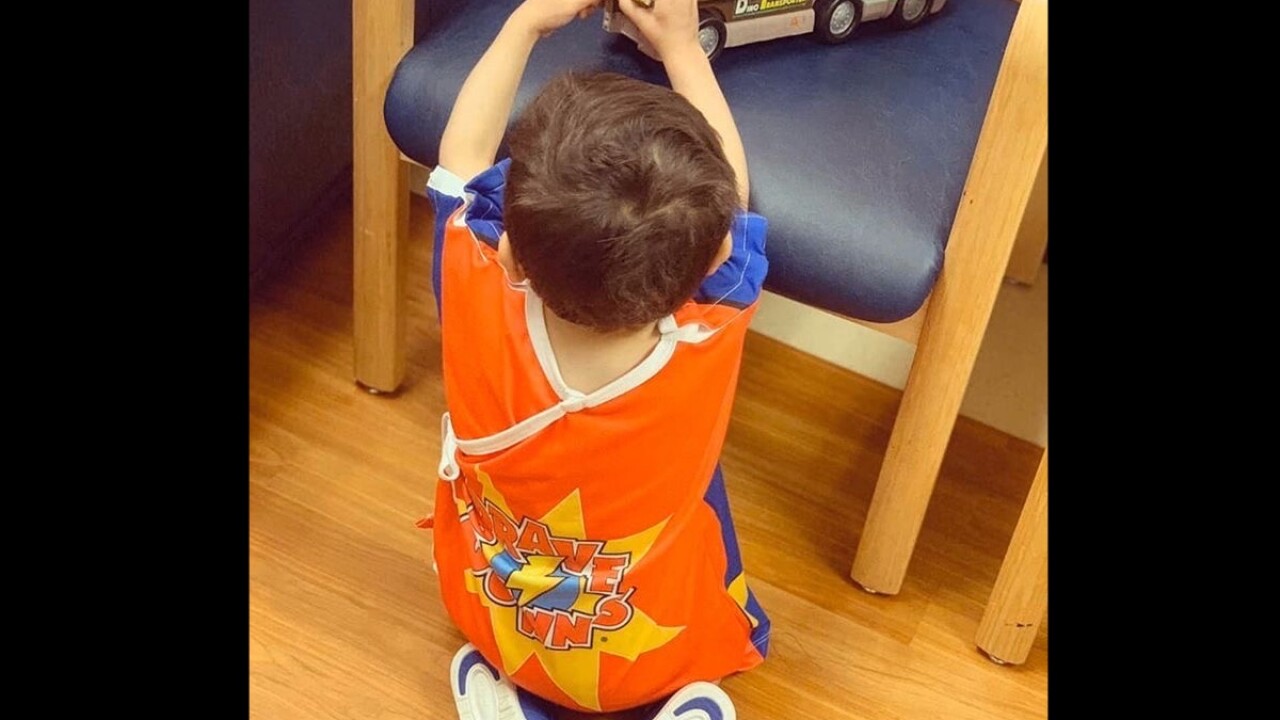 HEBRON, Ky. — He’s not old enough to vocalize it. Or probably even understand it. But 2-year-old Nash Hamilton has a lot to be thankful for this holiday season.

This will be his first Christmas at home, able to be around extended family and friends - not isolated because of his health.

Nash’s parents, Brandi and Jeremy, are on a mission to make every child spending the holidays at Cincinnati Children’s Hospital Medical Center comfortable in a hospital gown that doubles as a costume.

It’s called a Brave Gown , and it's about the only thing Nash will wear on each trip back to the hospital for a test or scan.

The Hamiltons want to provide 500 gowns to Cincinnati Children’s by Dec. 7.

He greets us with a loud “rawr” when we meet at his parents’ Hebron home, crouched down with arms folded into Tyrannosaurus Rex claws. Then he runs off to play with his T. Rex toy and some trucks.

There was a time, though, when mom Brandi says she wasn’t sure he’d make it to his first birthday.

"I would just hold him at night and have this feeling like something's the matter,” Hamilton told WCPO.

When he was 3 months old, he wasn’t sleeping well. Nash would cry after feeding and he had a distended belly with an umbilical hernia. Doctors told Hamilton there wasn’t anything to worry about.

On a visit to the pediatrician for a stomach bug and diaper rash, the doctor felt a mass in Nash’s abdomen.

It was the first day of summer vacation. Hamilton had her oldest, Peyton, with her, but they were off to Cincinnati Children’s for tests.

"I cried for five seconds at the first stoplight and then I said, 'We're going to do this. I'm going to be strong for my family,’” Hamilton remembered.

The diagnosis was stage four neuroblastoma.

What followed was one year of chemotherapy, immunotherapy, scans and tests. Nash would spend much of his first year on Earth in a hospital bed.

"We ended up not leaving the hospital for eight weeks that day,” Hamilton said. "We went in; I still had food in the crockpot [at home].”

"Kids are stuck in the hospital. They can't play dress-up because of their tubes and monitors and wires and ports and lines and stuff,” said Hamilton. "So this incorporates play into their treatment in a fun way, but very practical. They're hospital safe, they're hospital approved."

Late in Nash’s treatment, his mom saw Brave Gowns on social media. And everything changed.

"It helps Nash in a way that is just unexplainable. It calms him; it makes him feel like nothing bad is about to happen,” Hamilton said. "It's just like he has a t-shirt on.”

It makes a difference. Hamilton remembers an MRI about one year ago.

Given a regular hospital gown, Nash had what his mom called a hysterical meltdown.

"I kept explaining it's the gown and finally they allowed that and instantly he calmed down. When the staff came back in to check on him, they were like 'Oh my gosh,’” Hamilton told WCPO. "It had that much impact. And he played. I have pictures of him just playing on the floor after that."

There are dozens of designs ranging from unicorns to rock stars, police officers to princesses. Nash’s favorite right now is a superhero.

Brave Gowns are 100% polyester, designed with snaps on the shoulders and double ties. There is an extra panel for coverage on the back.

Brave Gowns creator Summer Germann writes on her website that the gowns were created with input from the transplant team at Chicago’s Lurie Children’s Hospital.

To celebrate Nash’s first birthday, his family held a circus-themed Nash Bash and raised $8,000 and close to 100 handmade fleece blankets for Cincinnati Children’s, according to his mom.

Now Nash is two years post-chemotherapy, but his road ahead remains a challenge.

Nash will needs scans and tests regularly the rest of his life.

"A lot of the sensory issues that Nash has now and some of his anxiety and PTSD could have been prevented if we had known about Brave Gowns sooner,” Hamilton said.

You can help, by sending a Brave Gown to Cincinnati Children’s Hospital Medical Center through the website .