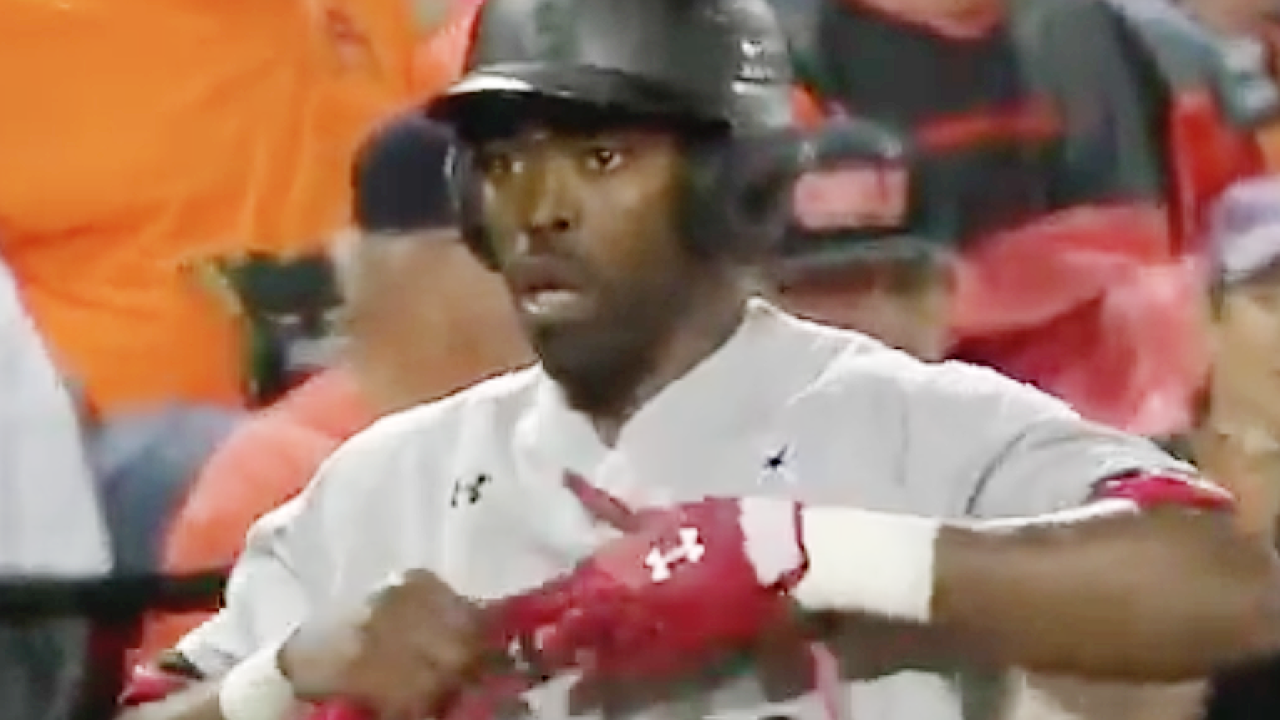 UC&#39;s A.J.Bumpass removes his gloves while standing on third base after his ninth-inning, tie-breaking triple against Oregon State in the NCAA Tournament on May 31, 2019.

Following coach Scott Googins' pre-tournament mantra, the underdog University of Cincinnati baseball team went into the school's first NCAA tournament in 45 years with a chip on its shoulder and shocked defending national champion Oregon State, 7-6, in a first-round game on its home field Friday night.

Right fielder A.J. Bumpass capped a 5-for-5 night with a tie-breaking, ninth-inning triple, and UC came away with a stunning upset that gave Googins' his 400th career win and put the Bearcats in the driver's seat in the four-team, double-elimination regional.

“We knew what OSU was. I think what keeps us successful is we were playing fearless,” Bumpass said after leading UC's 15-hit attack. “We know what we’re capable of and we were not backing down.”

UC, the No. 4 seed in Corvallis, plays No. 3 Michigan at 10 p.m. ET Saturday after the Wolverines beat No. 2 Creighton 6-0 on Friday. Oregon State faces Creighton at 4 p.m. ET. If the Bearcats can beat Michigan, they'll only need one more win to advance to the super regional round.

“It says a lot,” Bumpass said of bouncing back. “It says we have grit, we’re resilient, we play until the last out.”

Googins went to an unusual strategy during that OSU rally. With the bases loaded and no outs, the UC coach ordered an intentional walk to catcher Adley Rutschman, the likely No. 1 pick in the upcoming MLB draft, in an attempt to prevent a big inning.

Googins said he and his coaches had gone over the scenario during the week.

“My assistants tried to talk me out of it. I said, 'No, we talked about that when the pressure wasn’t on,’” Googins said. "We were not going to get beat by the best player in the nation.”

But the Bearcats came right back in the eighth to tie it with the help of a bang-bang play at first. Replacement catcher Mason DeAnna was hit by a pitch to start the inning and went to second on center fielder Jeremy Johnson's sacrifice bunt. Third baseman Eric Santiago reached safely on an infield error and shortstop Joey Bellini hit what could have been an inning-ending double-play grounder. But Bellini beat the throw to first, allowing DeAnna to score the tying run.

Second baseman Jace Mercer, who went 3-for-4, led off the UC ninth by dropping a soft single into left center, and Bumpass scored him with a smash off the center field wall.

The UC bullpen then did what it couldn't do in the seventh - protect the lead. Korren Thompson put the Beavers down 1-2-3 on three straight fly outs for his 13th save.

UC took a 1-0 lead in the second after left fielder Joey Wiemer's high pop-up dropped in the middle of three Oregon State fielders for a double. After Mercer walked, Bumpass lined an RBI single to right.

The Bearcats got five straight hits in the third to make it 3-0. Bellini and designated hitter Wyatt Stapp doubled, though Bellini was thrown out at home. Wiemer doubled in Stapp, and Mercer and Bumpass followed with RBI singles.

OSU right fielder Tyler Malone hit his first homer of the season in the third and center fielder Kyler McMahan homered in the fifth to cut UC's lead to 3-2.

Bumpass started UC's two-run sixth inning with a homer, knocking OSU starter Bryce Fehmel out of the game after he gave up nine hits and four runs. Jeremy Johnson walked and Eric Santiago doubled off the center field fence.

In the seventh, Oregon State rallied for three runs off reliever A.J. Kullman with a hit batsman, two walks (one intentional) and three singles.

Nathan Moore got the final out of the seventh and pitched a 1-2-3 eighth to pick up the win. Jake Mulholland pitched the last 1 1/3 innings for OSU and took the loss.