The loophole in this law allows partners to drug, rape their spouse 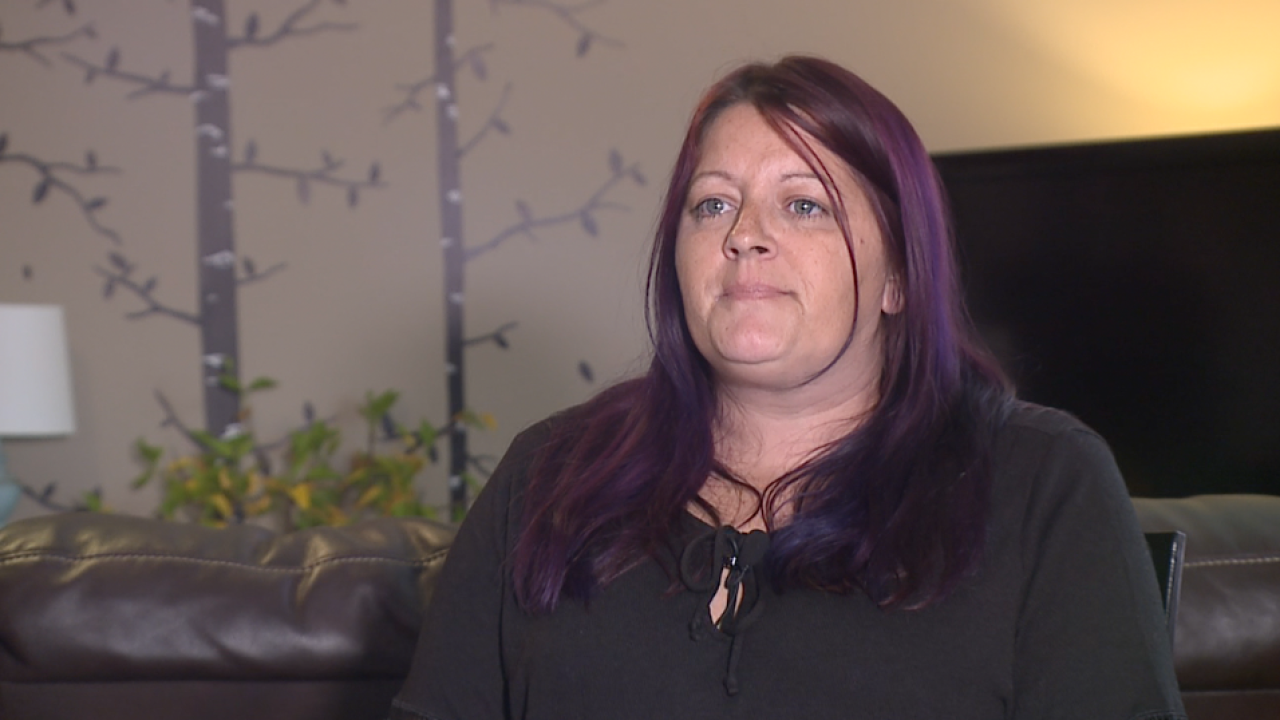 Copyright 2019 Scripps Media, Inc. All rights reserved. This material may not be published, broadcast, rewritten, or redistributed.
Mandy Lewis. 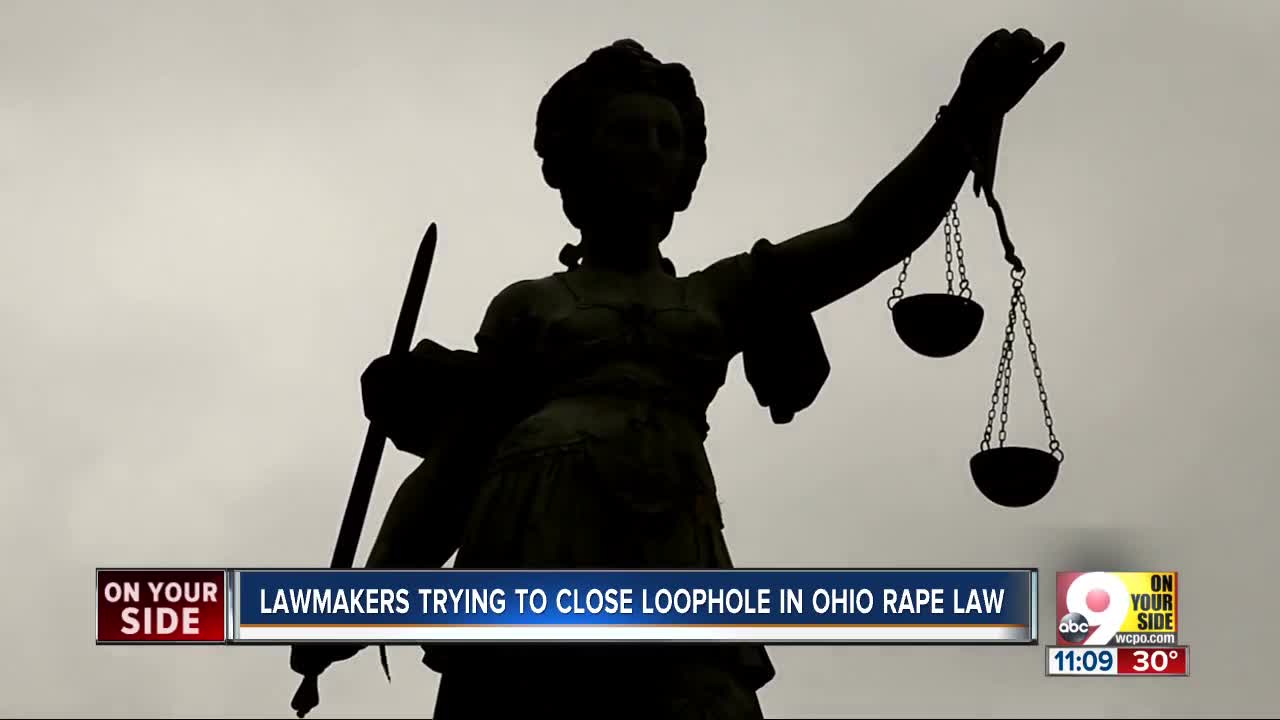 "I'd wake up with certain parts of my clothes not on when I knew I went to bed with them on,” she said. "I'd wake up with weird tastes in my mouth, different things would show up in my drinks.”

She said she wondered whether or not she was sleepwalking, or worse, making things up.

"Just a bunch of silly little things that would happen that eventually all added up and became a big thing.”

She noticed the drugs in her drink, sometimes in her mouth as she slept. Marion County, Indiana court records show the drugs were Xanax. Lewis said it progressed to include Ambien, a sleep aid.

She confronted her then-husband, David Wise.

"He would tell me that he thought I needed sleep so he would give me these drugs and administer to me at different times so that I could get more sleep,” she told WCPO.

Toward the end of 2008, Lewis said she found her husband’s cellphone at home. On it, she also found videos.

A woman who was unconscious, being sexually assaulted.

"It was really confusing seeing myself in that position on these videos,” she told WCPO. "I didn't remember any of it, I remembered none of it.”

Lewis started the divorce process, but told investigators she wanted to keep her two children’s father in their lives. She said she was scared people wouldn’t believe her.

"This was the man I was going to spend the rest of my life with,” she said. "He loved me and I loved him and why would he do anything to harm me?"

She didn’t take the videos to Indianapolis Metro police until 2011.

David Wise was charged with rape and criminal deviant conduct. It took until 2014 for his case to go to trial. He was convicted on all counts.

The case made international headlines because of Wise’s sentence. Twelve years of a 20 year prison sentence were suspended, followed by eight years of home detention. He wouldn’t serve prison time until he violated his home detention one month later.

"I was lucky, I had videos,” Lewis said. "I had letters. He confessed to another person. I was lucky. there are a lot of women and men who come forward and don't have videos and don't have hard evidence, hard proof that something happened to them so they're basically shamed and scared to come forward.”

But, if Lewis were in another state, the case might not have even gone that far.

The origins of the so-called marital rape exemption -- or spousal exemption -- date back to the 17th century. The law remains on Ohio books despite multiple efforts to get rid of it. Now some lawmakers, advocates and survivors say it is hurting rape victims in the state.

The exemption received renewed attention in the era of #MeToo. But some Ohio lawmakers have been trying to close the legal loophole for nearly five years -- without success.

"It really blows my mind that it's still on any books anywhere,” Lewis said. "Why have they not changed it? Why is it still there? Why are they allowing this stuff to happen?"

In the 133rd General Assembly, her successor, Rep. Tavia Galonski, is a joint sponsor on a similar bill.

House Bill 279 would close the exemption and end the statute of limitation on rape in Ohio.

It hasn’t been given a hearing date in the Criminal Justice committee yet.

"You would think that it wouldn't be the uphill battle that it has been,” Galonski, a Democrat from Summit County, told WCPO.

"There are, I believe, a few powerful legislators who are unsupportive of this issue,” Boggs said. "And because of that, we have never been able to get it across the finish line.”

In the Tri-State, Ohio and Kentucky still have loopholes. Indiana got rid of the marital rape exemption in 1998.

One former opponent of the bill, the Ohio Prosecuting Attorneys Association, had a change of heart a couple years ago.

Executive Director Lou Tobin told WCPO the organization has evolved on the issue and is likely to support it.

"In the past, I know that there's been some concern that these cases are difficult to prove; they can be a lot of he-said, she-said back and forth," Tobin said. "But sorting through those things is what prosecutors are for.”

WCPO asked the House Criminal Justice Committee Chair George Lang’s office about the bill and the possibility of a hearing. This news outlet was told bills were getting hearing dates as sponsors asked for them.

"I'm not aware of anyone who is in direct opposition, so that has a lot of weight,” Galonski said. “When you stand on the House floor and say 'I actually had no one opposing this, this is a law that the people of Ohio want us to move forward with.’"

A national challenge, too

All 50 states had laws making marital rape a crime by 1993, whether as a result of the two preceding decades of activism by women's rights groups or because of a pivotal court ruling. Nearly 9 percent of women and 0.8 percent of men have been raped by an intimate partner, according to the Centers for Disease Control and Prevention. National surveys have placed the percentage of women raped within marriage between 10 and 14 percent.

"We get over 11,000 calls on our hotline a year,” said Kristin Shrimplin, CEO of Women Helping Women. "Violence is normalized in our community, in our region. So it doesn't shock us when we hear these stories about what people are experiencing even within their marriage."

An effort to close the loophole failed in Maryland earlier this year.

During discussion of the bill, one skeptical male lawmaker wondered whether a spouse might be charged with sexual assault for "smacking the other's behind" during an argument. Maryland Del. Frank Conaway Jr., a Baltimore Democrat, raised religious concerns.

"If your religion believes if you're married, two are as one body, then what happens? Can you get a religious exemption?" he asked.

"No, I would actually say that the First Amendment would prevent the state from getting entangled in that sort of judgment," replied Lisae Jordan, executive director of the Maryland Coalition Against Sexual Assault. "So you would have to rely on your faith and your commitment to that to not bring those charges. But that's no place for the General Assembly."

The bill died in March.

A model for change

One state has recently voted to eliminate the exemptions.

It was after hearing emotional testimony from Jenny Telson, whose story of survival is similar to Lewis’s story.

The 39-year-old from Andover, Minnesota, was going through a divorce in 2017 when she discovered a flash drive with videos taken by her husband. They showed him penetrating her with an object while she lay drugged and unconscious. In one, their 4-year-old lay next to her on the bed.

The difference was, Minnesota still had the spousal exception.

Rape charges against Teeson’s husband were dropped to a gross misdemeanor of invasion of privacy. He served 30 days in jail.

"No longer will this antiquated and shameful law be on our books," Gov. Tim Walz said as he signed the bill into law in May. "The concept of a pre-existing relationship defense should have never been part of our criminal statutes.”

Like Teeson, Lewis hopes her voice will help change minds and laws.

"If I was that person and there was an exemption in Indiana when I went through this and they told me there's nothing I can do, I don't know where I'd be now,” Lewis said as our interview with her ended.

WCPO does not normally identify victims of sexual assault, but have identified Teeson and Lewis because they have both publicly shared their stories.

Lewis told WCPO she agreed to publicly sharing her story in hopes it reaches someone in her situation.