CINCINNATI -- The ghosts of brewers past are rising up in Over-the-Rhine as a new trio of brewers make their mark in the heart of the city.

Company president Bob Bonder and vice-president of marketing Bryant Goulding said the idea behind Rhinegeist started in 2007 when the pair was in San Francisco. At the time, Goulding was working on his own homebrew beers and Bonder was roasting coffees as the plans for a future coffee shop percolated.

While Goulding went on to work for several breweries in the coming years, Bonder brought his coffee to Cincinnati and opened up the Tazza Mia coffee house in 2008.

Fast forward to 2012 and after a couple visits and many talks, Bonder and Goulding decided to open up a brewery in the Queen City. 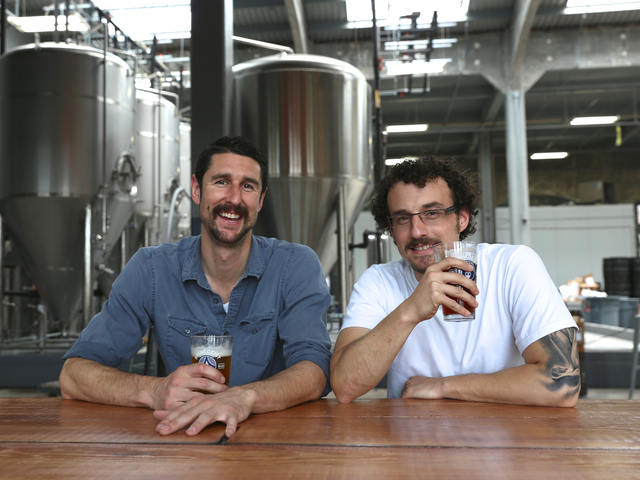 Once the pair finalized the plan, they went about trying to find funding for the project. Bonder and Goulding said they secured $1.2 million in private equity to get things in motion.

Goulding said after just his second visit to Cincinnati, he was sold on the idea of opening up the brewery in the old Christian Moerlein bottling facility on Elm Street.

The owners said they are proud to operate a business in the historic Over-the-Rhine neighborhood, which shows by the name they chose in Rhinegeist, meaning “ghost of the Rhine.”

After months of construction, Rhinegeist finally opened in early July on the second floor at 1910 Elm Street with 25,000 square feet of space to work with.

With the space leased and equipment on the way, Rhinegeist needed a head brewer and they turned a man already well known in the Cincinnati brewing scene.

They procured the services of Jim Matt, assistant brewer at the Christian Moerlein Lager House.

Before working for Christian Moerlein, Matt had been a chemist for 20 years and eventually transitioned to the beer industry at the Sun King Brewery in Indianapolis before moving to Cincinnati in the past few years.

Unlike some Cincinnati beers that are Germanic and malty in character; Rhinegeist serves “West Coast” style beers. Goulding said they are brewing with a variety of Pacific Northwest hops for a balance of intensity and drinkability.

“We’re looking at beers that people want to drink on a daily basis that have a lot of flavor to them,” Matt said.

Rhinegeist will feature British dark-mild style, a golden ale, a hoppy wheat pale ale and an India pale ale, as well as plenty of seasonal beers.

Goulding said Rhinegeist plans to mainly produce for the Cincinnati area and to self-distribute. They’ll even feature a refrigerated truck to get the beer to market.

To brew all the beer, Rhinegeist purchased a brewhouse facility from a brewery in Mexico. 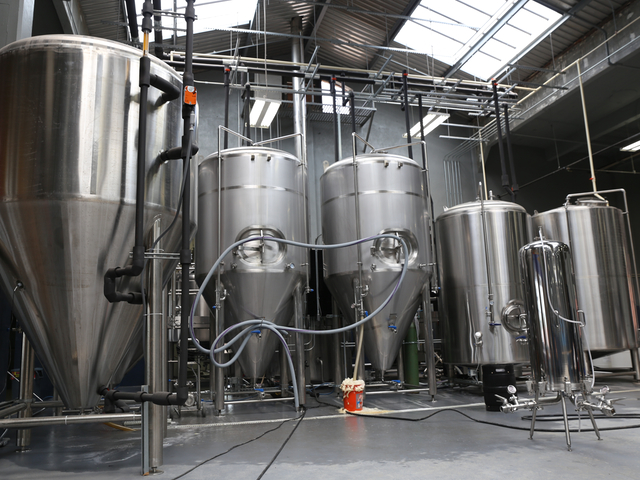 “We got a great deal on it and it’s a beefcake of a brewhouse,” Goulding said.

Rhinegeist won’t just be brewing into kegs though. While most craft brewers are using bottles, the company will only be using cans once production begins, even featuring 16-ounce sizes.

Goulding said the canning line will be up and running by Spring 2014, but it will be dictated by the demands of the draught production. He said they are focusing on keg sales first and will make sure they have enough beer to get to the bars that have been supporting them so that prospective customers come first.

The company said that by their grand opening, they had about 30 barrels of each of their four core beers ready and of that amount, almost half of the kegs had been pre-sold to bars and other customers.

Matt has put the brewhouse through its paces a few times now and the group said it is responding well, running without any unexpected problems.

Goulding and Bonder said the brewhouse they have is similar the one that Matt worked on at Sun King in Indianapolis and he was able to acclimate to it quickly.

The trio said of the great things they like about working in Cincinnati, it’s that there’s still such a great manufacturing base so just about any piece of equipment they need fabricated or worked on has been available and done right away.

The fact that they’re now open and producing beer is something that astounds the co-creators to this day.

“I still kind of giggle every day, the space itself is rather amazing. You get to see all this natural light and such while you’re in a working brewery. I’ve been in close to 100 breweries and the natural space and light in this building is uncanny and compelling. It’s like you can stare off into the horizon while staying in the building,” Goulding said.

The new brewers said they are trying to fill their production area and tap room with interesting items to represent the area and the history of the brewery district. In fact, the tap room tables were built with lumber that was just found abandoned at the warehouse when they moved in.

Bonder said it’s sometimes easy to forget the magnitude of the space while working in it but once a week he’ll walk in and just be struck by the enormity of it all.

One of the first things that patrons are struck by when they come into the brewery is a massive mural done by local artist Robin McCarroll in the style of Salvador Dali. Goulding said it was inspired by Dali’s work entitled “Dream inspired by the flight of a bee around a pomegranate a moment before awakening.” The trio said the mural represents different aspects of the brewery and the journey they’ve gone through to get to its opening.

The trio said they’ve been overjoyed by the response from everyone in the community.

“(The brewery has) been more embraced than I ever thought it would be. Everything else I’ve ever done, you sort of launch and you don’t have any idea of what those first few weeks are going to be like – we still have no idea what these weeks will be like – but what we know is that people are excited about it,” Bonder said. “Nothing has made me happier in my career in entrepreneurship than watching this grow and evolve.”

The brewers said they feel they are hitting that perfect moment of being in the right place at the right time. The local craft beer revolution is hitting full tilt and Rhinegeist has benefited from working with the new brewers at MadTree, 50 West, Blank Slate and more as they have opened up over the past year. 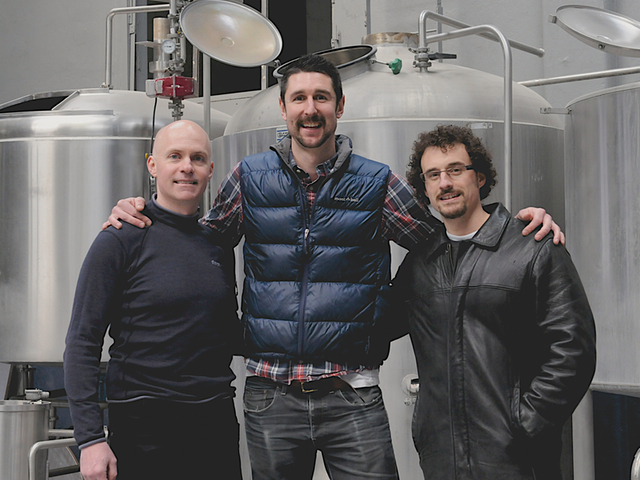 “Everyone is crazed about all the great beer that’s (being) brewed in Cincinnati right now. And with Jim’s reputation as a brewer, this is just fantastic. Ever since we mentioned that he is our head brewer everyone has stopped asking, ‘How do you know the beer is going to be good?’” Bryant said.

Goulding and Bonder also credit the work being done by the Over-the-Rhine Brewery District organization and by Greg Hardman at Christian Moerlein Brewing Company to bring the history of city to the fore.

“I think we’re lucky that we’re going to brew what we love and it just so happens that what we love is what other people want to be drinking as well,” Bonder said.

They can be found online at: http://rhinegeist.com/