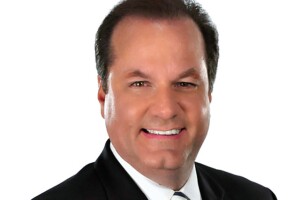 When did you start working here? July 2005

Where else have you worked?

Where did you go to college?

What are you most proud of when it comes to your work? I'm now entering my 35th year in meteorology covering everything from tornado outbreaks to major snow events. Perhaps, I'm most proud of our tornado coverage where we lead the Tri-State in accuracy and viewers. During the most recent outbreaks, our coverage was credited with saving lives something that means so much to us here.

In fact, I still bring in my "comfortable" air mattress frequently using it during severe weather seasons. One other note, I'm also proud of the Emmy Award for Best News Talent. It was an incredible year where I covered the strongest tornado ever recorded with winds of 308 mph in Oklahoma. Plus, I reported from a category 5 hurricane and life-threatening flooding.

What are you most proud of in your own life? I like to say that "I fooled one good woman into marrying me...so I'm not going to foul it up." I married the former Julie Leis on September 5, 1987 at Immaculata Church in Mt. Adams. Then, when it comes to our children, I couldn't be more proud of them! God blessed me with a wonderful family.

What do you love about living in the Tri-State? I live on the West Side of Cincinnati and the best part of the Tri-State is the family atmosphere. It's been the best place to raise our 4 children. I stay busy donating my time as a master of ceremonies for a number of charities. People say that they like when I emcee or as act as an auctioneer. In fact, I often work alongside my wife, Julie, who is a master "fun-raiser".

What are your favorite local hangouts/places, sports & cultural institutions? I love the Red, Bengals, and sports. But, we spend most of our free time with family. When it comes to golf, I consider myself more of a landscaper, but I like to donate my time to a number of charity golf tournaments every year.

All time favorites? I really love movies. Some of the best: The Godfather, Shawshank Redemption, Caddyshack and Swingers. I'm a huge music fan. I think, it's because I started as a disc jockey in college. My taste runs from Bruno Mars, Leon Bridges, Earth, Wind & Fire, Eagles, Huey Lewis, Keith Urban and Miles Davis.

What is your day like? You might call me a "second-shifter" because on most days I'm in by 2:30 p.m. and leave around midnight. However, as we all know, Mother Nature can call at anytime so it really depends on her. Ha!

Tell us more! Before WCPO 9, I spent nearly 20 years at KRON-TV in San Francisco as their Chief Meteorologist. I pioneered the country's first instant weather information access, the California Weather Network.

It was fun to broadcast live from a cruise ship steaming into the San Francisco Bay and broadcasting live from inside a plane with the nation's leading stunt pilot. (My stomach was left in another atmosphere.) Finally, I was the first person ever to broadcast weather from the top of the Golden Gate Bridge.