Sports Vault: In the early '90s, Bengals owner Mike Brown won a game of chicken and got his stadium 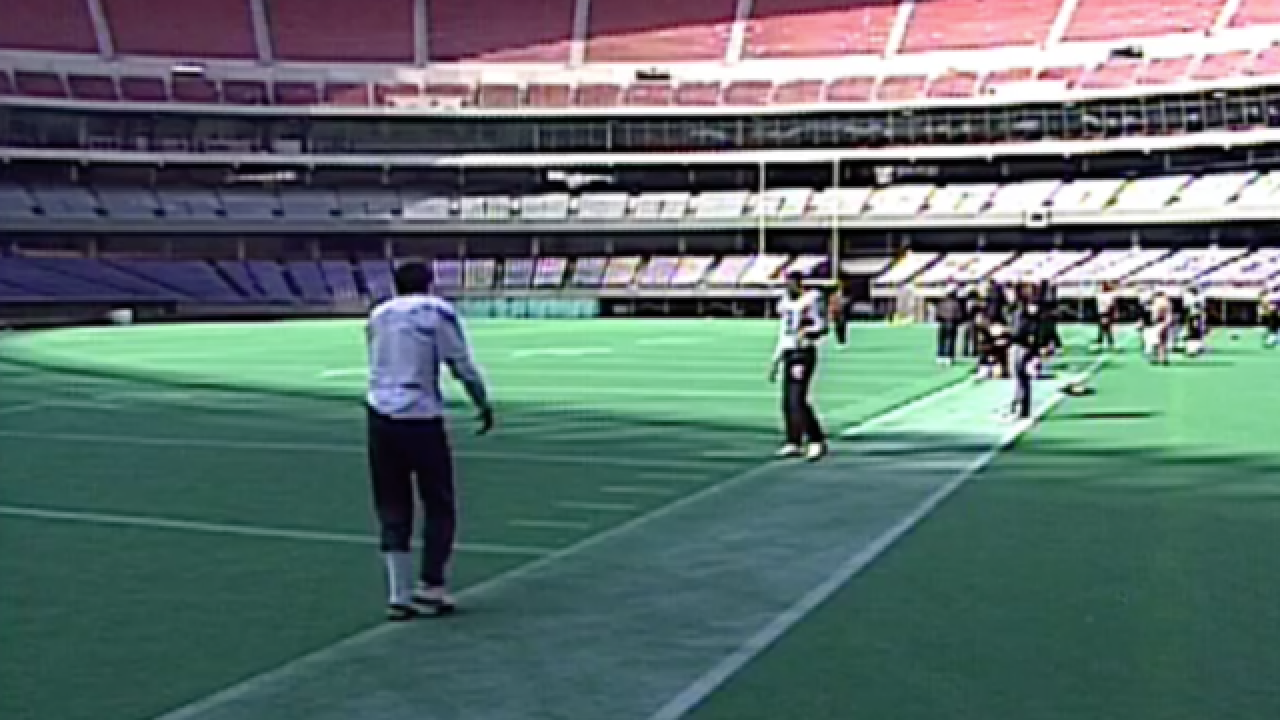 Copyright 2017 Scripps Media, Inc. All rights reserved. This material may not be published, broadcast, rewritten, or redistributed.
WCPO | file
<p>Bengals players warm up on the turf of Riverfront Stadium.</p> 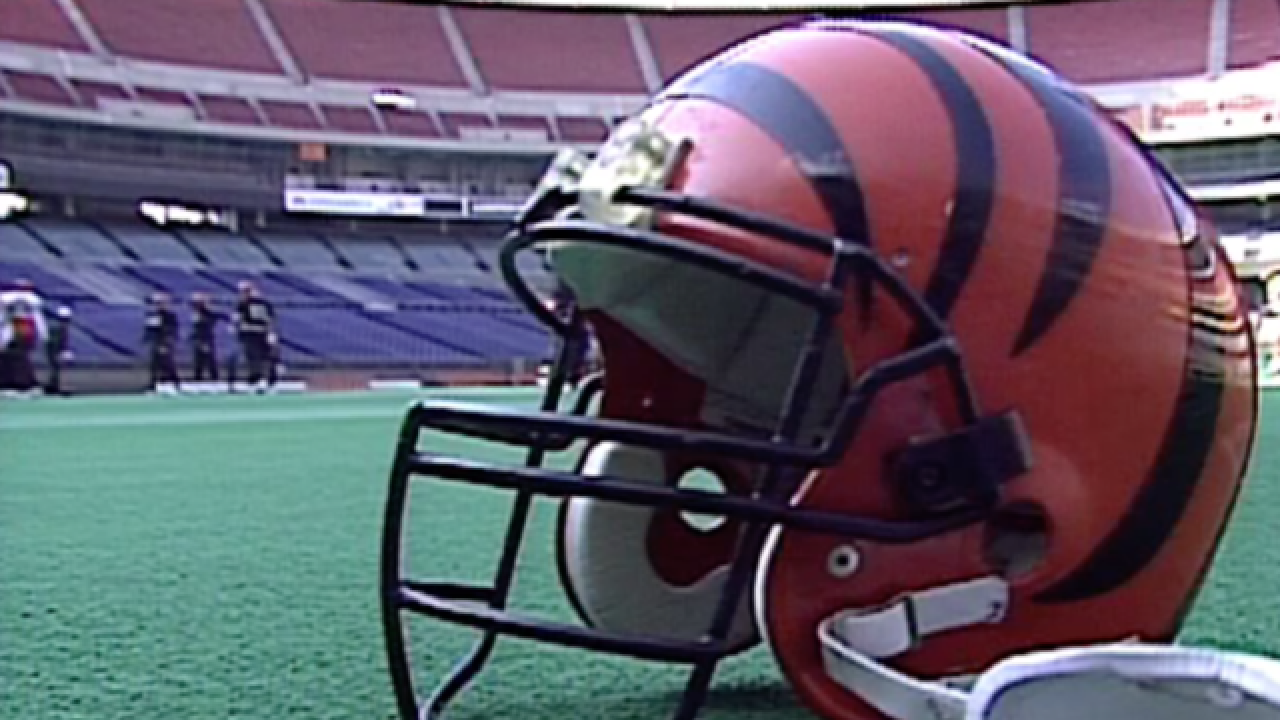 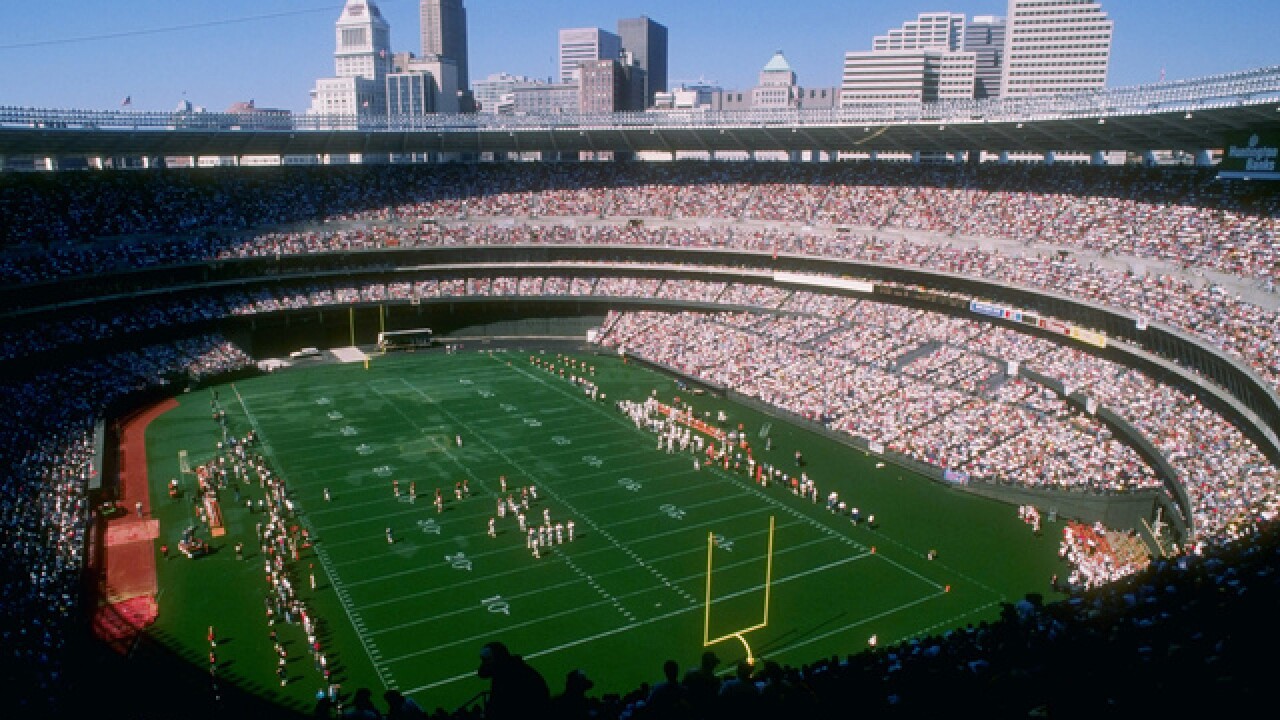 CINCINNATI -- Remember when pro football in Los Angeles was nothing more than a millionaire's dream?

Well, okay -- remember when, in 1995, the Raiders and the Rams both split L.A. for greener pastures, leaving their fans with nothing more to do than go to the beach...or watch Lakers basketball, or Dodgers baseball, or Kings hockey, or the MLS, or fawn over movie stars?

It's a shame they had nothing else to do.

But seriously, for 20 years, the City of Angels had to go without pro football. Now, the town will host both the Rams (again) and the Chargers. Football is back, baby! In double time. The NFL loves L.A. again.

But during those lean years, Los Angeles played a very large role in the soap opera that was football in Cincinnati, since the Bengals were one of many teams rumored to be interested in moving to La La Land.

Bengals owner Mike Brown wanted a new stadium, and he would do anything -- including threatening to move the team to another city -- to get his way.

"Southern California was mentioned as a potential destination (for the Bengals) in various media reports and NFL meetings," ABC News reported.

The L.A. Bengals? It could've happened.

But as we know, things went in another direction. In fact, the Bengals were much closer to becoming the Baltimore Ravens than any West Coast squad.

"In the meantime, Cincinnati Bengals owner Mike Brown began rubbing his chin," wrote Josh Kirkendall, of CincyJungle.com, in 2015. "Brown wanted a new stadium in Cincinnati, but rumors began circulating that the Bengals could relocate to Baltimore. Mike Brown spoke about it rather publicly -- an often-used negotiating tactic."

"Baltimore is certainly one of the most attractive cities," Brown told The Baltimore Sun in November 1993. "The money difference is staggering. You have what may be the No. 1 money producer (in the NFL). Here in Cincinnati, we have what will be the No. 30 revenue producer. Our preference is for an open-air stadium. Ideally, it would have 70,000 seats and 100 (luxury) boxes. It would be the stadium you plan to build in Baltimore."

And Brown had other problems to face -- like the IRS.

"In addition to playing in an outdated stadium (in Cincinnati), Brown was facing rising salaries and a $36 million tax lien by the Internal Revenue Service," Kirkendall reported. The lien centered on the sale of Bengals stock in 1983.

The Associated Press noted in 1995 that "Brown said he does not have sufficient cash to pay the lien, and is reluctant to sell part of the franchise to raise the money." (The Brown family eventually would win a court decision in 1997 and would not have to pay.)

For two years, Brown continued to spin his narrative of needing more money and a new stadium. But by 1995, he was ready to put his (lack of) money where his mouth was. He told local media that if he didn't get the new stadium by the end of the year, he would move the team.

Fans were not pleased.

"Since Brown took over as team president, the Bengals had separated with (fired/quit, depending on whom you speak to) popular head coach Sam Wyche," Kirkendall wrote. "Additionally, Boomer Esiason, realizing the direction of the team, demanded a trade and was playing for the New York Jets by 1993. From 1991 through 1994, the Bengals went 14-50 (winning only three games three times during those four seasons). Ticket sales fell dramatically and ownership was feeling that sting. A new stadium would bring ownership luxury boxes and the hope of a reinvigorated fan base. It was a fan base so angered and betrayed by the direction of the team, that many had said, 'Fine, go away.'"

But Brown would get his way. Hamilton County voted to increase sales tax to build and maintain the stadiums. The one-half-cent sales tax hike didn't cover construction costs, however, and Hamilton County residents were stiffed with the bill. This was in 2009, as the nation's economic recession ramped up.

In the book "Field of Schemes: How the Great Stadium Swindle Turns Public Money Into Private Profit," authors Joanna Cagan and Neil deMause have been analyzing "the roughly $2 billion a year in public subsidies that go toward building new pro sports facilities."

Their critique of the Bengals deal is eye-opening.

"Hamilton County's lease deal with the Cincinnati Bengals is bad. Real bad," deMause writes. "There's the requirement that the county pay to add such items as 'holographic replay systems' in the event they're ever invented, for starters -- but also plenty of items costing taxpayers plenty of money here in the actual present."

How much money? WCPO ran the numbers:

"Hamilton County taxpayers have spent more than $920 million since 2000 as part of a deal to build and operate Paul Brown Stadium," Amanda Seitz reported in January 2016. "By the time 2026 rolls around and the 26-year lease between the team and the county expires, the county will have spent more than $1.1 billion on the deal for the Bengals to play in Cincinnati."

“Is it worth it? I don’t know,” Hamilton County Commissioner Chris Monzel told WCPO last year. “My gut says it probably hasn’t generated the rate of return on investment that other projects do. From a civic pride standpoint, people are excited about (the Bengals). You’ve got some intangibles that you can’t really put a price tag on.”

With FC Cincinnati and US Bank Arena now looking for public handouts, it's a good time to revisit the game of chicken the Bengals played.