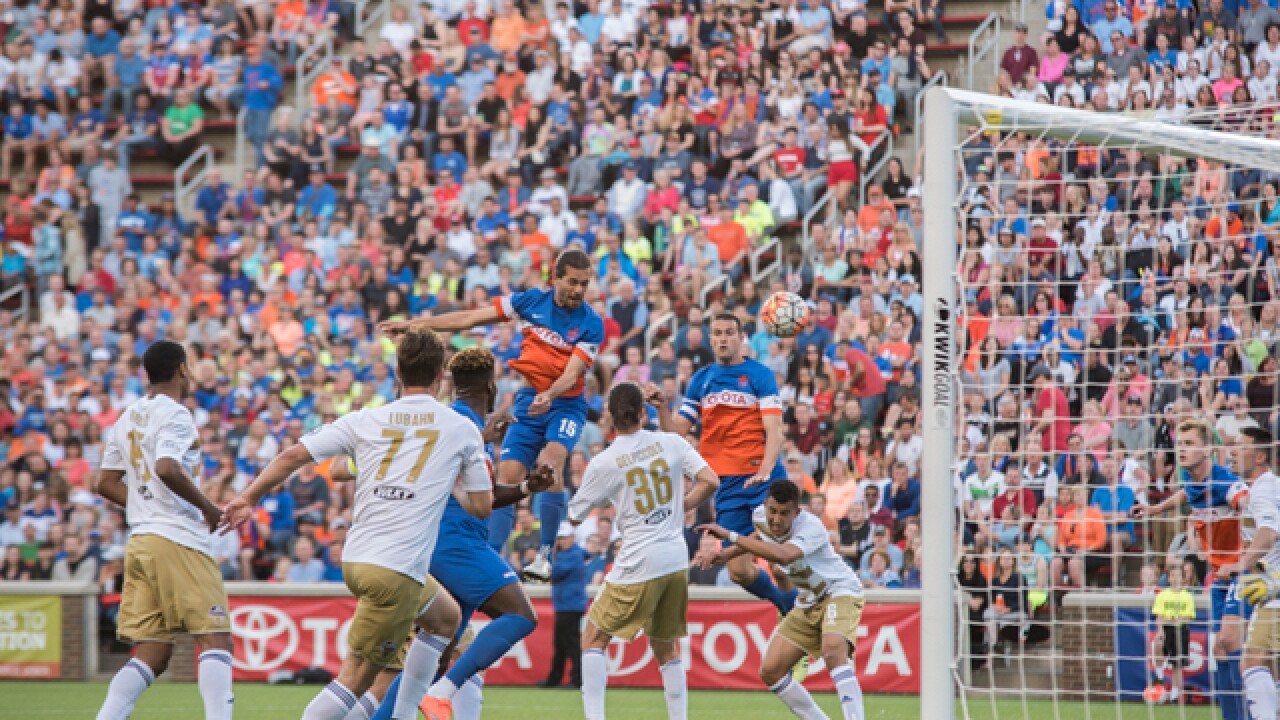 Copyright 2018 Scripps Media, Inc. All rights reserved. This material may not be published, broadcast, rewritten, or redistributed.
Phil Didion
FC Cincinnati's Pat McMahon heads the ball toward the goal without success during their game against Louisville FC at Nippert Stadium on Saturday April 16, 2016. Louisville wins the game with a score of 3-2 (Phil Didion for WCPO).

CINCINNATI -- An early lead didn’t hold up for FC Cincinnati (2-2) this time, as Louisville City FC (3-1) rallied from behind for a second straight game to win the first battle of the River Cities Cup.

Summit Country Day graduate Austin Berry scored on a header in the sixth minute to put FCC on the board first, but Louisville forward Chandler Hoffman answered with a first-half hat trick and that was enough to spoil a big night for FCC fans.

Despite a late goal from Pat McMahon, FCC dropped a 3-2 loss Saturday in front of a United Soccer League regular-season record 20,497 fans at Nippert Stadium. The two teams were tied in the USL Eastern Conference standings with six points entering the game, but Louisville now has nine.

Here are the Top 9 takeaways from the game:

Best to start with a positive, right?

After drawing 14,658 fans to the home opener last week – a game the club was able to hype up for seven months – FCC was able to not only surpass that total Saturday but set a USL single-game, regular-season record. The Sacramento Republic set the previous record in 2014 at 20,231.

“The fans and the families that are here clearly shows that Cincinnati is easily ready for this market for soccer,” FCC coach John Harkes said. “The numbers that turned out tonight, they make a huge difference, and I hope they can sustain it.”

FCC is on the road next week, playing at Toronto April 24, and returns to Nippert Stadium April 30 when it hosts Wilmington Hammerheads FC.

Hoffman put away two nice shots in the run of play, but Cincinnati left him open both times.

On the first one, FCC had two defenders close in on the near-post runner, who let the ball off the cross slide through with Hoffman unmarked at the far post. Louisville started the play on a quick counter near midfield. On the second one, the defense was just playing a little too far off Hoffman before the cross. It looked like Tyler Polak slightly deflected the ball trying to close in on the shot, but the ball still skidded into the right lower corner of the goal.

“Maybe our body position wasn’t right, a little bit of luck was there, and to be fair, he put the ball in the net,” FCC coach John Harkes said.

3. Man-up wasn’t enough of an advantage

Louisville went a man down for the final 49-plus minutes of the game after defender Sean Reynolds picked up his second yellow card on a hard challenge on Sean Okoli in the 41st minute. Cincinnati couldn’t take advantage until McMahon scored off a corner kick in stoppage time, though, as Louisville’s 5-3-1 and 4-4-1 proved to be too much pressure for FCC’s attack.

“We responded and sort of pushed the game at the end to get the second goal, and give them credit, they dug in and fought hard,” Harkes said. “Often times you see a team go down a man or down two men and they compete and fight and dig in and it makes it very difficult. They created some blocks in a 4-4-1, they dropped off and conceded a lot of space in front of them, but they battled in the box and some of the calls didn’t go for us, including a possible handball on them.”

Harkes didn’t feel like his team was outplayed by any means.

FC Cincinnati outshot Louisville 16-6, including a 10-3 differential in the second half, but visiting goalkeeper Scott Goodwin needed just five saves.

“I think there were times just that final ball wasn’t there for us, or a little bit of the bounce,” Harkes said.
“If we’re not creating these chances, there would be a big concern. I think it’s the fact that maybe it just wasn’t our night tonight because there were a lot of creative outlets and great service in there. It’s tough to break down a team that drops back like that. They shrunk the field very well and made the space behind very tight for us to play in, and that makes it difficult.”

5. Physicality turned up a notched

The game was much more physical than Cincinnati’s past three outings, as evidenced by the four yellow cards issued in the first half alone.

The teams combined to finish with 19 fouls, but Harkes thought Louisville got away with a few too many.

“To be fair, early on a lot of the calls went against us until the second yellow and the red card,” Harkes said. “It took about six fouls before they got their first yellow. We had one challenge down the right-hand side and we got a yellow straight away. That’s what you’re dealing with, and you have to be able to deal with adversity.”

This was the first game FCC has fallen behind early and trailed for a long stretch of time.

Cincinnati took 2-0 leads in its two wins and only gave up a goal in stoppage time in its previous loss. Even Berry didn’t feel like the team was clicking Saturday.

“We were not at our best tonight,” Berry said. “Speaking for myself, I was not connecting on balls, and we missed a lot of passes.”

7. Berry has a knack for scoring, though

The Cincinnati center back headed in a free kick delivered by Polak for his second goal in two games, proving his value in the attack as Harkes continues to push his defenders forward in both the run of play and set pieces.

He and Okoli, a forward, lead the team with two goals each this season.

Offense is usually a little slower to come around than defense, based on the chemistry needed to make connections in the attack, but FCC can take some comfort in its ability to score first, which it’s done in three straight games.

However, FCC still needs to figure out how to sustain the early momentum.

“I think it’s two games in a row now that we have had a fantastic crowd that we get a goal at the beginning (six minutes),” Berry said. “It needs to be a full 90 minutes.”

9. Corrections to be made

Despite the loss, Harkes said there are “a lot of positives” that came out of the game in terms of lessons learned. And, at least it’s still early in the season.

He indicated that could mean some changes to the formation (he’s been starting with a 4-3-3), but that will depend on film review of the game.

“We just have to go look at this, and we’ll see how we can make things better for us in terms of our shape and responsibilities and define the roles,” Harkes said.

When asked to elaborate, he added: “Just taking up different positions for us, closing the space earlier, and when we decide to press the game, at times we got a little more stretched than I would like. It’s just some little details we can correct.”