Players trying to figure out how slide into 2nd 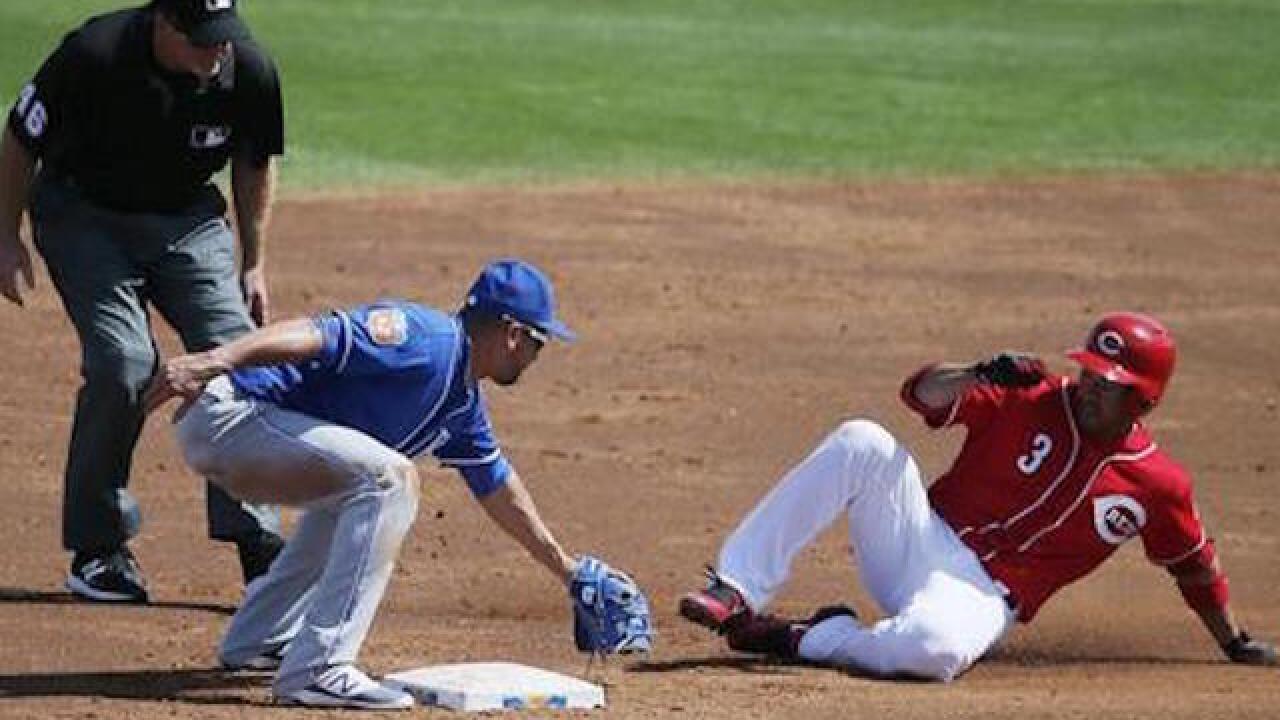 Copyright 2012 The Associated Press. All rights reserved. This material may not be published, broadcast, rewritten or redistributed.
Ross D. Franklin
<p>Trying to stretch a single into a double, Cincinnati Reds' Ivan De Jesus (3) slides into a tag by Kansas City Royals' Omar Infante as umpire Ron Kulpa gets ready to make the out call during the second inning of a spring training baseball game Tuesday, March 15, 2016, in Goodyear, Ariz. (AP Photo/Ross D. Franklin)</p>

Something that used to be second nature in baseball — sliding hard into second base to prevent a double play — is deciding games and giving major leaguers fits a week into the season. From the AL to the NL, runners making that 90-foot dash are wondering: What's acceptable anymore?

Twice during opening week, a game turned on a slide that was ruled unacceptable. The most recent dust-up occurred Friday night in Milwaukee when Colby Rasmus was called for interference, resulting in a game-ending double play in the ninth inning that allowed the Brewers to hold on for a 6-4 win.

Better believe it's going to keep happening until everyone figures out what's allowed under the "Chase Utley rule," enacted after his slide broke the leg of Mets shortstop Ruben Tejada during the playoffs. Players have to slide at the base and be able to maintain contact with it — Rasmus slid past the base and was called for interference.

Every team in the majors will see the play as another teaching moment. Major League Baseball sent 20 videos to teams in the offseason defining what's acceptable and what's not. The Pittsburgh Pirates show videos of the most recent "Utley rule" slides at the start of each series.

"Any time there becomes an issue in the league where a guy is called out, we show that slide so guys can see it," manager Clint Hurdle said Saturday morning before a game against the Cincinnati Reds. "When we have our next (team) meeting, Monday in Detroit, we'll show the slides that have happened from the last bit of slides.

One week in, teams aren't so sure. Hurdle asked for clarification from MLB on why a Cardinals runner wasn't called out for turning his body toward the infield while sliding into the base during their opening series.

Is that allowed? Was it a borderline call? Is it a gray area that needs to be cleared up?

"We're confused by it," Yankees manager Joe Girardi said Saturday before a game in Detroit. "We've told our players: Slide into the base. But I'm going to say it again: We've told players for years not to dive head-first into first base. What do they do? Their instinct takes over, they're playing hard, and they do it. So I think it's hard. I think it's going to be hard for players."

MLB knew there would be a break-in period. Only three days into the season, the outcome of a game was directly affected by the new rule. Tampa Bay got a 3-2 win over Toronto when Jose Bautista was called for an illegal slide into second base in the ninth inning, negating an errant throw by Logan Forsythe that would have let in a go-ahead run for the Blue Jays.

There was a lot of complaining over that one, too. The umpires reviewed Bautista's slide and determined it wasn't directly into the base, hindering Forsythe. The result was a game-ending double play.

While runners are still adjusting to the rule, middle infielders are supporting the crackdown. They've all been leveled while trying to turn a double play and they know how dangerous it can be.

"Now they just slide into the base, we've got time to touch the base and get out of the way," the Yankees' Starlin Castro said. "It's good because it's less injury for middle infielders. We just make sure we stay on the base as long as we can and we'll be fine."

Managers figure it'll all get worked out, much the way players adapted to the rules enacted to protect catchers a few years ago. There were questions at the outset about what was an acceptable slide into home plate and whether a catcher was improperly blocking the plate.

The players will adapt, and there will be fewer outbursts on Twitter.

"It's very similar to what's gone on at home plate," Hurdle said.