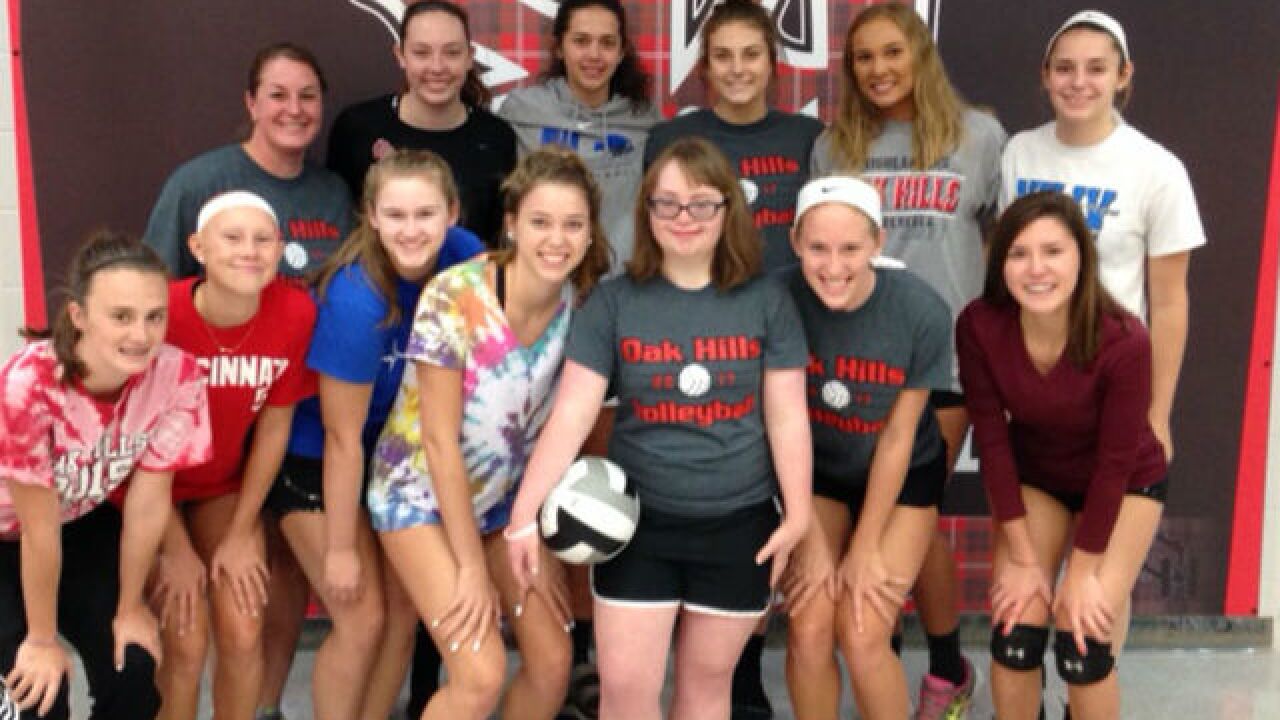 Even if the sophomore has to miss a match like she did this past weekend, she sends encouraging text messages to her teammates.

When the 16-year-old student manager is on the court, she lifts the spirits of everyone around her.

“Audrey is always a positive face no matter what’s going on,” junior libero Thalia Georges said. “Even if we are down on each other she will always have her wise words of encouragement. She is a very big part of the team. She helps us stays positive. It’s awesome.”

Hobstetter, who has Down syndrome, has a keyword that applies to her and her teammates in matches, in practice, in school and in life: Focus.

The Oak Hills volleyball program had that theme in mind this week as they tie dyed shirts with the word “Focus” on the front. The varsity team planned to wear those shirts and tutus to school Friday and surprise Hobstetter early in the morning when she stepped down from the bus.

Those outfits are in support of Hobstetter’s participation in the annual Buddy Walk Saturday morning at Sawyer Point.

Last season, the Oak Hills freshman team created shirts and wore tutus for Audrey in a royal princess court theme. The idea was taken a step further this year and included all of the Oak Hills girls' volleyball program and other students at the high school.

“It helps them recognize that there is different people out there,” Oak Hills freshman coach Elizabeth Firsich said. “Everybody can put their mind to anything and can do it. They take (Audrey) under their wing and treat her like any other teammate.”

Lynn Hobstetter, Audrey’s mother, said the volleyball players and coaches have always been supportive of her daughter even going back to Rapid Run Middle School where she was able to serve in a regular match as an eighth-grader.

“I think they’re great,” said Lynn, a special education teacher at Western Hills High School. “They’re totally letting her be as included as she can and wants to be. They don’t treat her any different than they would treat anybody else and that’s the most important thing to a parent with special needs.”

Audrey’s duties as a student manger include feeding balls to the coaches, shagging balls and standing in the huddle with the team. She stands on the end line when the team is introduced and gives inspiring words throughout a match.

“She always put a smile on my face especially when I am not doing so great in the game,” senior Kate Schaible said. “She will always give me a high five and clear off my seat like I meant something to her.”

Volleyball isn’t the only sport for Audrey, who lives in Delhi Township.

She swims for the Special Olympics in the winter. She plays Miracle League Baseball through the Cincinnati Recreation Commission. She loves the Reds. She enjoys watching football and basketball.

Being a student manager for the volleyball team allows Audrey to be a teenager, her mother said. Lynn said the team isn’t patronizing; it’s simply being inclusive.

“She is really glad to be a part of the team,” Lynn said. “It gives her a chance to connect with them on a non-academic level and that’s so important.”

Despite a loss to Mason Thursday night, Oak Hills (6-3) is also enjoying a solid start to the season. The team chemistry is evident everywhere. Head coach Jenny Meyer likes what she's seen through eight matches.

"Our volleyball program is on the front edge of what looks to be a very special season,” Oak Hills Athletic Director Tony Hemmelgarn said. “They have an awesome group of girls that are proving to be good leaders, competitors, teammates and representatives of Oak Hills High School. What they are doing as a team for one of their own doesn't surprise me at all.”

Senior middle blocker Abby Schutte said practices run smoothly when Audrey is there. The team doesn’t view Audrey any differently from the other girls. They're simply having fun together on the court.

“At the end of the day she is a human being,” Schutte said. “That’s how she should be treated -- whether she has something that holds her back in life or not. It really doesn’t hold her back as much as people would like to believe Down syndrome does.”