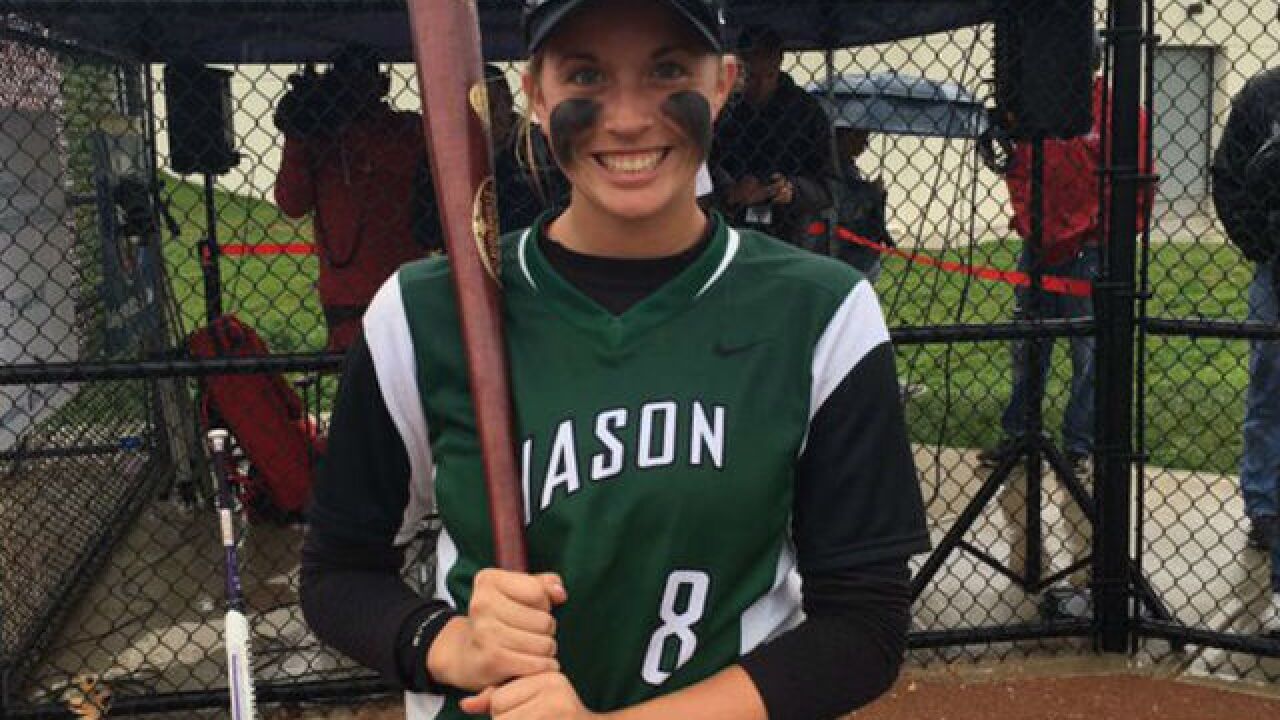 CINCINNATI – The softball showdown proved to live up to the hype despite rainy conditions Saturday morning.

Mason improved to 18-0 this spring with 4-2 win over rival Lebanon in a rematch of the 2015 Division I regional final that Lebanon won.

The game was part of the scheduled closing day of the Skyline Chili Reds Futures Showcase played at the P&G MLB Urban Youth Academy.

“It was a typical Mason-Lebanon game,” Mason coach Liann Muff said. “Every inning is a battle. Great defense by both teams. We battled at the plate making contact and finally broke through in the third inning.”

The game was scoreless until the top of the third inning when Mason broke through with two out. The Comets scored on error before sophomores Olivia Popovich and Elana Harrison reached on singles.

Then, sophomore Zoe Bishop had a double that drove in three to make it 4-0.

“I think we did a really good job as a team of not letting the rain get in our heads and just keep playing our game,” Bishop said. The left fielder was named the MVP of the game.

Lebanon (10-9) added runs in the third and sixth innings.

"We need to focus on the little things more to give us a chance to win," Lebanon coach Brian Kindell said.

Muff was happy with her pitching. Junior Elle Buffenbarger picked up the win and improved to 15-0 on the season. She has 108 strikeouts and a 1.02 ERA. She doesn't get rattled and that's been a key for the Comets.

Muff said she is impressed with her team’s focus as May approaches.

“It was super important to get a win here today,” Muff said. “I told the girls before the game ‘you have worked this entire season for today.’ This is the best chemistry team we have had in a while. They really pull for each other. I couldn’t be happier than taking one more step closer to their ultimate goal.”

BOYS’ BASKETBALL:  Former Withrow guard Tim Coleman committed to play at Utah on Friday. Coleman played this past season with Lee College (Baywood, Texas).  He took an official visit on Thursday. He averaged 14.5 points, 3.9 assists and 3.8 rebounds for Lee College in 13 games this past season.

FOOTBALL: Covington Catholic will play three Friday night home games under portable lights with 7 p.m. kickoff starts in September, according to athletic director. Tony Bacigalupo.  “It should make for a fun atmosphere,” he said. The night games will be Sept. 2 (vs. Sycamore), Sept. 9 (vs. Lexington Catholic) and Sept. 16 (vs. Beechwood). The only other time the Colonels played with lights was in September 2007 against Beechwood. CovCath played a 5:30 p.m. start in 2015 when no lights were needed. The Colonels play just one home Saturday game this season – vs. Dixie Heights Sept. 22 at 1 p.m.