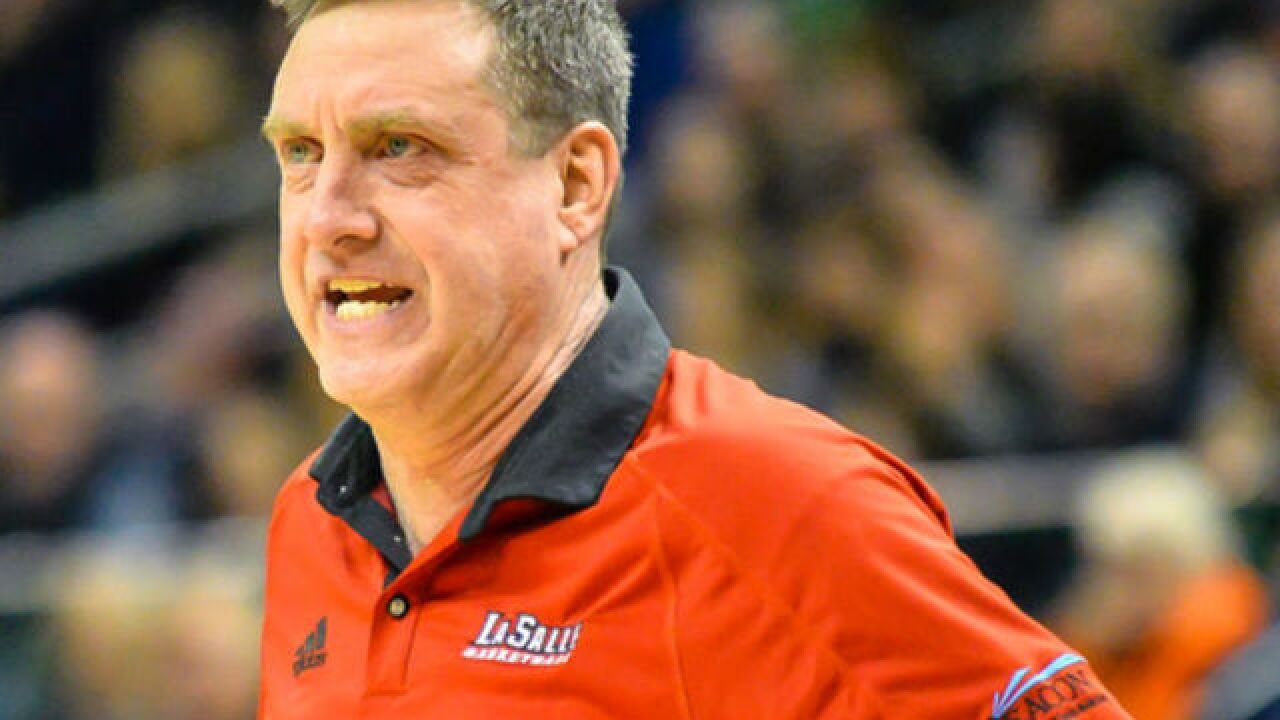 Copyright 2017 Scripps Media, Inc. All rights reserved. This material may not be published, broadcast, rewritten, or redistributed.
Michael Noyes | WCPO Contributor
<p>La Salle head coach Dan Fleming eyes his team during a time out against Moeller in the state playoffs last month. </p>

GREEN TOWNSHIP, Ohio -- La Salle basketball coach Dan Fleming always wakes up before his alarm clock goes off at 6:50 a.m. each weekday at his Monfort Heights home. He can't wait to make the short drive over to La Salle.

"I don't know if I have ever had a job," Fleming told WCPO.com. "Working at La Salle is so enjoyable. I am so lucky and fortunate. I've been blessed for 29 years."

Fleming, 54, announced Monday afternoon he is stepping down from the head basketball coaching position after 27 years in order to spend more time with his family. He's been with the La Salle basketball program for 29 years overall; he was a varsity assistant for two seasons prior to being named head coach in 1990.

Fleming informed La Salle Athletic Director Keith Pantling of his decision Monday afternoon at the school. Fleming is the school's all-time winningest basketball coach. He will continue to teach physical education and health.

Fleming and his wife, Lissa, want to be able to watch their children play or coach basketball next season.

Dan Fleming said he didn't want to worry about if he had enough energy to coach the Lancers for a 28th year. He made the decision in December 2016 but didn't want to announce it as not to put undue pressure on his team this past season.

"It seemed like the right time for me," he said. "I wouldn't want shortchange La Salle. There are simply not enough hours in the day to do everything."

The school has not announced details for when it will name a new coach. Dan Fleming will continue to operate a basketball camp at La Salle this summer and wants to help the school in any way possible.

"He’s spent nearly three decades here on that sideline," Pantling said. "He’s positively impacted the perception and stability of this school with the visibility of the program. He gave everything he had, and won a lot of games along the way.

"A mentor of mine once told me you can measure the success of a coach by how often his former players come back. Flem’s were back all the time and are extremely appreciative of him. He has influenced so many young men and truly helped transform lives through basketball."

Fleming completed his La Salle coaching career with 452 career overall wins. He earned seven wins at Taylor High School in 1987-88. He was an assistant at La Salle for two years prior to taking over the La Salle position in 1990. His record at La Salle was 445-198.
Fleming is most proud of the relationships built over almost three decades at the school. More than the wins and losses, it's the family atmosphere at La Salle that he'll remember. That was evident at the recent team banquet held at LaRosa's.
"It's the people we got to know," Fleming said. "The teachers and families are so supportive. The school is really good and going in the right direction."

Carl Kremer, who has been Moeller's coach since 1989-90, says he admired and respected Fleming. He said Moeller became better as a program because of the competition it faced with La Salle teams coached by Fleming.

"It's clear that he is one of the best to ever coach in the state of Ohio," Kremer told WCPO.com. "He had an incredible ability to have his kids play at an insanely tough level."

Joe Schoenfeld, who has been Elder's coach since 1992, remembers coaching with Fleming in the mid-1980s at Elder. Fleming coached the freshman team from 1985-87 at Elder. Schoenfeld coached the junior varsity team in those years under varsity head coach Paul "Hans" Frey.

"I always thought Dan's teams were very organized," Schoenfeld told WCPO.com. "They had a great plan with what they were doing. Discipline was the second thing. The kids really bought in and did the right things Dan wanted to do. And third, they competed. They really got after it."

Oak Hills coach Mike Price said Dan Fleming always got the most out of his players. He said Monday was sort of a sad day for Cincinnati-area basketball. Price coached CJ Fleming in AAU and knows the family well.

"I have a lot of respect for Dan," Price said. "I know he felt like this was the best decision for him and his family."

The Lancers (24-4) finished as a Division I regional runner-up this past season.

"We really have something special here," Fleming wrote on the school website three days later. "So when I finally sat down to talk to the team in the locker room, I just had this overwhelming sense of pride in La Salle Basketball and the small role we play in making such a great institution. Their pain in losing was very real to the players because they gave everything they had every single day to be the best. I tried to tell them that the pain will pass but the memories of what they were a part of will live on forever. I have been very blessed to be the head coach here."

CJ Fleming was named a GCL South Player of the Year for a third consecutive season. The Bellarmine University signee was named an Associated Press Division I second team all-state selection.