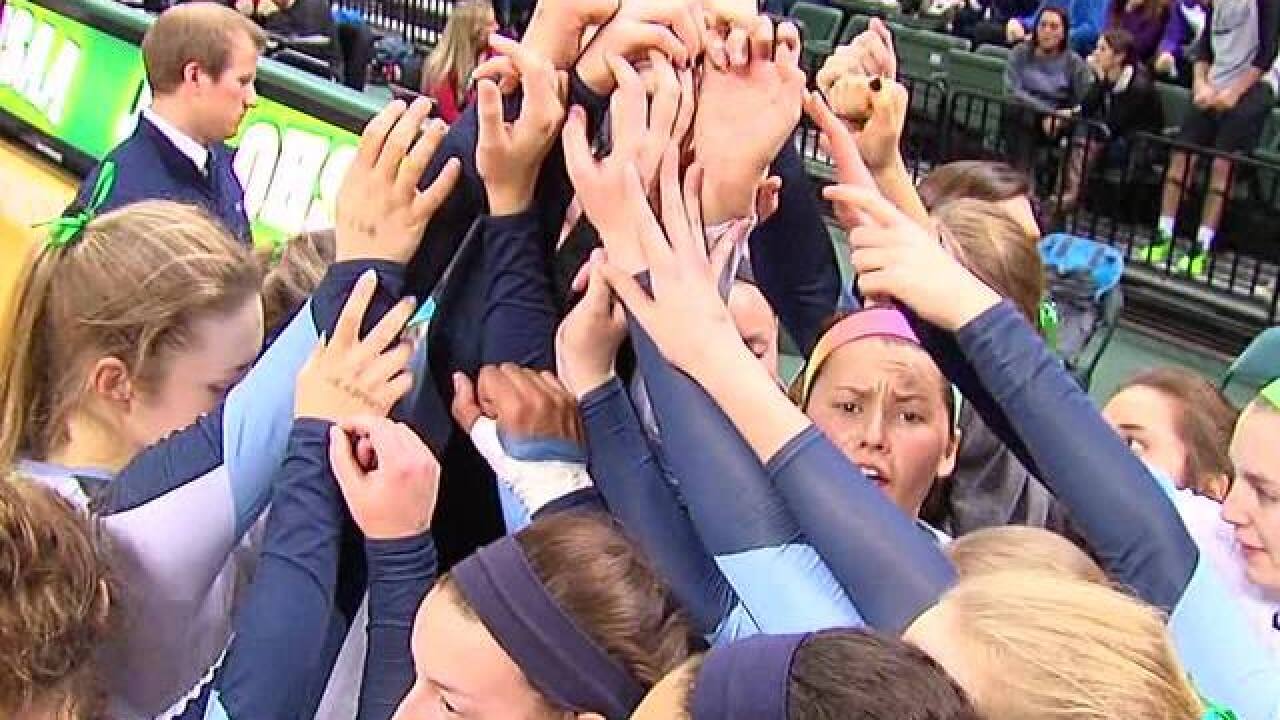 DAYTON, Ohio – It's a concession speech the Mount Notre Dame Cougars are used to hearing. Just not from this particular side of the aisle.

As standard during post-game awards, Ohio High School Athletic Association officials often offer solace to the second-place team; on this rare occasion, the Cougars were that recipient.

The team failed in its quest for a state-leading 10th title overall – and fourth in a row. But don’t worry. The future is bright.

"Once we get over this, we'll be back to work," Cougars coach Joe Burke said. "We've got a lot of talent in the gym."

So much, in fact, MND practiced with 21 girls on its post-season roster. As a rule, only 12 can dress for games. Two stood out in particular Saturday: Middles Grace Hauck and Sarah Riesenberger, who led their team with 23 and 16 kills, respectively. Hauck had three consecutive kills in a key fourth set to push her team to a 23-22 lead before the Cougars ultimately fell.

"They both played fantastic today," Burke said. "Really everyone's taken a turn stepping up throughout this postseason. Every game, there's two or three people who've stuck out. In the end, they (Brecksville) just made more plays."

The Cougars certainly seemed outmatched in the first two sets. The Bees won both with equal scores of 25-21. But MND rallied big in the third, pushing ahead with leads of 15-8 and 20-13 before a Kristina Merke ace forced a game four.

MND trailed early but tied the set at 20-20 and it took its first lead at 23-22. Burke said he referenced Thursday's semi-final win over Dublin Coffman "multiple times" throughout. The Cougars trailed 18-23 in the fourth set of that match before rallying to an epic 25-23 win.

"We talk about all that stuff very openly," Burke said. "We don’t hide from it. I told the girls we've been here before; we've been put in way worse situations than this. Really, in back-to-back games, we had bad situations."

But with three set points, the Cougars couldn't pull through. A block and hitting error gave the Bees the state title with a 27-25 finale. Brecksville was led by outside attackers JoAnna Chang and Abby Barth who had 23 and 16 kills, respectively. All-Ohio setter Shannon Williams dished out 50 assists.

"That was the most complete team we've played all season," Burke said. "Obviously, given our regular season record (10 losses), we struggled at times throughout the year. We graduated a lot of starters from last year – basically all our starters. But I'm so proud of how the girls stuck together. They showed a lot of heart; a lot of fight."

MND will graduate five seniors from its roster, including Riesenberger, libero Lauren King, who recorded a match-high 26 digs, and defensive specialist Brooke Frazier, who added 15.

And even with the loss, MND set a new state record for post-season hardware.

In 14 trips to the state final four, the Cougars have played in the finals 12 times. Words that should offer some solace, after all.