Lynchburg-Clay gets support, but comes up short 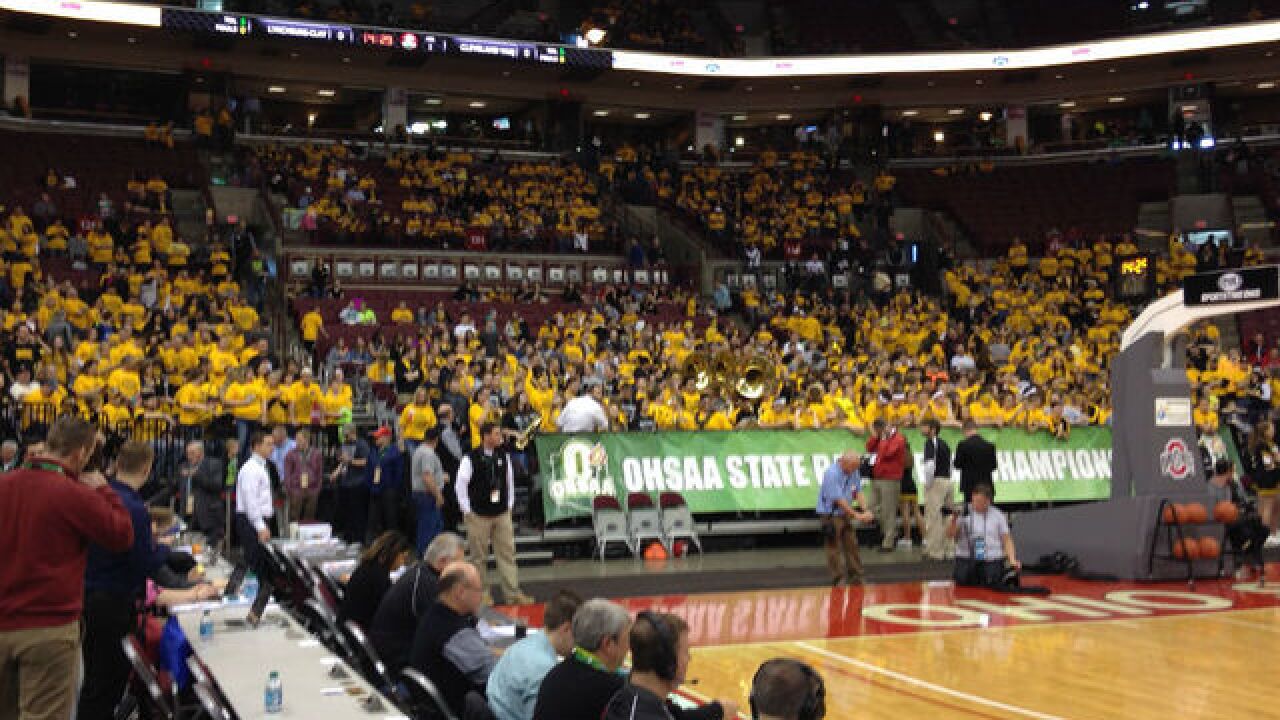 Mike Dyer | WCPO
<p>Lynchburg-Clay had a large number of fans who traveled for Thursday's state semifinal game in Columbus.</p>

Lynchburg-Clay lost to Cleveland Villa Angela-St. Joseph 81-64 in a Division III state semifinal here, but the Mustangs have plenty to be proud of this winter.

“This experience has been great,” Lynchburg-Clay coach Matt Carson said. “We’ve had tremendous support from our community throughout the run from making signs to pre-sale tickets. We sold over 1,500 I think for this game I think. Everybody was out there in gold.”

The Mustangs (25-3) returned to the state tournament for the first time since the 1993 season. The school has 134 boys – the smallest enrollment among the Final Four teams in Division III.

But, the school and its fans brought a ton of heart to the campus of Ohio State University. Fans were seated in the home section well before the 10:45 a.m. start.

“Coming from a small rural area like we do it wasn’t just our area that was excited about this,” Carson said. “It was our county (Highland) and our conference (Southern Hills Athletic League).”

Lynchburg-Clay senior 6-foot guard Devin Pierson noticed the fan support. He scored a game-high 28 points for the Mustangs. Pierson finished his career second on the school’s all-time points list behind former Northern Kentucky University standout Paul Cluxton, who was on that 1993 squad.

Pierson saw plenty of Lynchburg-Clay attire among the 8,433 in attendance for the first session (first Division III state semifinal).

“It was awesome,” Pierson said. “Just looking up and seeing all the gold on our side. I think we sold about 2,000 presale tickets at our school. Our community is not very big, but most of them were there today so it was pretty awesome to see them there supporting us.”

But, the Mustangs quickly responded each time in the first half. Junior forward Joe Giordano made a 3-pointer at the top of the key as time expired to pull the Mustangs to within 31-28 at halftime. Giordano had 12 points and seven rebounds for the game.

The Mustangs got as close as a seven-point deficit (57-50) with 5:53 left in the fourth quarter, but couldn’t draw closer.

Lynchburg-Clay was 23 of 26 from the free-throw line. Carson said the Mustangs thought the key would be to get the ball inside and he said his team did a better job of that in the second half.

“I felt like they may have had the quickness advantage at the guard position, but I thought we could use some mismatches inside to get to the line,” Carson said. “…Again, credit to them. Their pressure out front on the perimeter I think bothered us in the fourth quarter.”

Carson said the seniors set a significant standard going forward and he was proud of not only the play on the court, but the character of the team.