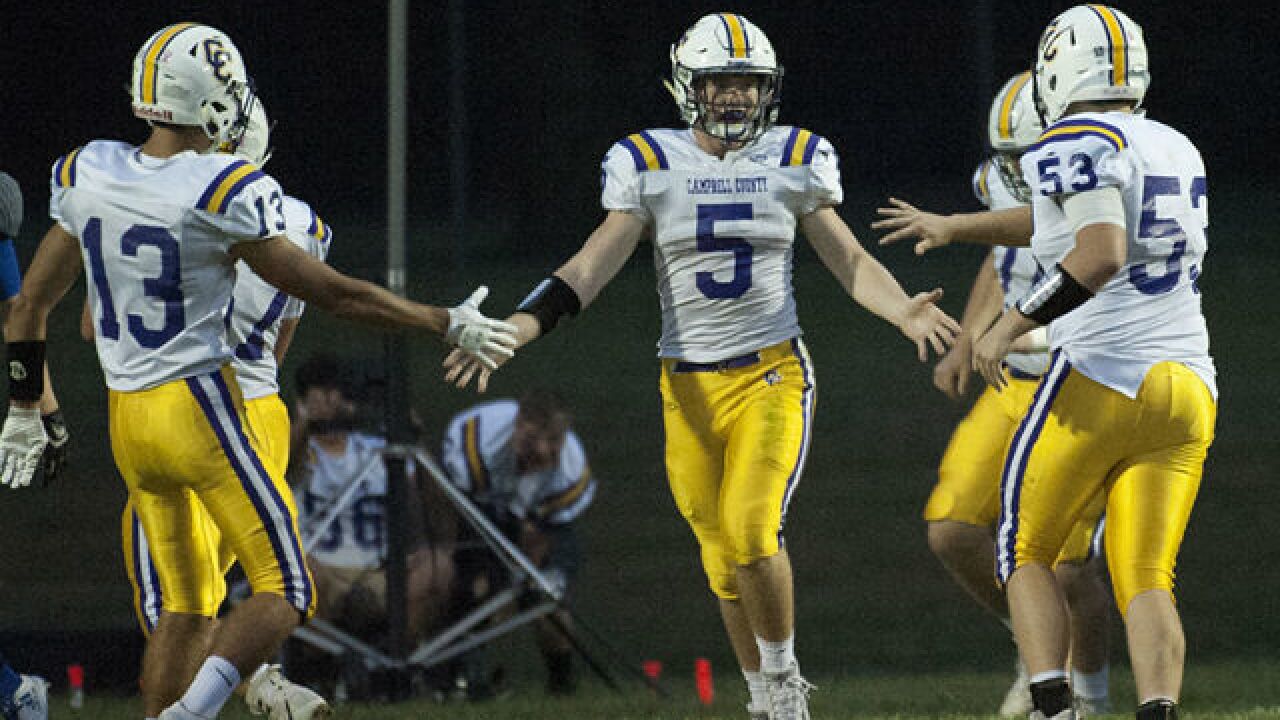 HEBRON, Ky. – The Campbell County Camels turned into the Alex Dowds Show on the way to a 54-28 win over the Conner Cougars at Fred Nevel Stadium.

The senior running back also chipped in three receptions for 40 yards, going over the 400 yards in total offense.

It could not be confirmed by Campbell County officials at the end of the game whether or not Dowds’ performance was a school record for rushing yards in a game.

It was confirmed that Dowds became the first Campbell County 1,000-yard rusher in a season since Carson Plessinger in 2014.

Dowds gave credit to his teammates for his special night.

“The offensive line did a great job to make the holes huge for me tonight. Our receivers and tight ends blocked downfield to make it super easy for me,” Dowds said.

The Camels defense was superb in the first half, allowing Conner just 16 yards of total offense. Campbell County forced two turnovers and recorded three sacks, two for Tanner Lawrence and one by Emmett Rece.

Dowds broke a 74-yard run, setting up the Camels’ first score - a 4-yard pass from Austin Hoeh to Jolly.

After Conner punted back to Campbell County on the ensuing possession, Dowds raced 81 yards to the end zone   on the second play of the drive. In the first half alone, Dowds rushed 213 yards.

Conner showed signs of life when Tate Niederman blocked a Campbell County field goal attempt late in the first quarter, but the Cougars could not capitalize on the momentum shift.

The Camels special teams also came up big when Brady Singleton recovered a muffed punt return attempt by the Cougars. Campbell County took over near midfield and scored nine plays later when Hoeh ran it in from the 9-yard line.

Despite trailing 28-0 at halftime, Conner came out of the locker room invigorated and scored on its first possession on the second half. Jaylen Watkins caught a 33-yard touchdown pass from Gullion.

Dowds answered with a pair of rushing touchdowns from 34 and 27 yards. Campbell County went for the two-conversion on the second of Dowds’ third-quarter scores in an effort to put the running clock into effect. Downs was stopped short of the goal line by the Conner defense, preventing the 36-point lead mercy rule.

Watkins caught a 45-yard touchdown pass to breathe some life back into the Cougars.

Dowds put an end to the false hope breaking a 97-yard touchdown run, essentially putting Conner out of its misery.

The Cougars still had plenty of life by scoring a pair of fourth quarter touchdowns, but it was too little, too late to salvage a win.

Grant Jolly caught a touchdown pass midway through the fourth quarter from Hoeh, who threw for two touchdowns and scored two more on the ground.

The Camels senior class won just one varsity game as sophomores but have put themselves in a position this season to make some noise in their district. Downs talked about the commitment his teammates have put into their final season on the gridiron.

“The past couple years were kinda rough, but the seniors knew this season we had to put the work in the offseason and it’s starting to pay off,” said Dowds.

The Camels have a tough test next week against the undefeated Simon Kenton Pioneers in Independence.