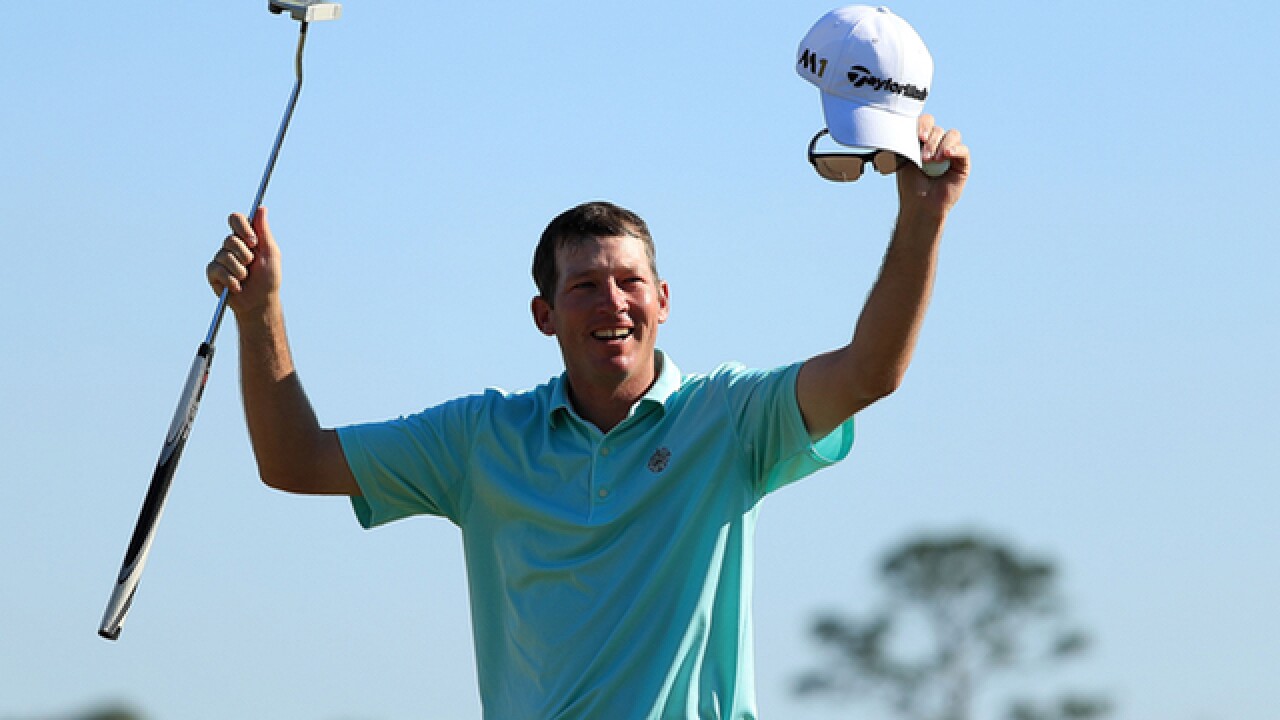 Scott Halleran
<p>HUMBLE, TX - APRIL 03: Jim Herman of the United States celebrates his victory on the 18th green during the final round of the Shell Houston Open at the Golf Club of Houstonon April 3, 2016 in Humble, Texas. (Photo by Scott Halleran/Getty Images)</p>

Herman, winless in 105 previous starts on the PGA Tour, chipped in for birdie on the par-3 16th and finished with two solid pars for a 4-under 68 and a one-shot victory that sends him to the Masters for the first time in his career.

Herman, a Cincinnati native, tapped in for par and thrust both fists in the air after his one-shot victory over Henrik Stenson.

"Sorry for the tears, but I'm pretty happy," Herman said in his TV interview. "We really did a good job keeping our game plan. We wanted to give ourselves as many birdie chances as we could and keep it low stress. And geez, look what happened. Never thought it was possible."

The Houston Open was the final opportunity for players to get into the Masters, and Herman seemed like a long shot at No. 191 in the world whose only professional victory was six years ago at the Moonah Classic in Australia.

Stenson missed an 18-foot birdie putt on the last hole for a 68 to finish one shot behind. It was the Swede's eighth runner-up finish since his last victory in Dubai at the end of 2014.

Dustin Johnson tried to overcome a double bogey on the 11th hole. He made three birdies coming in, but had to settle for a 69 and was two shots back.

Jordan Spieth made four straight birdies early in his round, but two shots into the water led to double bogeys and a 70. He was seven back in a tie for 13th.

It was the third time since 2008 that a player won the Houston Open to get into the Masters, and Herman might be the most unlikely candidate.

Ten years ago, Herman was working as an assistant pro at Trump Bedminster in New Jersey when he played one day with course owner and GOP frontrunner Donald Trump, who wanted to know why he was folding shirts instead of competing against the best. Trump encouraged him to give it another shot, and Herman eventually made it out to the PGA Tour.

This is his fifth full season in the big leagues, and he still wears "Trump" on his golf shirts. Within the past month, Herman has changed from block letters of "Trump" to a logo from Trump's course.

He was artful in closing the deal at the Golf Club of Houston.

Herman and Jamie Lovemark were tied for the lead going into the final round. Lovemark was 4 over through six holes and was never a factor. Herman hung around during Spieth's early charge, and even after Stenson took the lead.

Stenson fell back with a bogey from the bunker on the 14th hole, only to get that stroke back on the par-5 15th.

Herman, however, never flinched. Tied for the lead, he missed the green to the left on the 16th and was in thick grass near the bunker. His chip came out perfectly and dropped for a surprising birdie and a one-shot lead, and he held it.

He faced a long wait at the 18th to hit his tee shot, with a bunker to the right and water all the way down the left. Herman drilled it 316 yards down the middle, hit a safe shot to the middle of the green, and two putts later he was on his way to Augusta National.

The victory also gets Herman into the PGA Championship for the first time.