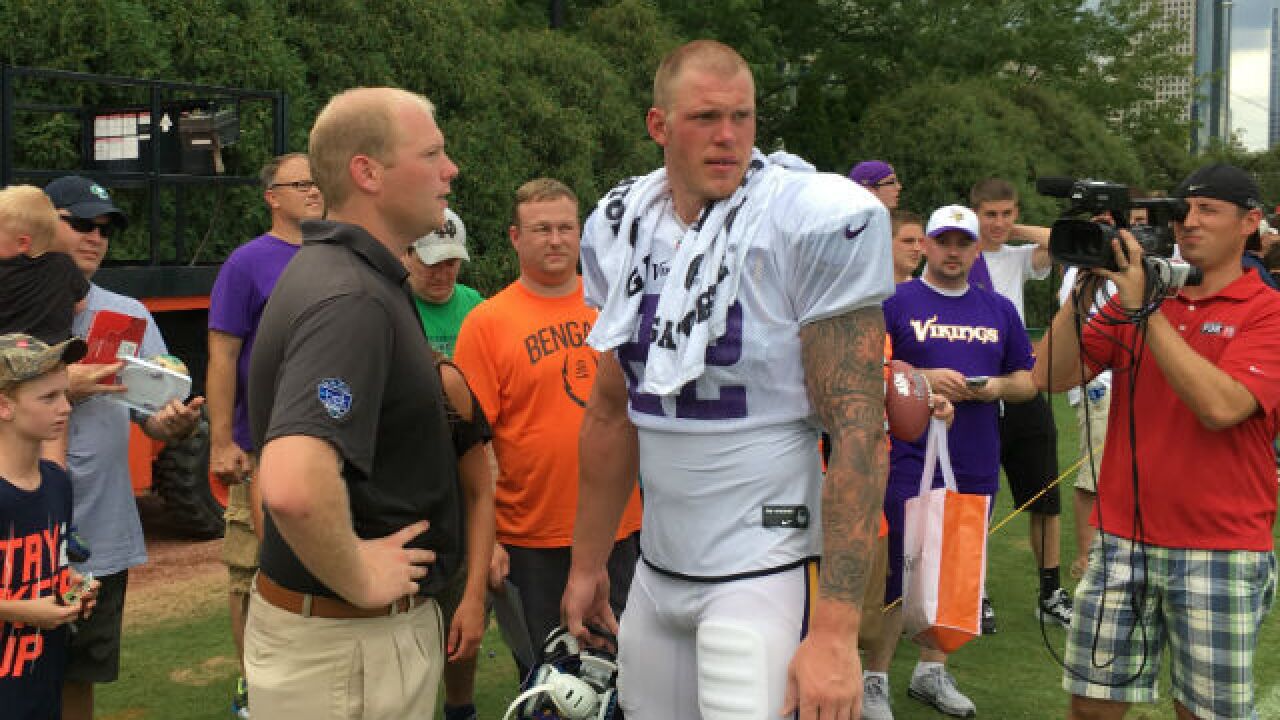 CINCINNATI -- The last time the Minnesota Vikings were in Cincinnati, Kyle Rudolph was out with an injury.

“It was brutal because I knew we wouldn’t be back here for eight years for a real game,” he said. “It was hard to watch then.”

It’s not a real game, but the Elder graduate is back.

The Vikings play the Bengals Friday night at Paul Brown Stadium in the first preseason game. As an added bonus, the Vikings are practicing with the Bengals Wednesday and Thursday. The game is Friday at 7:30 p.m.

“It’s good to be home,” he said. “When the preseason schedule came out, I found out we were playing the first preseason game here, the family was excited, friends were excited.

“Then we found out we were coming to practice for a few days ... You know how the first preseason game goes. We don’t get to see a whole lot of action. But now, they’ll get to see two full days of practice.”

Rudolph went from Elder to Notre Dame, where he was a starter from Game 1. He was the first tight end selected in the 2011 draft and 43rd player taken overall.

He made the Pro Bowl in 2012 and won MVP honors in the game. He’s third on the Vikings’ all-time list for touchdowns for a tight end with 22.

He caught 49 balls for 495 yards last year. He also led the team with five TDs. He was Minnesota’s second leading receiver in terms of catches and yards. Rudolph is a power tight end at 6-foot-6, 259 pounds. But he’s also athletic. He was Greater Catholic League player of the year three times in basketball at Elder.

Coming home is sweet, even for an NFL star.

“It’s a lot of fun,” he said. “It’s crazy to think the last game I played here (at Paul Brown) was my sophomore year in high school. It’s been since 2005 that I’ve been in this stadium. To be back brings up a ton of memories, playing here, growing up here.

“I’m excited to get back and play in front of my family and friends again.”

Elder coach Doug Ramsey and his staff were scheduled to be at the Viking-Bengal joint practice.

“They'll all be here,” he said. “I think eight of them are coming.”

Rudolph won’t get a lot of time with his family, but he’ll get a lot more than he would for a normal preseason game.

“We get a little time (Thursday) afternoon,” he said.” I’ll hopefully get to grab dinner with my family and hang out for a little while.”

Practices with the Vikings are open free to the public. They will be held on the fields west of the stadium. Here is the schedule:

Times are subject to change. Fans are advised to check www.bengals.com/camp.

There are 1,250 bleacher seats plus additional room for fans to stand along the sidelines. No passes will be required to enter.

Fans are allowed to bring small soft-sided coolers, unopened bottles of water and food. Concessions and Bengals merchandise are available to purchase. No chairs or other temporary seating will be permitted.

No more Bengals practices will be open to the public after Friday.