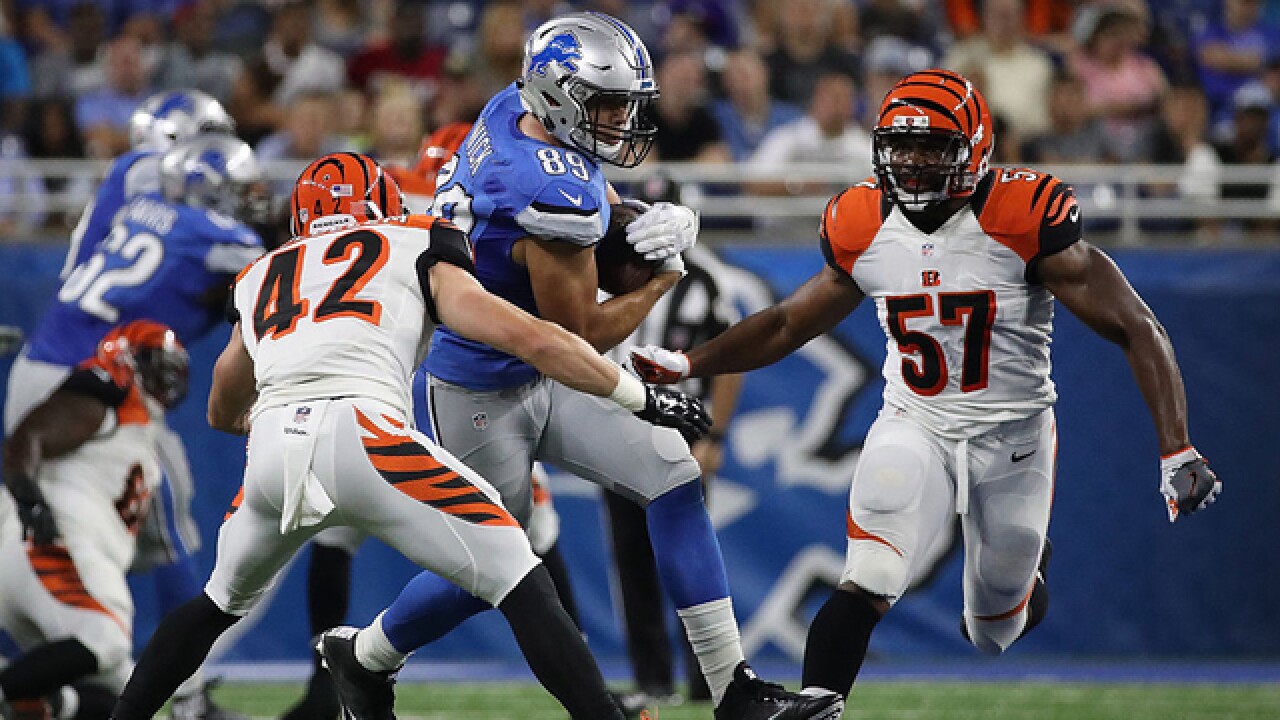 Leon Halip
<p>DETROIT, MI - AUGUST 18: Cole Wick #89 of the Detroit Lions runs for a first down as Clayton Fejedelem #42 and Vincent Rey #57 of the Cincinnati Bengals make the stop during the second quarter of the preseason game at Ford Field on August 18, 2016 in Detroit, Michigan. (Photo by Leon Halip/Getty Images)</p>

DETROIT (AP) — Jeremy Hill scored a touchdown on Cincinnati's first possession, but that was it for the Bengals when their top offensive players were in the game Thursday night.

"I think we need to score more points," Hill said after the 30-14 victory over the Detroit Lions.  "We left too many on the field when we were out there. We did finish one drive, which we didn't do last week, but we need to do a better job of converting third downs."

Hill ran for a 9-yard touchdown,  but this was not a great offensive show by either team's first stringers. Cincinnati benefited from a defensive touchdown and didn't really put the game away until the second half.

Hill hurt his left hand in Cincinnati's preseason opener last week, but he had three carries for 16 yards against the Lions and also caught a pass.

Cincinnati's Derron Smith returned an interception 60 yards for a touchdown in the second quarter.

Former Cincinnati wide receiver Marvin Jones, signed by the Lions in the offseason, had four catches for 65 yards against his former team.

"It was neat seeing them," Jones said. "Those are the guys I've gone against every day for four years, so it was good to kind of be on the other side and go against them."

Detroit's Matthew Stafford was 8 of 11 for 113 yards, but the Lions went without a touchdown until the final minute of the game.

Rookie WR Tyler Boyd continues to impress. After a 40-yard catch in last week's game, the second-round pick  made a nice diving grab of Dalton's pass for a 26-yard gain on Cincinnati's first possession. Boyd later caught a 12-yard touchdown pass from AJ McCarron with 12 seconds left in the first half.

"That's why he's here — he's supposed to make plays," Cincinnati coach Marvin Lewis said. "He's a smart kid who understands how to play this game, and he's done a good job of taking advantage of the opportunities he's getting."

T Jake Fisher walked off slowly in the first half with a sprained right ankle. He took over at RT after Cedric Ogbuehi injured his toe last week, so now Cincinnati's depth could be tested even further.

"I've never seen anything like this. I'm going to start triple-taping my ankles, and I've never taped them at all in my career," T Andrew Whitworth said on the team's injury issues.

Mike Nugent missed a field goal on the opening drive last week against Minnesota, and he missed an extra point and a field goal against Detroit. There's no real competition for his job, but if he falls into an extended slump, perhaps there could be. Nugent did make a 50-yard kick in the fourth quarter.