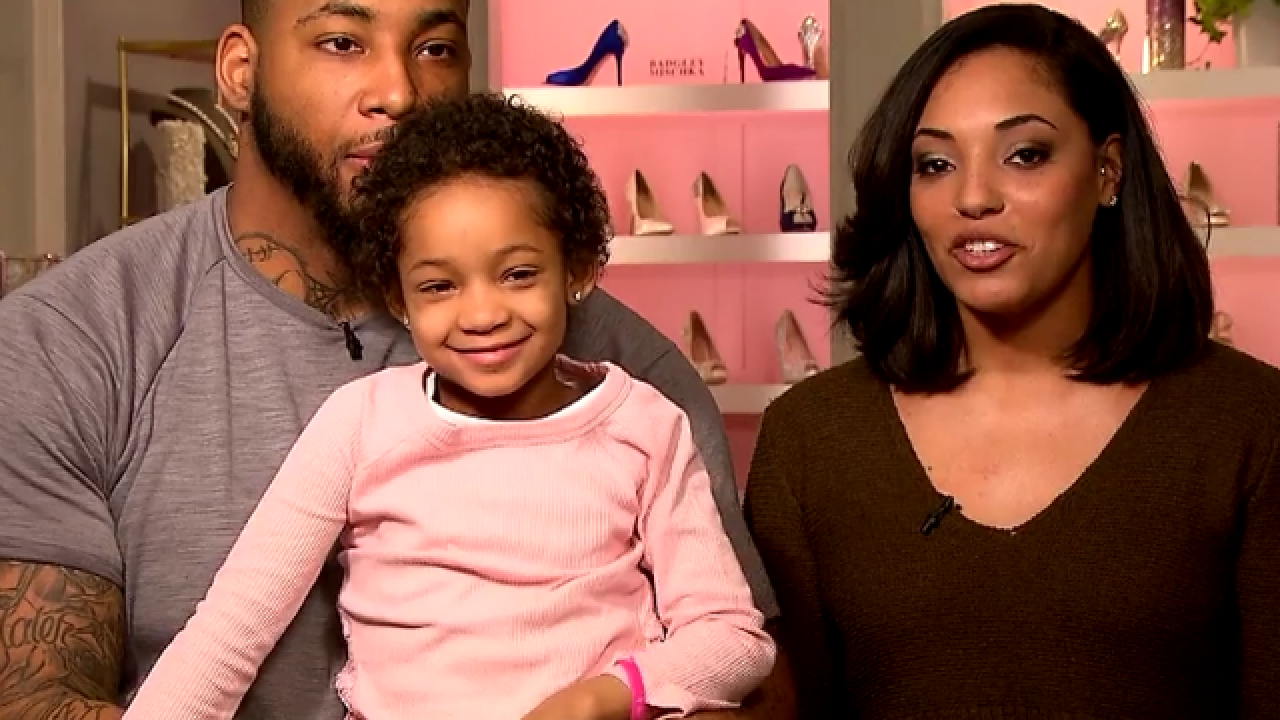 Her dad,  former  Bengal now Houston Texan defensive end Devon Still, will marry the love of his life, Asha Joyce, on May 13 with Leah leading them down the aisle as their flower girl in a pink dress she's designing herself.

And next year, Leah gets to go to real school as a first grader, leaving behind the tutor she had after battling cancer and 50-50 odds of surviving stage-four neuroblastoma, which she was diagnosed with back in June 2014.

Survive she did, her dad documenting their journey on social media and in interviews to raise awareness of pediatric cancer. Devon and Asha, who met in 2012, got engaged in July 2014 — both their birthdays — but they put their wedding plans on hold while Leah underwent treatment for the rare, aggressive form of cancer.

It was a year on March 25 that Leah has been in remission, leaving doctors and medicine and feeling yucky behind.

"I'm doing good," Leah said in a recent interview. "I've been doing interviews like this the whole time. It was like so much interviews. It was so crazy."

The time between diagnosis and remission has flown by, said her 26-year-old dad.

"You know, it felt so long getting to the point of hearing the doctor say that she was in remission. For her to be in remission for over a year now is crazy," Still said.

Still spent a month sleeping next to his daughter at the hospital after treatment began, despite his own still-fresh back surgery. In solidarity, he shaved his head and vowed not to grow his hair back until Leah's returned. With the Bengals at the time, he was placed on the practice squad so he could keep his health insurance benefits.

Thousands of NFL fans and others followed the family's plight online and in the media. The world learned more when Still accepted the Jimmy V Perseverance Award on behalf of Leah at the 2015 ESPYs.

Now, Leah sports short curly natural hair. She hopes to grow it long enough for a bun or ponytail.

While a student and football player at Penn State, Still was already involved in lending support to families fighting cancer.

"But I never knew exactly what it was like for a family to battle childhood cancer because it's not put in the media, you know. With the platform of being a professional athlete, I knew I would be able to get out to the public what it's like for a family to deal with pediatric cancer so more people help out," Still said.

When Leah was first diagnosed, Still reached out to his head coach at the Bengals and let him know what was going on.

"He told me to handle everything I needed back home and he'd take care of things on his end," Still recalled.

He tried attending training camp while Leah was still sick, "but I was unable to focus because I was too busy worrying about my daughter," Still said. That's when the Bengals came up with the idea of placing him on the practice squad.

Leah said "It felt good" to have her dad with her during that scary time. And Joyce, a hair stylist, said she gladly postponed the wedding to make Leah the No. 1 priority.

The two met five years ago, when Still was drafted by the Bengals out of college. A good friend introduced them at a celebratory get-together after he was picked.

"We hit it off from there and we've been going strong ever since," said Still, who described his fiancee as supportive, unselfish and "willing to stand in the fire with you, you know, whatever life throws at you."

During his speech at the ESPYs, Joyce was among those Still thanked, expressing his desire to give her the wedding of her dreams.

When the folks at the wedding resource site TheKnot.com caught wind of that, they reached out, making the couple the recipients of "The Knot Dream Wedding" on May 13, before about 180 loved ones in an elegant room at the main branch of the New York Public Library in Manhattan.

Key elements of the wedding will be voted on by the public, from invitations, flowers and the cake to Joyce's dress, bridesmaids' dresses and the rings.

"I'm not really worried," Joyce smiled, noting she got to choose her theme colors: blush, rose gold and ivory. "We get to pick four different elements of each category, so we have some input. I trust they'll make a good decision."

Leah, meanwhile, is looking forward to throwing flower petals. "I practiced this morning," she said.

Her ordeal further cemented the bond between Still and Joyce.

"We don't really see too many things that can break us apart because we've been through the worst already," Still said.

Now, after a year off from football and his wedding coming together, he looks forward to returning to the game. The family moved to Houston about two weeks ago.

The couple is raising money in the battle against pediatric cancer through a charity wedding registry at Theknot.com. Still's foundation, the Still Strong Foundation, is among four organizations to benefit through cash donations in lieu of gifts.

Still's foundation raises money to help families with a child in cancer treatment pay household bills so they can stay together during treatment. He recalled his trips to Cincinnati during Leah's ordeal that were difficult but necessary so he could keep his health insurance.

Voting on all the details of the wedding began March 16, with invitations, and ends May 10, with the selection of songs. The honeymoon is among the elements up for grabs, so where would they like to go?