Bengals will look for WR, but who will be left? 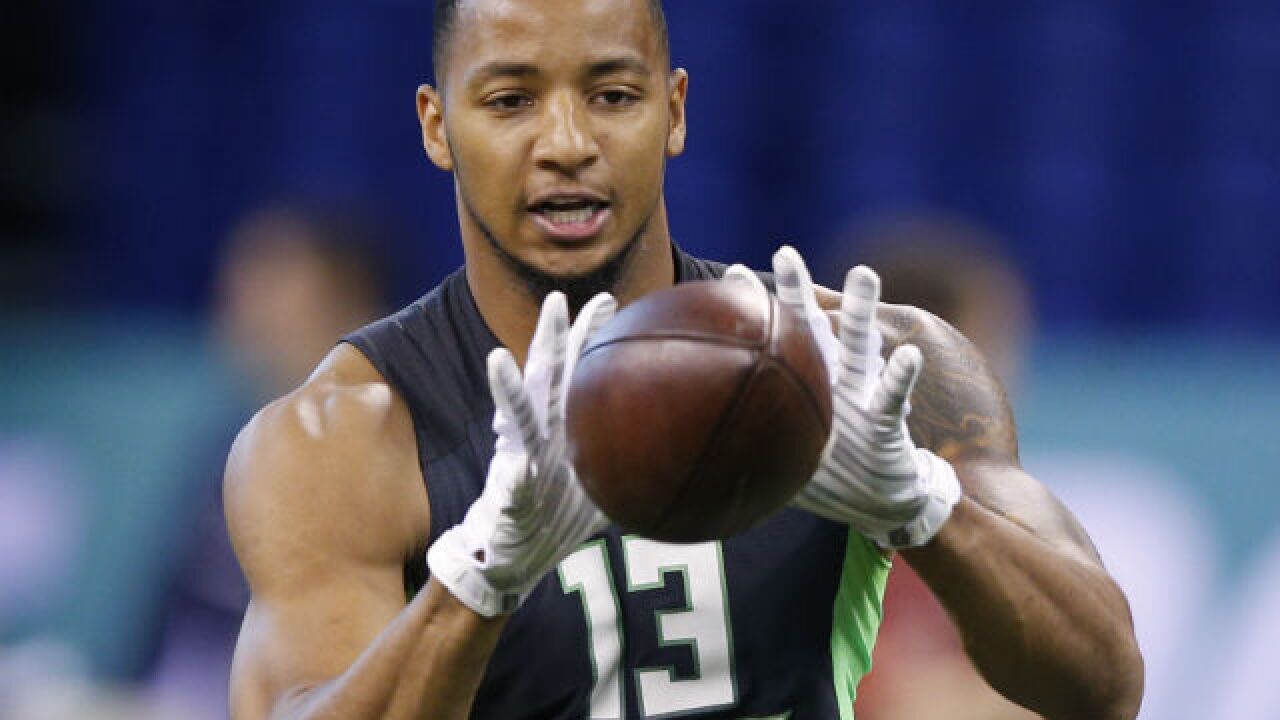 <p><span>INDIANAPOLIS, IN - Wide receiver Josh Doctson of TCU participates in a drill during the 2016 NFL Scouting Combine at Lucas Oil Stadium on Feb. 27, 2016. (Photo by Joe Robbins/Getty Images)</span></p>

CINCINNATI (AP) — Andy Dalton has worked out with TCU receiver Josh Doctson. Both went to the same college. And there's a possibility both could be playing on the same team in the NFL.

The Bengals need another receiver after free agency cost them two of their top three pass catchers. It's the most glaring hole on the roster heading into the draft, one that can be quickly fixed with the right choice.

"I know him," said Dalton, who grew up in suburban Houston. "He's been down at TCU working out when I (was), so I've gotten to know him some. He's a good kid. He's going to be successful with whatever team he gets to. He's a guy that I've watched obviously — because I follow TCU — more than any of those other guys. I'm rooting for him."

The Bengals have developed into an annual playoff contender by keeping the core of their team intact over the past few years. They did it again during free agency, putting most of their money and time into retaining players on a defense that had a lot of starters up for grabs.

The offense took the biggest hit. Cincinnati lost No. 2 receiver Marvin Jones and No. 3 Mohamed Sanu and signed receiver Brandon LaFell. There's still one open spot that they hope to fill through the draft, so Dalton and everyone else will be watching closely to see if a receiver is headed to Cincinnati in the first round.

That may depend on who's left when the Bengals pick at No. 24. None of the first 20 teams are expected to take a WR, according to the NFL.com mock draft, But the three teams picking ahead of Cincinnati are, meaning Washington, Houston and Minnesota.

There are some intriguing choices. The top WRs in the draft, according to CBSSports.com, are Mississippi's  Laquon Treadwell, Baylor's Corey Coleman, Doctson and Notre Dame's Will Fuller.

"You obviously know the top guys that are coming out because that's what everybody's talking about," Dalton said. "I'm not watching film like everybody. You kind of hear what other people say about them. Obviously there are some very talented guys that if they happen to wind up with us, I wouldn't complain about it. We'll see what happens."

Five things to watch in the Bengals' draft:

REPLACING A RECEIVER: Getting the right one is the challenge. Jones provided a deep threat across from A.J. Green and was a good target near the end zone with his height and ability to jump. Jones caught 65 passes for 816 yards and four touchdowns last season. Sanu ran their wildcat packages and also could throw the ball. It's more important to get someone who can fill Jones' role and free up Green.

ANOTHER SAFETY: Both starting safeties were free agents after last season. The Bengals re-signed George Iloka, but couldn't afford to keep Reggie Nelson, too. Safety Shawn Williams, a third-round pick in 2013, started a couple of games near the end of the season when Iloka was hurt, but has been primarily a special teams player during his career — only four starts in the regular season.

"Everybody in this locker room is confident that he'll take the torch and run with it," Iloka said. "I'm not really worried about that."

DEPTH ON THE LINE: The Bengals lost right tackle Andre Smith, and left tackle Andrew Whitworth is nearing the end of his career. Although the Bengals restocked last season by drafting tackles in the first two rounds — Cedric Ogbuehi and Jake Fisher — they could use more depth at the position.

ANOTHER CORNERBACK: Leon Hall was a free agent after last season, when he was the No. 3 cornerback. The Bengals re-signed Adam "Pacman" Jones as their top cornerback, with Dre Kirkpatrick returning for his second season as a starter and Darqueze Dennard ready to move into a bigger role. They'll look at adding a backup in the draft.

SPECIAL TEAMS: The Bengals have had some of the best special teams in the league the past few years in part because they target players in the later rounds of the draft. Look for them to do the same this season to keep the trend going.