Bengals could lose young and old in free agency 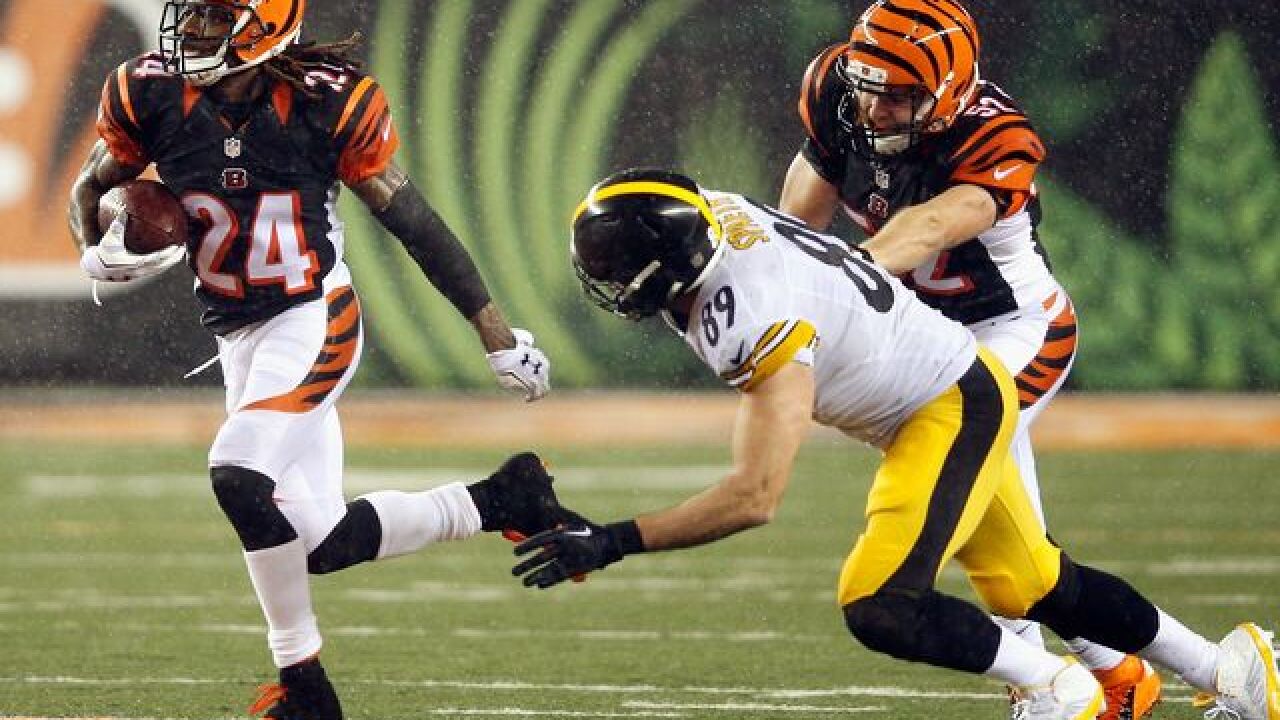 Joe Robbins
<p>CINCINNATI -  Adam Jones #24 of the Cincinnati Bengals runs past Matt Spaeth #89 of the Pittsburgh Steelers on a punt return in the second half during the AFC Wild Card Playoff game at Paul Brown Stadium on Jan. 9, 2016. (Photo by Joe Robbins/Getty Images)</p>

CINCINNATI – With a dozen starters and regulars eligible to cash in on unrestricted free agency, the Bengals could be in for a big roster turnover when the NFL's free agent signing period begins at 4 p.m. Wednesday.

When it comes to matching offers, the Bengals could have the hardest time keeping up with the Joneses. Cornerback/returner Adam Jones and wide receiver Marvin Jones appear to be drawing the most interest from other teams and could spark a bidding war.

Adam Jones, also one of the league's top returners, is being targeted by no less than seven teams, according to media reports, with the Cowboys and Dolphins expected to make the biggest play. The Ravens and Jets apparently entered the picture this week.

The raiding teams are expected to include two former Bengals coordinators now head coaches, Hue Jackson of the Browns and Mike Zimmer of the Vikings. Jackson makes no secret about wanting Marvin Jones, and Zimmer reportedly has eyes on three of his former defensive protégés,  Lamur, Iloka and Nelson.

And remember that former Bengals secondary coach Vance Joseph took over as Dolphins defensive coordinator during the offseason.

There hasn't been much talk from the Redskins, but the head coach, former Bengals offensive coordinator Jay Gruden, might have some of his former players on his list, too.

Talking to ESPN this week, Adam Jones said he has been happy in Cincinnati but he is looking for a "fair" contract. No doubt Mike Brown is taking that to mean  "rich and long-term."

Jones, coming off the best season of his controversial career, said his first priority is "a team that really understands me and wants me as a person. I've been through a lot. I visit my past every day to make sure I don't go there.

"I'm not trying to break the bank, but I truly feel I can play this game for four or five more years at the top level."

That's wishful thinking for a player turning 33 in September. Still, Jones doesn't have as much wear and tear because he missed two full seasons due to a year-long NFL suspension and injury.

The Bengals would probably retreat from a bidding war for the Joneses, but they will try to re-sign some of their free agents at the right price - especially one of their receivers. However, fans have probably seen the last of Hall, Smith and fellow tackle Eric Winston. The Bengals have stocked up defensive backs and tackles with high picks in the last few drafts.

Hall, 31, was a mainstay in the secondary and one of the key players on Bengals' five-year playoff run, but two torn Achilles and age have slowed him down.

Some team will be happy to put Smith, 29, on their starting line, but he never lived up to his first-round billing, and the Bengals have Cedric Ogbuehi and Jake Fisher, their top two picks last year,  waiting in the wings.

Winston, 32, president of the NFL Players Association, has been a good clubhouse leader and reliable injury replacement the past two seasons, but time marches on.

The Bengals have two things going for them when it comes to keeping some of their free agents. Some players might rather stay on a playoff team, despite its inability to get past the first round.

Also, the Bengals have the 12th highest amount of cap space available at $38,051,207, according to overthecap.com.

The Bengals usually keep their free-agency plans close to the vest, so predicting players they might target on other teams – if any – tends to be fruitless until offers get exchanged and signings begin.

SEE a list of each team's unrestricted free agents.